WASHINGTON, D.C. -- Months after the Taliban's takeover of Afghanistan, the country's economic prospects remain grim, with some estimates placing 97% of Afghans below the poverty line by mid-2022.

The latest Gallup data from Afghanistan offer a similarly bleak assessment, showing that Afghans surveyed as the Taliban took control in 2021 were almost universally struggling to get by on their household income. Most were finding it difficult to afford food, and almost no one saw their local economy as getting better. This situation is only likely to get worse as the effect of Russia's invasion of Ukraine ripples across global food markets. 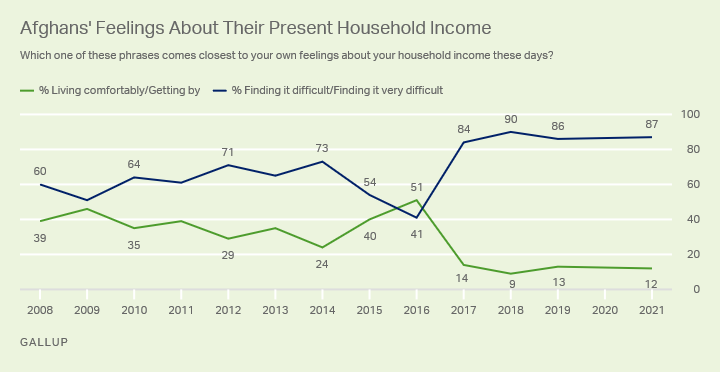 Line graph. Afghans' views of about their current household incomes. In 2021, 87% of Afghans reported finding in very difficult or difficult to get by on their current income.

Since the Taliban took over the country in August, the value of Afghan currency has declined precipitously, losing as much as 11% of its value against the U.S. dollar in a single day in December. At the same time as the value of Afghans' money has dropped, unemployment has surged, with an estimated 500,000 Afghans having lost their jobs since the Taliban retook power.

Money for Food, Shelter a Problem for Most Afghans

According to the World Food Programme, food prices in Afghanistan have risen by nearly 40% in the past eight months. An estimated 95% of Afghans do not have enough to eat or enough money for food.

At the time of the survey, three in four Afghans (75%) said there had been times in the past 12 months that they did not have enough money for food. This is the highest level in Gallup's trend since 2008, though it is statistically similar to the 72% of Afghans who said the same in 2019. 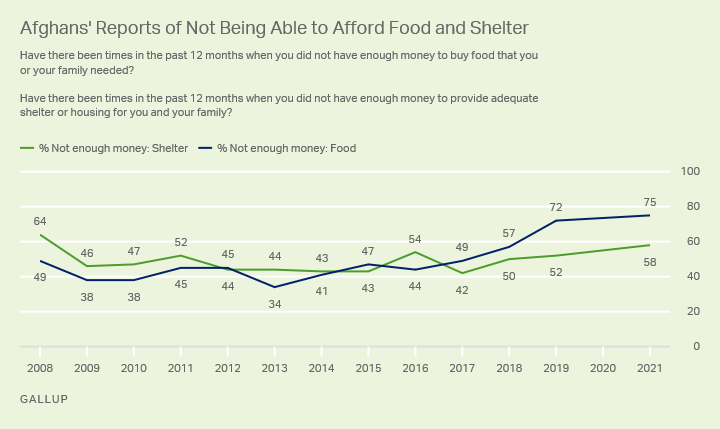 Record-High Pessimism About the Economy 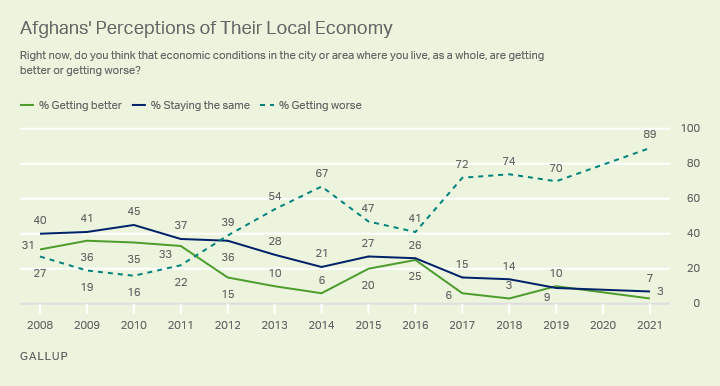 Line graph. 89% of Afghans say their local economies are getting worse, up from 70% who said the same in 2019.

Since the Taliban seized power last August, Afghanistan has been frozen out of much-needed global aid, making life increasingly unbearable for residents who struggled long before the U.S. withdrawal.

Without a sustained, large-scale humanitarian intervention, conditions for the Afghan people will continue to deteriorate. Such an intervention appears unlikely to happen anytime soon, with billions of the former government's assets still frozen. The World Bank has transferred hundreds of millions of dollars to UNICEF to provide immediate assistance, and the United States Agency for International Development has announced it will provide an additional $308 million in humanitarian aid to Afghanistan in 2022 -- but this still falls far short of the U.N.'s $4.5 billion funding appeal to assist those Afghans who are most at risk.

These funds will also not go nearly as far as they might have, given the increased prices for food around the globe in recent weeks. Aid agencies have estimated that costs to provide humanitarian assistance to Afghans may rise by up to 20% because of the war in Ukraine.