WASHINGTON, D.C. -- The Taliban's recent decision to renege on its promise to allow girls to attend school past sixth grade is a stark reminder of how much life has changed for Afghans since the group returned to power last year -- and Gallup's surveys in the country show it hasn't been for the better.

As the Taliban completed its takeover of Afghanistan last year, nearly all Afghans (94%) rated their lives poorly enough to be considered suffering. This was not only a record high for Afghanistan, but also the highest level of suffering that Gallup has measured for any country since 2005. 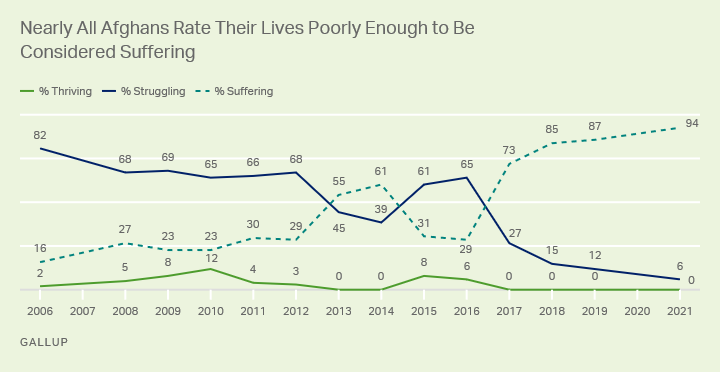 Gallup classifies individuals as "thriving," "struggling" or "suffering" according to how they rate their current and future lives on a ladder scale with steps numbered from zero to 10, based on the Cantril Self-Anchoring Striving Scale. Those who rate their current lives and anticipated lives in five years a 4 or lower are classified as suffering.

Gallup surveyed Afghanistan as the Taliban took control and the U.S. completed its withdrawal, further exacerbating the already bleak economic situation in Afghanistan. However, suffering has been on an upward trend since 2017, as Taliban-fueled violence increased and continued to rise in the face of a prolonged Taliban offensive that seized control of more parts of the country.

Nearly All Afghan Women and Men Are Suffering 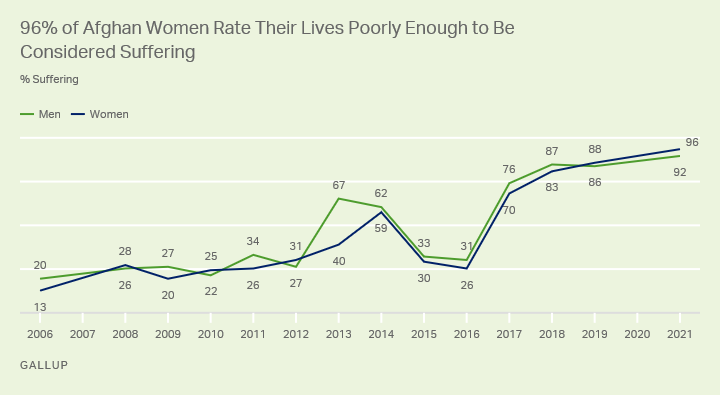 Afghan women are particularly pessimistic about the trajectory of their lives in the future. This is not surprising given that the Taliban has restricted women from working in any industry other than healthcare or primary education, curtailed women's ability to travel on their own, and banned them from secondary and higher education. When asked how they would rate their lives in five years on a scale of zero to 10, the average score was 1.8 in 2021, the lowest level in Gallup's global trend for women in any country. For men, the average score in 2021 was 2.1.

Afghans are experiencing suffering on an unprecedented scale. In no other country since the trend began in 2005 has a larger percentage of the population rated their lives poorly enough to be considered suffering. And Afghans have little hope that their situation will improve anytime soon. For Afghan women in particular, the future is bleak without access to education for the country's girls.

In recent weeks, global attention has shifted away from Afghanistan, but the crisis in the country has not abated. Humanitarian aid agencies have previously issued desperate calls for funding to provide assistance, including the largest single country aid appeal ever by the United Nations.

And, before the Russian invasion of Ukraine, the U.S. and other countries pledged substantial amounts of aid. However, in the wake of the crisis in Ukraine, it is unclear how much additional aid will be forthcoming.