skip to main content
Gallup Blog
For Democrats in the Workplace, Engagement Rebounds

The frequency of volatile political conversations in the workplace increased in the past year, according to multiple sources:

We looked at the relationship between political change and the workplace in a different way, by analyzing patterns in Gallup's ongoing tracking of employee engagement before and after the election.

The results show that the percentage of workers whom Gallup classifies as engaged dropped from 34% to 30% among self-identified Democrats immediately following the November 2016 election. The percentage of "not engaged" Democrats increased from 50% to 55% during the same period. "Actively disengaged" Democrat employees remained flat at 15%. While these are small changes on an absolute basis, they are statistically significant and meaningful.

In contrast, Republican engagement remained constant during the same time period. Engagement among independents rose slightly, from 30% to 32%.

We don't have precise measures of changes in actual productivity of the Democrats whose engagement dropped after the election, but past analysis suggests that it could have been meaningful. Gallup research shows that engaged employees -- those who are highly involved in and enthusiastic about their work -- are not merely "happy" employees; they regularly outperform their counterparts in productivity, sales and profitability.

But, even if the drop in engagement for Democrats may have created a short-term influence on productivity, the good news for employers is that it doesn't appear to have lasted. People have essentially gotten back to work.

Some working Democrats saw their engagement levels drop for a period of time after the election. This fact highlights the need for business leaders and managers to increase their efforts to make sure employees feel connected to the teams they work on -- particularly during periods of increased social tension.

Effective coaching of employees does not necessarily require dealing with politics directly -- nor sharing the same political views as your direct reports. Employees tell Gallup that they want managers who frequently check in with them, collaborate with them on performance goals and care about them as people.

And the potential upside is great: Gallup employee engagement tracking shows that, on average, only a third of U.S. workers are engaged at work. But those engaged employees regularly outperform their counterparts on objective business measures including productivity, retention and profit. Two-thirds of workers are either not engaged or actively disengaged (i.e. are working against their employer).

Interested in learning more about how to improve employee engagement in your organization? Download the State of the American Workplace report.

Ryan Pendell is a writer at Gallup. 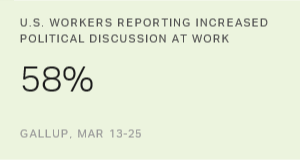 About six in 10 U.S. workers report discussing politics more often at work over the past four months, but few say it has affected their ability to get work done. 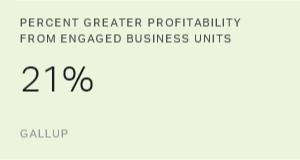