These findings come from an in-depth survey about Americans’ experiences with chaplains conducted by Gallup for the Chaplaincy Innovation Lab at Brandeis University. For the March 2022 survey, chaplains were defined as “clergy or other religious guides or spiritual caregivers who serve people outside of churches or other houses of worship, in settings such as hospitals, the military, prisons, or institutions of higher education, to name a few examples.”

Encounters Not Common; Most Often Occur in Healthcare Settings

Among the 25% of U.S. adults polled in March who report that a chaplain assisted, counseled or visited with them at some point in their lives, either in person or virtually, 7% said it happened within the previous 12 months. Another 7% said their encounter had occurred two to five years earlier, while 11% said it happened six or more years ago.

Half of those ever meeting with a chaplain say the encounter occurred in a healthcare setting, such as a hospital, palliative care facility or hospice. The next most common context is the military, mentioned by 11%, while a variety of other settings are each mentioned by less than 5%.

Most people who have ever interacted with a chaplain say they did so as the primary recipient of the chaplain’s care or support (56%). Others were visiting someone (40%) and/or were caregivers themselves (32%).

Reflecting the combination of religious and nonreligious people in U.S. society, not everyone who has ever interacted with a chaplain is religious. A 57% majority of this group describe themselves as at least somewhat religious, while 17% say they are “not too religious” and 25% “not at all religious.”

The religion of chaplains, as reported by those interacting with them, also mirrors society. The vast majority of people who have been served by a chaplain at some time say the chaplain was from a Christian faith, including 51% Protestant and 21% Roman Catholic. A combined 4% report that the chaplain was some other religion, while 22% aren’t sure what the chaplain’s religion was.

Nearly two-thirds perceive that the chaplain’s religious beliefs were either very (36%) or somewhat (27%) similar to their own. The rest either say their religions were different or they are unsure.

Chaplains Provide Support on a Range of Topics

The subject matter that people say they discussed with chaplains varies widely. However, in line with the preponderance of interactions happening in healthcare settings, the topic of death and dying is among the most common, mentioned by 53%. Similar proportions say they discussed mental or emotional health (53%), dealing with change (52%), or dealing with loss (50%).

Closer to four in 10 adults who have ever interacted with a chaplain say they discussed passages from religious or spiritual texts (42%) as well as their religious views (39%). Four in 10 discussed family dynamics. A third or less say they discussed moral or ethical concerns, their physical health, or relationship issues.

The versatility of chaplains is also evident in the types of support they provide to people, ranging from prayer and spiritual comfort to various forms of practical assistance.

Most people say that the interaction they had with a chaplain was valuable to them -- 44% call it very valuable and 32% moderately valuable. Another 17% say it was only a little valuable, while 7% describe it as not valuable at all.

Additionally, people who have interacted with a chaplain almost universally ascribe positive characteristics to that person, with 95% calling them compassionate and roughly nine in 10 recalling them being a good listener, spiritual, helpful, trustworthy and knowledgeable. Relatively few say the chaplain was intrusive, pushy or condescending.

Chaplains may not be as visible in society or familiar to people as clergy, rabbis, imams and other faith leaders who lead weekly religious or prayer services and perform special rituals like weddings, funerals and bar mitzvahs for people in the community. Many people never encounter a chaplain, but those who do -- representing one in four Americans -- report that the experience was both positive and beneficial.

The experience is also unique in that, occurring as it does outside of a religious setting, it often connects faith leaders with nonreligious people -- constituting 42% of those who have ever interacted with a chaplain. As such, chaplaincy provides an important mechanism for people from diverse religious orientations to receive spiritual care in a moment of need and reportedly in a way that, for most who’ve experienced it, is compassionate and helpful rather than unwelcome or uncomfortable.

Results for the Brandeis University Chaplain Survey are based on self-administered web surveys conducted March 2-23, 2022, with a random sample of 1,096 adults, aged 18 and older, who are members of the probability-based Gallup Panel. This includes 278 adults who have ever interacted with a chaplain. 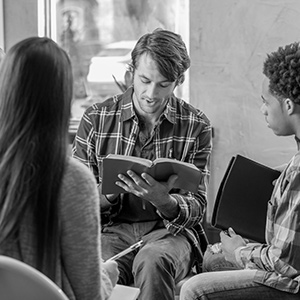 Good Relationships Are a Constant in Young People's Lives

A new study by Gallup and the Wellbeing for Planet Earth Foundation provides new insights into the wellbeing of young people around the globe.