Foreign trade has become a significant issue in the presidential campaign. Donald Trump has proposed to renegotiate many aspects of trade with China as a centerpiece of his campaign, and Bernie Sanders continues to focus on rewriting "disastrous" trade pacts that he says cost American jobs.

This focus on the pros and cons of foreign trade is not new. Back in the fall of 1993, many of us remember Texas businessman (and 1992 and 1996 independent presidential candidate) Ross Perot debating Vice President Al Gore on the merits of NAFTA -- an agreement that was passed by Congress and signed into law in late 1993, and that is still controversial to this day.

Gallup has a long-standing trend question on foreign trade, and the most recent results reflect American attitudes toward foreign trade that are positive at this point in history. 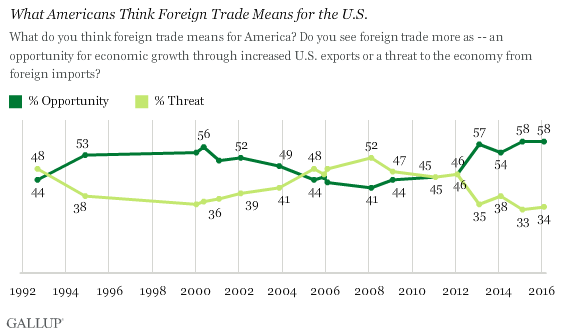 This question was first asked back in 1992, then again in 1994, and then on a continuing basis beginning in 2000. But, as is always the case with survey questions asking about complex issues, wording matters.

The Gallup question juxtaposes two approaches to trade and asks the respondent to choose between them. The first option talks about U.S. exports and the "opportunity for economic growth" they provide. The second option talks about imports and the "threat to the economy" they provide. So the question sets up the two sides of trade -- goods going out and goods coming in -- and casts the former as a good thing for the country and the latter as a bad thing.

Over the life span of asking this question, the imports/negative viewpoint prevailed in 1992 (during a bad economy) and even before (and during) the recession of the mid-2000s. The opportunity/positive viewpoint was on top in 1994 and in the early 2000s, and has soared back on top in the past several years. We've had four consecutive years now in which the majority of U.S. adults have come down on the positive side of the foreign trade equation as measured by this question.

But other questions measure Americans' attitudes in different ways. A set of questions on trade was released recently by Bloomberg with the headline: "Free-Trade Opposition Unites Political Parties in Bloomberg Poll."

The wording of the central question about trade in that poll was:

"Turning now to trade, generally speaking, do you think U.S. trade policy should have more restrictions on imported foreign goods to protect American jobs, or have fewer restrictions to enable American consumers to have the most choices and the lowest prices?"

Several observations about this question:

We can imagine a parallel question focusing on exports -- something like:

The working hypothesis would be that the first option would have the larger response.

I often say that no survey question is a bad question because we learn something about American public opinion from the responses to almost anything we put in front of them -- no matter how we word it. The challenge is to be cognizant of the effects of specific wording stimuli when we analyze and report the results.

The two questions I've reviewed here tell us that when given options discussing the possible advantages of exporting versus the possible disadvantages of importing, the exporting positives win with the American public. But when given just a statement about the negatives of importing, the public will agree with a proposal for more import restrictions. 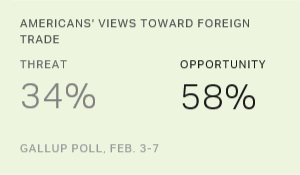