Most of us have a rough idea that social class denotes a position on some type of social or economic hierarchy, from top to bottom. We recognize that the rich people in town who have the biggest house and the fanciest cars and the country club memberships are in a different social class than those who live in a small house with a beat-up automobile on the other side of town. But there is a lot of disagreement on just what social class is, and how it is defined.

Sociologists distinguish between objective social class and subjective social class. The former is based on an effort to define class using hard data -- usually income and wealth. Researchers at Pew Research Center, for example, defined "middle class" as those whose income is between two-thirds to double the national median income (or, in some analyses, the median income in one's metropolitan area). We remember the focus on the class designated as the "1%," usually defined as the group with the top 1% of either income or wealth in the nation. Although it's not a class by name, the federal government uses objective income data to define the federal poverty level, below which one is eligible for certain benefits.

Subjective social class, on the other hand, is based on people's perceptions -- asking people to make a "subjective" judgment about their social class. And while these self-perceptions are generally related to objective data, they don't have to be. People are free to believe they are in any social class they choose.

Here at Gallup, we measure subjective social class by asking survey respondents to place themselves in one of a list of five classes: upper class, upper-middle class, middle class, working class and lower class.

My colleague Robert Bird and I analyzed the relationship between these subjective placements and demographic variables. The analysis showed that, as expected, income and education are powerful determinants of the social class into which people place themselves.

But we noted that even at the lowest levels of income and education, many Americans eschewed the label "working class." As we concluded: "Americans' resonance with the label 'working class' is not as substantial as might have been expected, even for those without college degrees."

Why might this be the case? A new analysis provides at least a partial explanation. Many older Americans who are retired -- presumably no matter what their occupations or income were earlier in their lives -- seem to be hesitant to describe themselves as working class since, in a literal sense, they are no longer working. To be specific, 35% of nonretired Americans classify themselves as working class, almost as many as identify as middle class. Among nonretired Americans, by contrast, only 15% identify as working class, while 56% say they are middle class.

The usual conception is to think of working class as a symbolic label representing a place in the socioeconomic hierarchy. After all, people of all classes work (even the CEO of Apple is a worker). The presumption for many, I think, has been that working class connotes a certain socioeconomic positioning that is below that of what is associated with the "middle class" but above that which is associated with the "lower class." That was Gallup's assumption when we included working class in the list of social class labels we use to measure subjective social class.

But the fact that retirees are much less likely than those who are not retired to say they are working class -- regardless of their actual income and education -- suggests that for some, working class is a more literal label; namely, an indication that one is working. When not working, some people obviously think they can't choose that label to describe themselves, regardless of their actual income and education or where they stand in the socioeconomic hierarchy.

Working class is the only subjective social class label in Gallup's list that is specific about what one does, different from the other modifiers -- upper, middle, lower -- that are explicitly hierarchical adjectives. This could sow confusion in the minds of some of those attempting to place themselves into these social class categories.

This suggests that researchers, including those of us here at Gallup, should consider using a subjective social class scale that consists of similar hierarchical adjectives -- lower, middle and upper -- without inserting "working" into the mix. (We have used such a scale in the past, but in recent decades have shifted to the scale that includes working class.) For surveys conducted with visual stimuli -- internet, mail or in-person surveys -- researchers can consider a scale that doesn't have labels at all, such as one developed by researchers at UCSF. There may be other approaches that handle subjective social class in still different ways.

Meanwhile, politicians and others may recognize that when addressing older groups, middle class is a much more appropriate designator than working class if they intend to resonate with as many people in the audience as possible. And, when addressing those who are not retired -- the bulk of Americans -- using working class as a label for those not at the extremes of the social class hierarchy may be as appropriate as the use of middle class.

Measuring subjective social class is important. Americans' perceptions of where they are in the social and economic hierarchy can have important consequences for their behavior and political actions, as we have seen at many junctures throughout history. We in the research business will continue to refine just how we develop labels that most fruitfully resonate with the way the people themselves think about their position in the socioeconomic hierarchy. 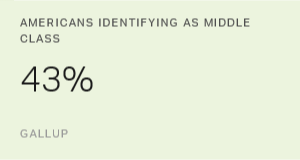 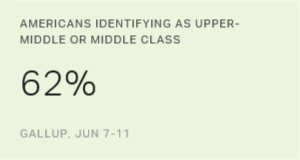 Americans are considerably less likely now than in 2008 and earlier to say they are middle or upper-middle class, while more now identify as working or lower class. About half of Americans now claim middle-class status.