Editor's note: This article originally appeared in the Yemen Times and reflects the situation for young Yemenis before the unrest in their country this year.

ABU DHABI, UNITED ARAB EMIRATES -- Like many countries in the region, Yemen is experiencing a "youth bulge," with nearly half of its population (46%) younger than age 15. Gallup's survey of 15- to 29-year-old Yemenis for the Silatech Index in 2009 and 2010 found that nearly half of these young people (49%) are neither students nor in the workforce.

The combination of a struggling economy and scarce jobs presents a stark challenge for a country with one of the highest fertility rates in the world, where each woman averages 5.4 children and the population is expected to double by 2033. These challenges are likely compounded as the fear of violence rises while months-old protests escalate in Yemen.

Young Yemenis aged 15 to 29 have a particularly negative outlook on the economy and employment opportunities in their country compared with young people in other Arab League countries. When asked about the city or area where they live, 84% of young Yemenis at the time of the survey said it was a bad time to find a job. Seventy percent said the current local economic conditions were not good and half of them feel their local economy is getting worse.

The prospect of finding a job is universally considered to be difficult, but young men (89%) are slightly more likely to say it is a bad time to find a job than are young women (80%).

Despite their increased pessimism relative to young women about economic conditions and the availability of jobs, young Yemeni men demonstrate a strong willingness to change their lives and employment situations in the face of adversity. If they were unemployed and looking for work for more than six months, young men are much more likely than young women to say they would take a job beneath their skill level (77% vs. 50%), retrain for a different career (74% vs. 54%), start their own business (74% vs. 58%), or relocate to another country (65% vs. 23%). However, young women are more likely (78%) than young men (64%) to say they would perform home-based work.

Overall, an overwhelming majority express a willingness to make the efforts needed to bring about change in their employment status, possibly leading to improved standards of living and increased hope.

This Silatech Index analysis is conducted by Gallup scientists and researchers pursuant to the Silatech-Gallup partnership. In addition to systematically measuring the perceptions of young people across the region on the challenges related to employment and entrepreneurship, Gallup analysts lead the effort in disseminating the findings of the Silatech Index to regional and global leaders and institutions engaged in addressing the challenges surrounding young people and employment in the region.

Results are based on multiple surveys involving face-to-face interviews with a total of 1,500 Yemeni nationals, aged 15 to 29, between March 2009 and February 2010. For results based on the total sample, one can say with 95% confidence that the maximum margin of sampling error is ±3.1 percentage points. The margin of error reflects the influence of data weighting. In addition to sampling error, question wording and practical difficulties in conducting surveys can introduce error or bias into the findings of public opinion polls.

Work status definitions note: The "not students, not in the workforce" group represents the percentage of young people who are not students and who are not employed, including the unemployed.

Before Conflict, Many Young Libyans Doubted Role in Progress

Before the current conflict, Gallup found young Libyans less likely than other young Arabs to believe they could help the country make substantial progress. Sixty-six percent of young Libyans said young men could help and 55% said young women could, versus medians of 94% and 79% in middle-income Arab countries.

Young people in several Arab countries became less likely in 2010 to believe their leadership fully uses their human capital. Young Egyptians' perceptions experienced one of the largest declines: fewer than 3 in 10 say Egypt's leadership maximizes youth potential, down from almost 4 in 10 in 2009. 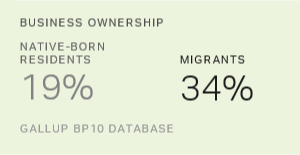