WASHINGTON, D.C. -- A majority of Americans (55%) say crime is an extremely or very serious problem in the U.S. -- about the same level of concern they had in 2011, but down slightly from 2010. Another 38% view the U.S. crime problem as moderately serious, while one in 20 consider it not serious. 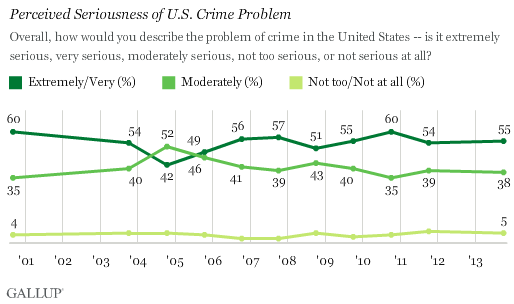 Americans see their local crime situation in almost the opposite way. A slim majority (51%) report that the crime problem is not too serious or not serious at all in the area where they live, up from 47% in 2011. This increase in optimism comes in the context of a rising national crime rate. About one in eight (13%) see the local crime problem as extremely or very serious, and 35% assess it as moderately serious. 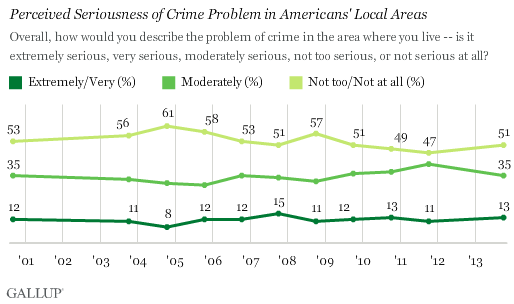 Americans' likelihood to see crime as less of a problem in their local areas than nationally exemplifies a pattern in polling, whereby people tend to rate local situations better than national ones. This may help explain the virtual absence of crime in the national political discourse, even though majorities have generally rated the issue as an extremely or very serious problem in the U.S. since 2000. While many Americans appear to believe crime is a problem, it seems to be one that does not directly affect or threaten their lives.

Underscoring this point, Gallup's latest measure of the nation's Most Important Problem, from early October, found little mention of crime or violence as the nation's top problem. This is in line with the trend since the 2008 recession.

Majority of Americans Feel Safe in Their Neighborhoods 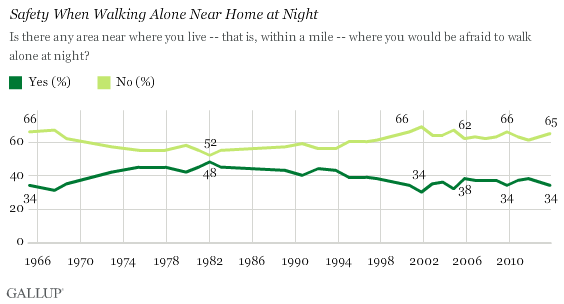 While the proportion of Americans saying they do not feel safe walking near their homes at night is on the lower end of Gallup's historical trend, some groups do feel especially vulnerable. Women (44%) are more likely than men (24%) to say they are afraid. This gender divide has been evident in previous surveys and in other developed countries.

From the famous "Willie Horton" ad during the 1988 presidential campaign to President Bill Clinton's passing an anti-crime bill early in his presidency to the "tough on crime" approach of popular politicians like former New York Mayor Rudy Giuliani, crime has historically been a salient political issue at the national level. But judging from last year's presidential election that scantly mentioned crime in the various policy debates, this is no longer the case -- even as Gallup finds, for yet another year, a majority of Americans rating crime as an extremely or very serious problem for the nation. Crime has taken a back seat as monumental domestic concerns have flared up over the past decade -- terrorism, war, and an economic crash -- but another reason it hasn't received as much emphasis could be that the majority of Americans don't believe crime is a threat where they live, and feel safe in their neighborhoods.