PRINCETON, NJ -- Young American women are more likely than young men to be parents, and to have their first child earlier. Twenty-four percent of adult women younger than 30 in the U.S. say they had their first child before they turned 21, compared with 10% of men. And 38% of 18- to 29-year-old females currently have a child, while 26% of men in the same age group do. 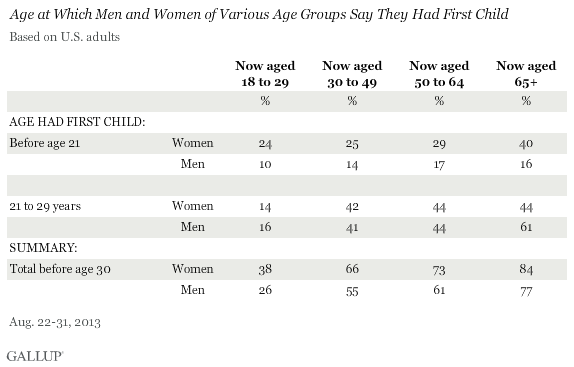 These findings are from on an Aug. 22-31 Gallup survey, in which 5,100 national adults were asked a number of questions about their experiences and desires with regard to having children. The study includes 3,899 adults who have had a child at some point in their life. In the same study, Americans, on average, favored 25 as the ideal age for a woman to have a child and 27 as the ideal age for men.

The percentages of men and women aged 18 to 29 who say they are already parents is low relative to adults aged 30 and older who had a child before 30. This is at least in part because many younger adults have a number of years remaining before they turn 30.

One in Four Women Still Becomes a Mother Before Turning 21

While the percentages of men and women having children before age 30 have declined in the U.S., the gender gap in having a child before 30 has not narrowed, and in fact is wider today than it was for older generations.

More specifically, nearly 1 ½ times as many women as men aged 18 to 29 have a child, 38% vs. 26%. By contrast, women in the middle-aged groups (aged 30 to 49 and 50 to 64) are only slightly more likely to have had a child before age 30 than men of the same age range, while the gender gap on this nearly disappears among seniors.

Complete data by age for this measure are found on page 2.

Although men and women are waiting longer, on average, to have a child than their parents and grandparents may have, Gallup finds that most of those who haven't had children still hope to someday. The appeal of parenthood remains strong. However, the responsibilities involved in raising a child have major financial and lifestyle implications. Thus, any differences between men and women in how early each starts having children can affect the trajectory of their lives in profound ways -- some positive, but some also challenging.

Future Gallup research will examine the socioeconomic status of men and women who had their first child earlier rather than later, including their marital status, household income, and formal education.

For results based on the sample of 3,899 parents, the maximum margin of sampling error is ±2 percentage points. 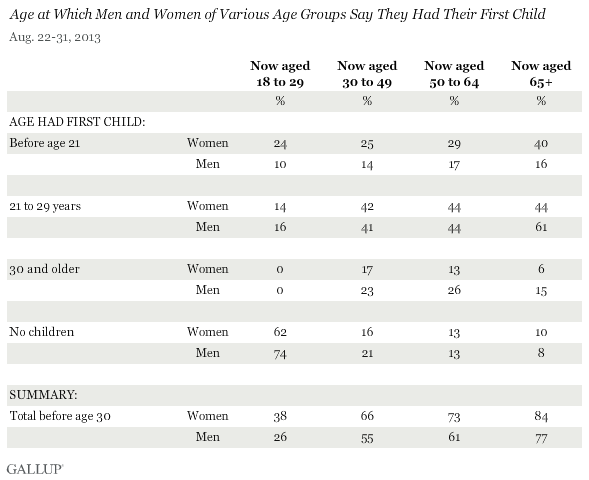