PRINCETON, NJ -- President Barack Obama's job approval rating averaged 40% in Gallup Daily tracking for the week ending on Sunday. This is down slightly from 41% in each of the three prior weeks, and from 43% in late October. The latest reading ties Obama's lowest weekly average, measured in late summer 2011 as the president battled Congress over the debt ceiling. 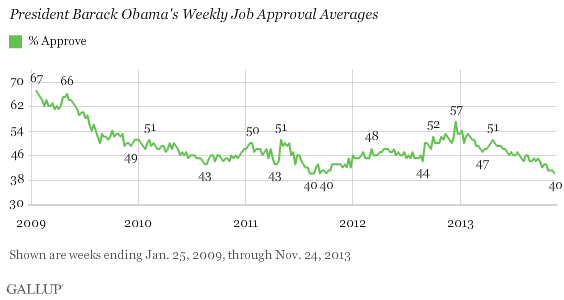 After Obama's weekly approval ratings dropped to 40% in 2011, they recovered to better than 50% in time for the November 2012 election in which he won a second term, and surged to 57% in the week after last year's school shooting in Newtown, Conn. However, his approval ratings have steeply declined since, reversing only briefly in April after authorities found the Boston Marathon bombing suspects.

Obama's job rating stood at 43% in the last full week of October, reflecting a slight decline from 45% in late September. That two-percentage-point erosion was likely owing to the government shutdown in early October or the flubbed opening of the healthcare exchanges, or both. The subsequent decline to 40% spans a period of more bad publicity for the Affordable Care Act, and for Obama himself, over news that millions of Americans are having their existing insurance policies canceled because those policies don't meet the government's new requirements.

Approval Down Most Among High-Income Earners, Postgrads

Gallup's weekly trends indicate that Obama lost the most support over the past month among Americans with high socioeconomic status, particularly postgraduates and those earning upward of $90,000 per year.

Possibly reflecting the higher educational attainment of Easterners, on average, than those elsewhere, he has also lost proportionally more ground among those living in the East, as well as among older adults relative to young and younger-middle-aged adults. In fact, his approval rating is unchanged among young adults, while it is down five points among seniors. 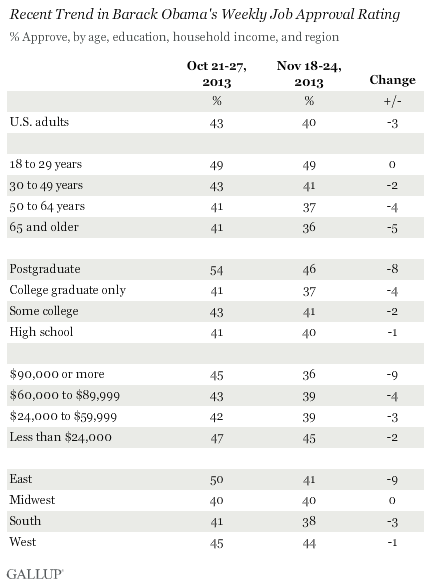 It is not just Obama's job approval rating that has taken a hit in recent months, but his image as a strong leader, as honest and trustworthy, and as an effective manager. Each of these has dropped by five to six points since September.

Gallup's latest weekly job approval average for Obama reflects several days when the three-day rolling average -- reported daily on Gallup.com -- hit a near-record-low 39%. It reached as high as 41% on other days last week, including the last three, from Nov. 22-24. Obama's lowest three-day average to date in his presidency is 38%, recorded several times in the summer and fall of 2011.

Obama's monthly job approval rating has declined by a single point each month since June, after a two-point decline between May and June. It fell to 43% in October -- with the October decline most likely reflecting the public's displeasure with Obama's role in the government shutdown as well as the botched healthcare website. Barring any major reversal this week, Obama is on track to shed at least two points in November, another month in which problems with the Affordable Care Act's implementation have dominated the news.

Results for this Gallup poll are based on telephone interviews conducted Nov. 18-24, 2013, with a random sample of 3,064 adults, aged 18 and older, living in all 50 U.S. states and the District of Columbia.