skip to main content
Wellbeing
One in Four U.S. Uninsured Plan to Remain That Way

PRINCETON, NJ -- Most Americans who currently lack insurance say they are likely to get it for next year, as required by the 2010 Affordable Care Act, also known as "Obamacare." But a substantial minority, currently 28%, say they are more likely to pay the government fine imposed for not having insurance. The percentage planning to pay the fine has changed little in the last month, even as the 2014 deadline for having insurance draws nearer. 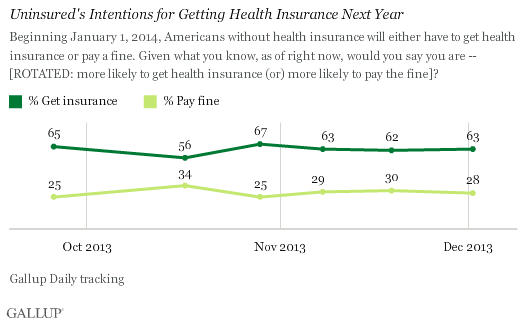 The latest results are based on Nov. 20-Dec. 2 Gallup Daily tracking of uninsured Americans' awareness of the healthcare law's requirements and their intentions of getting insurance.

Gallup estimates that 17% of U.S. adults currently do not have health insurance. With 28% of the uninsured group not planning to get insurance, assuming they follow through on those intentions, that would mean a minimum of 5% of all U.S. adults would be uninsured, leaving the U.S. short of its goal of universal coverage.

Politics Influence Decision to Get Insurance

Gallup has conducted nearly 4,000 interviews with uninsured Americans since it began tracking health insurance intentions in September. Looking at this full set of data allows one to get a sense of which subgroups of the uninsured population are more likely or less likely to say they will pay the fine rather than get insurance. An average of 28% since September say they plan to pay the fine. The figures for all major demographic groups are shown on page 2.

A key to making the law succeed is getting younger and, presumably, healthier Americans to sign up for insurance at a time in their lives when they are unlikely to need it. Importantly, the percentage planning to pay the fine is not skewed toward younger uninsured Americans -- 26% of the uninsured under age 30 say they are more likely to pay the fine, compared with 30% of those aged 30 and older.

The biggest differences appear by party identification -- 45% of uninsured Republicans plan to pay the fine, compared with 31% of independents and 15% of Democrats. 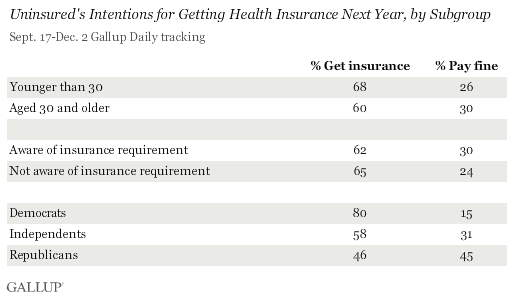 Given that Democrats widely endorse the healthcare law and Republicans widely oppose it, this relationship suggests uninsured Americans' personal opinions on the law may have as much to do with their decision to get insurance as their current health or income situation.

As such, for many uninsured Americans, particularly Republicans, the decision to pay the fine could be a form of protest against the law. It is unclear whether that protest will extend only as far as their response to this survey question, or will extend to their actual behavior when the deadline to get insurance arrives.

Little Change in Awareness of Insurance Requirement or Familiarity With Exchanges

The Nov. 20-Dec. 2 update finds a great deal of stability in uninsured Americans' awareness of the healthcare law's insurance requirement, their familiarity with the health insurance exchanges, and their likelihood of getting insurance through those exchanges since the last report in late November.

If the roughly one in four uninsured Americans follow through on their current intentions and choose to pay the government fine for not having insurance, the U.S. will fall short of the goal of universal coverage, although significant progress toward that goal will still have been made.

The biggest challenge to achieving universal coverage, however, may not be in making Americans aware of the requirement or in getting younger uninsured Americans to sign up. Rather, it may be getting those likely to oppose the law, namely Republicans, to overcome their ideological opposition to the law and sign up for insurance.

Results for this Gallup poll are based on telephone interviews conducted Nov. 20-Dec. 2, 2013, on the Gallup Daily tracking survey, with a random sample of 655 adults, aged 18 and older, living in all 50 U.S. states and the District of Columbia, who do not currently have health insurance.

For results based on the total sample of uninsured adults, the margin of sampling error is ±5 percentage points at the 95% confidence level.

For results based on the Sept. 17-Dec. 2 aggregate of 3,946 uninsured adults, the margin of sampling error is ±2 percentage points at the 95% confidence level.