WASHINGTON, D.C. -- Americans' confidence in the economy is still slowly recovering two months after the federal government shutdown ended. The Gallup Economic Confidence Index rose to -20 last week, a total improvement of 19 points since mid-October, and nearly back to the -15 measured in mid-September prior to the shutdown. 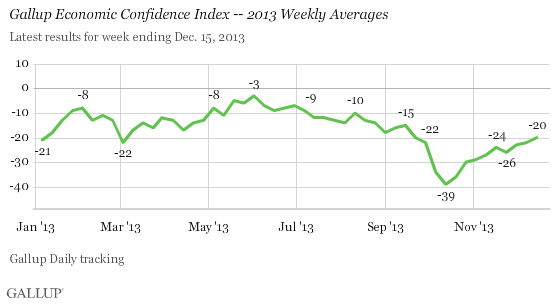 The index dropped a total of 24 points during the shutdown, but improved by 10 points within three weeks of the shutdown ending. It has risen at a much slower pace since then, up a total of nine points in the last six weeks.

Despite the shutdown-triggered plunge, confidence is averaging -16 for all of 2013 and will most likely surpass the -21 average for 2012. This would be the highest annual average since Gallup began tracking economic confidence daily in January 2008.

Gallup's Economic Confidence Index is based on two components: Americans' assessments of current economic conditions in the U.S. and their perceptions of whether the economy is getting better or worse.

Last week's net current conditions score improved slightly to -19 from -21 the prior week. The current score represents 19% of Americans who said the economy is "excellent" or "good," while 38% said it is "poor." Americans' assessments of the current economic situation have improved by 13 points since mid-October.

Americans' net economic outlook score was -21 last week, on par with -22 the prior week. The current score represents 37% who said the economy is getting better and 58% who said it is getting worse. Americans' outlook has improved by 25 points since mid-October.

Both components of the index nose-dived during the shutdown, but the outlook measure declined more. 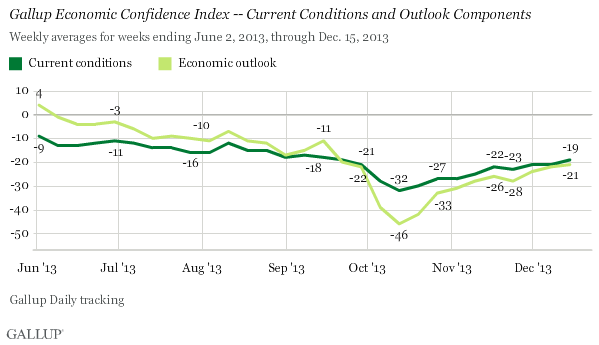 While economic confidence remains in negative territory, Americans' attitudes about the economy clearly have improved compared with prior years. Americans' confidence in the economy for 2013 is on track to be the highest in at least five years, despite drops after the fiscal cliff debate, the automatic budget sequestration cuts, and the government shutdown.

Congressional negotiators have reached a budget agreement that, pending expected Senate approval this week, could help bypass the partisan brinksmanship on budget issues that has negatively affected economic confidence since 2011. A bipartisan effort to reach a budget may even boost Americans' confidence in the economy by demonstrating that partisan fighting is not the "new normal." Still, real-world economic indicators, such as the unemployment rate and gross domestic product, must continue to improve to truly demonstrate that the effects of the recession are mostly behind the U.S. and better economic times have arrived.

Results for this Gallup poll are based on telephone interviews conducted Dec. 9-15, 2013, on the Gallup Daily tracking survey, with a random sample of 3,547 adults, aged 18 and older, living in all 50 U.S. states and the District of Columbia.