PRINCETON, NJ -- Americans are now more satisfied with many issues than they were 13 years ago, but they are significantly less satisfied with the economy and the role the U.S. plays in world affairs. The 40-percentage-point drop in Americans' satisfaction with the economy, along with a 21-point drop in the world affairs issue, contrasts with gains in satisfaction on issues such as the position of gays and lesbians in society, taxes, the nation's military strength, and race relations. 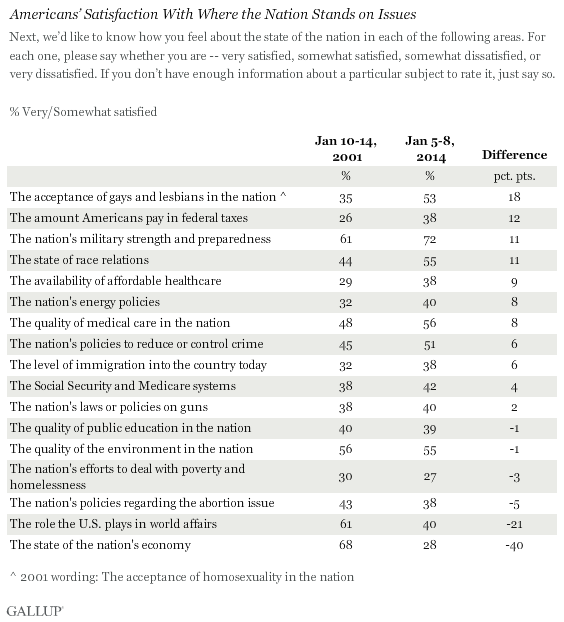 These data are from Gallup's annual Mood of the Nation survey, conducted Jan. 5-8. Gallup has measured satisfaction with these measures periodically since January 2001. The comparison to those baseline data 13 years ago provides an important measure of how the American public's views have and have not changed from that time, just as the dot-com boom was coming to a close and before the 9/11 terrorist attacks fundamentally altered many aspects of American life.

One of the most interesting findings from this 13-year comparison is that satisfaction has actually improved or stayed statistically the same on most issues measured over that period. As noted, Americans are statistically less satisfied today than in 2001 with only the economy and the role the U.S. plays in world affairs. Twenty-eight percent of Americans say they are satisfied with the state of the economy, compared with 68% in January 2001. And 40% of Americans currently say they are satisfied with where the nation stands on the role of the U.S., down from 61% in 2001. Clearly the aftermath of 9/11, including the ensuing wars in Afghanistan and Iraq and the more recent pullback from those engagements, may have affected these views -- particularly in comparison with early 2001, when the U.S. was unencumbered by any major involvement in foreign wars.

The largest increase in satisfaction since 2001 has come in terms of the acceptance of gays and lesbians, now at 53% satisfaction, vs. 35% 13 years ago. This shift mirrors the significantly increased acceptance of legalized same-sex marriage over the same time period.

In addition to the increase in Americans' satisfaction with taxes, the strength of the military, and race relations, the comparison to 2001 also shows an increase in satisfaction with two healthcare measures: the availability of affordable healthcare and the quality of medical care. The role of the highly visible Affordable Care Act in shifting these attitudes is not precisely clear.

Democrats and Republicans' Satisfaction Differs on Most Issues

Democrats express higher levels of satisfaction than Republicans on all but two of the 18 issues Gallup asked about this year, likely because a Democrat occupies the White House. Republicans are significantly more satisfied than Democrats on the quality of the environment and gun policy. These disparities reflect basic partisan differences on fundamental aspects of these issues. Republicans are less likely than Democrats to believe that global warming is a problem, for example, or to believe that stricter gun control laws are necessary.

Reflecting the highly contentious Affordable Care Act that has occupied so much partisan debate over the last several years, the survey shows that healthcare tops the list of issues on which Democrats and Republicans do not see eye to eye. Fifty-six percent of Democrats vs. 31% of Republicans say they are at least somewhat satisfied with the availability of affordable healthcare in the U.S. However, six in 10 from each party express satisfaction with the quality of medical care that is available.

Democrats and Republicans also express large differences in satisfaction when asked about the level of immigration into the U.S., with a majority of Democrats (53%) saying they are satisfied, compared with 29% of Republicans.

In addition to the quality of medical care, partisans express similar levels of satisfaction with the status of poverty and homelessness, the quality of public education, crime, and race relations in the nation. 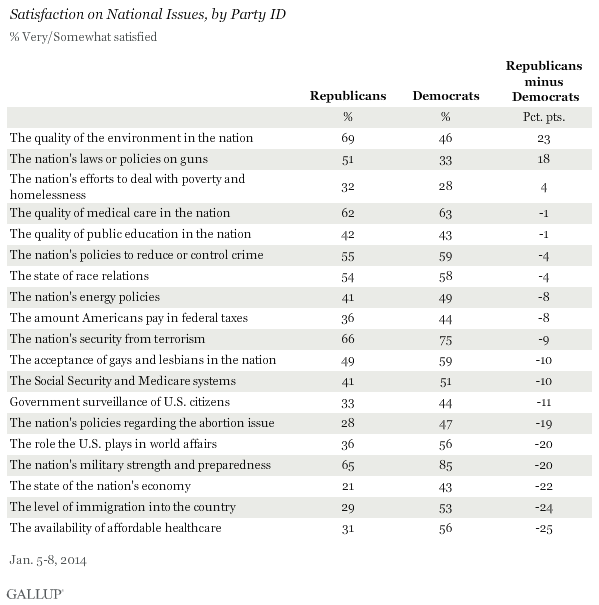 The U.S. has seen numerous changes since early 2001, but Americans' satisfaction with many aspects of the state of the nation over that time is quite similar. The biggest change in satisfaction has been with the state of the economy -- now much lower than it was then, at the end of the dot-com boom and before the major recession of 2008-2009. The impact of the 9/11 terrorist attacks and their aftermath are most likely associated with Americans' decreased satisfaction with the position of the U.S. in the world.

At the same time, perhaps in parallel with recent shifts in attitudes toward legalized same-sex marriage across the nation, Americans as a whole are now much more satisfied with the position of gays and lesbians than they were 13 years ago. Increased satisfaction with military strength reflects the positive position of the military in the nation's eyes, while increased satisfaction with taxes may reflect the lingering impact of the Bush tax cuts.

Americans are also more satisfied with healthcare and medical treatment now than in 2001. Although much of the 2010 Affordable Care Act's impact has yet to be felt, it's possible that this contentious piece of legislation has affected these attitudes.