Americans' support for the death penalty has varied over time, but apart from a single reading in 1966, the public has consistently favored it. Support ebbed from the 1960s to the mid-1970s, when the application of the death penalty was questioned and ultimately led to the Supreme Court's invalidating state death penalty laws. Subsequent to that, newly written laws passed constitutional muster and states began to use the death penalty again in the late 1970s, with support among Americans increasing to 70% or more in the mid-1980s to the late 1990s.

The broader trend over the last two decades has been diminished support for the death penalty, including a 60% reading last year, the lowest since 1972.

Over the last two decades, Democrats' support for the death penalty has dropped significantly, from 75% to 49%. Now, Democrats are divided on whether it should be administered to convicted murderers. Republicans' and independents' support is also lower now -- down nine and 18 percentage points, respectively -- though both groups still solidly favor the death penalty. Americans Tilt in Favor of Death Penalty Over Life Imprisonment The death penalty has always been controversial, and this year, the issue made headlines again amid a botched execution attempt in Oklahoma.

Democrats are mostly responsible for this shift in attitudes, and thus it is not surprising that most of the states that have abolished the death penalty in recent years are Democratic leaning. The death penalty is another example of how Democrats' and Republicans' opinions on political matters have become increasingly divergent compared with recent decades, including their views of the job the president is doing and on issues such as global warming and labor unions.

Results for this Gallup poll are based on 1,017 telephone interviews conducted Oct. 12-15, 2014 (for the favor/not in favor question), and 1,252 telephone interviews conducted Sept. 25-30, 2014 (for the death penalty vs. life imprisonment question). Each is based on a random sample of adults, aged 18 and older, living in all 50 U.S. states and the District of Columbia.

View of Death Penalty as Morally OK Unchanged in U.S.

Sixty-one percent of Americans say the death penalty is "morally acceptable," unchanged from last year but down from a high of 71% in 2006. Americans widely say lethal injection is the most humane method of execution. 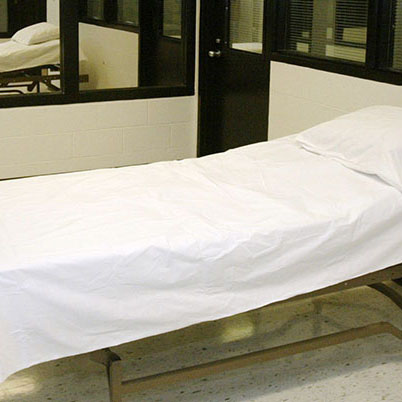 The Trend Line: Approval of Death Penalty Continues to Decline