WASHINGTON, D.C. -- Americans who favor the death penalty most often cite "an eye for an eye" as the reason they hold their position, with 35% mentioning it. "Save taxpayers money" and "they deserve it" tie as the second-most-popular reasons Americans volunteer in this open-ended measure, at 14% each. A solid majority of Americans (63%) still favor using the death penalty in murder convictions, generally consistent with the level of support found over the last decade.

This is the fourth time Gallup has probed Americans to state, in their own words, why they hold the position they do on the death penalty. The No. 2 response to this question has fluctuated over the years. Originally in 1991, the idea of the death penalty as a way to stop someone from repeating a crime was second at 19%. That concept has seemingly lost favor over the years, and this year, only 7% say deterrence is their top reason for supporting the death penalty. Instead, "save taxpayers money" and simply, "they deserve it," have emerged as the second-most-popular responses to why the death penalty should be used in murder convictions.

Several practical reasons including the belief that the prisoners "cannot be rehabilitated," that "life sentences don't always mean life in prison," and that the death penalty "relieves prison overcrowding" are mentioned less frequently, by between 2% and 3% of death penalty proponents.

While a majority of Americans tilt in favor of the death penalty, the one in three Americans who oppose it also have a diversity of views as to why the ultimate penalty should not be used. "Wrong to take a life" has been the top reason for opposing it since 1991, by comfortable margins. In two of the three times Gallup has asked this question, "persons may be wrongly convicted" has been the No. 2 justification Americans give for opposing the death penalty, along with reasons grounded in religious beliefs, including that "punishment should be left to God." Yet "wrong to take a life" is still the most popular open-ended response by a more than 2-to-1 margin.

Americans' top reasons for supporting the death penalty, including most prominently that it is necessary to take "an eye for an eye" when a murder is committed, demonstrate that Americans are less concerned with using the tool as a deterrent for future crimes and more so with using it as a means of punishment.

For those who oppose the death penalty, moral and religious reasons such as it is "wrong to take a life" are most popular. Considering the numerous accounts of death-row inmates being found innocent through the use of DNA evidence, it may be surprising that wrongful conviction is only tied for second as a reason cited by death penalty opponents. Practical reasons like the cost of keeping a prisoner on death row -- for decades, potentially -- does not factor as much into why Americans oppose the death penalty. Additionally, few opponents cite cruelty as a reason for their beliefs, despite recent news stories of botched executions in which lethal injections did not work as planned.

Throughout the 23 years Gallup has asked Americans why they hold their views on the death penalty, the responses have been generally consistent, with a few changes at the margins. For those studying the death penalty, these beliefs suggest many Americans have not only made up their minds about it, but they also have coalesced around defined reasons for holding those beliefs. 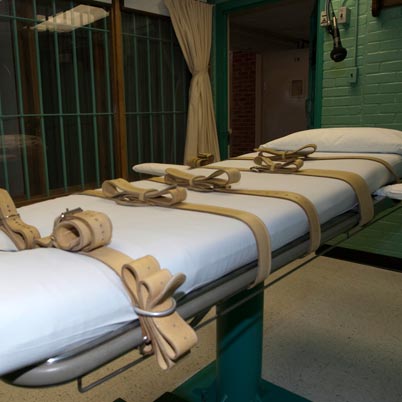 The Trend Line: Five Key Findings on the Death Penalty in America