WASHINGTON, D.C. -- While a majority of Americans feel safe enough to walk alone at night in their own neighborhoods, or anywhere within a mile of where they live, the feeling is far from universal. In the U.S., an average 36% over the past seven years have expressed fear about walking alone at night. Fear of walking alone rises to nearly 50% among women, city dwellers and the poor. These results are based on combined data from the six Gallup Crime polls conducted since 2009, including interviews with 7,141 U.S. adults. During this time, the percentage expressing a fear of walking alone near their homes at night has been steady, ranging from 34% to 38%. In the longer 50-year history of the trend, the percentage fearful of walking alone has ranged from a low of 30% in 2001, a month after the 9/11 terrorist attacks on New York City and Washington, D.C., to a high of 48% in 1982.

From a broad perspective, fear about walking alone at night is generally higher among groups that are the most likely to be crime victims, including low-income earners and urban dwellers. And among those who have been victims, 49% say they are afraid to walk alone, compared with 33% of nonvictims. Fears Not Always Related to Perceptions of Crime Rates The sense that a person can walk anywhere near his or her home alone at night without fear, one of the basic measures of how safe and secure Americans feel, has remained fairly stable in recent years. External factors that one might expect to significantly affect this measure -- such as a declining national crime rate and a plethora of highly publicized mass shootings -- have failed to push fear up or down. Even fluctuations in Americans' sense that crime is increasing or decreasing have not considerably changed their beliefs about whether their neighborhoods are safe at night.

Results for this Gallup poll are based on telephone interviews conducted in 2009, 2010, 2011, 2013 and 2014, and most recently Oct. 7-11, 2015. The aggregated sample for the six polls contains 7,141 adults, aged 18 and older, living in all 50 U.S. states and the District of Columbia. For results based on the subgroups mentioned, the margin of sampling error is ±5 percentage points at the 95% confidence level. All reported margins of sampling error include computed design effects for weighting. 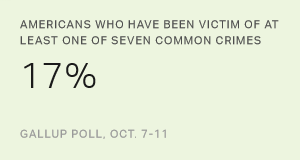 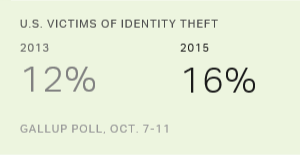 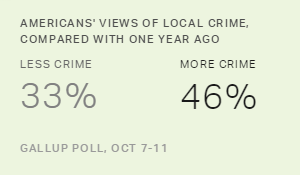