WASHINGTON, D.C. -- Americans' daily self-reports of spending averaged $92 in November. This is the same as the October average, and remains slightly higher than the other monthly averages to date in 2015. Each day, Gallup asks Americans how much they spent "yesterday" in restaurants, gas stations, stores or online -- not counting home, vehicle or other major purchases, or normal monthly bills -- to provide an indication of Americans' discretionary spending. The November 2015 average of $92 is based on interviews with more than 14,000 U.S. adults. In 2010, 2013 and 2014, spending increased from October to November, but it was stable or even decreased slightly in all other years. Last year, there was a large increase, $6, from October to November, but then a smaller one, $3, from November to December. Other than 2015, 2012 was the most recent year when spending was level between October and November. That same year saw a $10 jump between November and December, the largest jump Gallup has found between these two months.

Results for this Gallup poll are based on telephone interviews conducted Nov. 1-30, 2015, on the Gallup U.S. Daily survey, with a random sample of 14,212 adults, aged 18 and older, living in all 50 U.S. states and the District of Columbia. For results based on the total sample of national adults, the margin of sampling error is ±1 percentage point at the 95% confidence level. The margin of error for the spending mean is ±$4. All reported margins of sampling error include computed design effects for weighting. 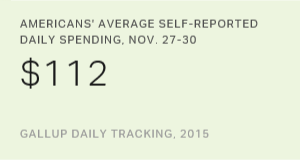 Little Movement for U.S. Consumer Spending in August, at $89