WASHINGTON, D.C. -- Forty-four percent of U.S. adults say they are financially "better off" than they were a year ago, while slightly more than one in three (35%) say they are "worse off." Another one in five (21%) say their financial situation is about the same. This year-over-year financial assessment is slightly less positive than what Americans reported in 2015, when 47% said they were better off and 28% worse off. But it is much rosier than the mostly negative assessments recorded between 2008 and early 2012. Since Gallup began polling on this question in the 1970s, Americans' financial assessments have fluctuated, usually along with the health of the U.S. economy. Over the years, only a handful of polls have found a majority of Americans saying they were "better off" than the previous year, including those during the dot-com boom from 1998 to 2000.

Americans were fairly negative at points in the early 1980s and in 1991-1992, when close to half said they were worse off. But they were most negative about their financial situations between 2008 and 2012 -- including majorities of 55% and 54% saying they were worse off in 2008 and 2009, as the Great Recession ended and Americans reeled from its effects. Americans' financial assessments have improved since then, and over the past two years, 47% and 44%, respectively, have said they are better off.

Though Americans are relatively buoyant in their views of their personal financial standing overall, several demographic groups are much less likely to say their standing has improved.

Americans younger than 35 remain the most positive group in their year-over-year financial assessments, with two in three saying they are better off. Meanwhile, a majority of employed Americans say they are better off (58%) this year than last -- twice as high as the positive reports from adults who are not employed (29%). And the more Americans earn, the more likely they are to say they are in better financial standing compared with the prior year.

Among political parties, a majority of Democrats say they are better off (55%) -- much higher than their independent (41%) and Republican (36%) counterparts.

Majorities of adults in most polls in Gallup's 40-year history on this question have said they expect to be financially "better off" a year from now. Currently, 63% say they will be in better financial shape in a year, while 17% say they will be "worse off." This figure is fairly typical of this measure in recent decades, although modestly lower than what Gallup found in the late 1990s and early 2000s. Though Americans' ratings of improvements in their personal financial situations are slightly less glowing than last year, their assessments are greatly improved from the dismal ratings they gave during the Great Recession and post-recession years. This coincides with their views of the U.S. economy, which are well above what they have been for most of the last decade, but not quite as positive as they were at this time last year.

Still, the 44% in the latest poll who say they are better off is higher than most readings in Gallup's trend, and reflects progress in certain measures of the U.S. economy such as the unemployment rate, which has declined in recent years. And as they have been for the past few decades, Americans are mostly optimistic about their financial future.

The historical data are available in Gallup Analytics. 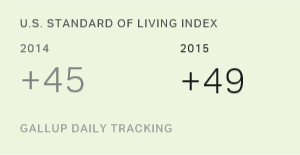