WASHINGTON, D.C. -- Americans' daily self-reports of spending fell to an average of $81 in January, down from $99 in December. This drop is typical of the post-holiday spending patterns Gallup has recorded over the past several years. This year's average January spending ties with January 2015 for the highest average for the month since January 2008. 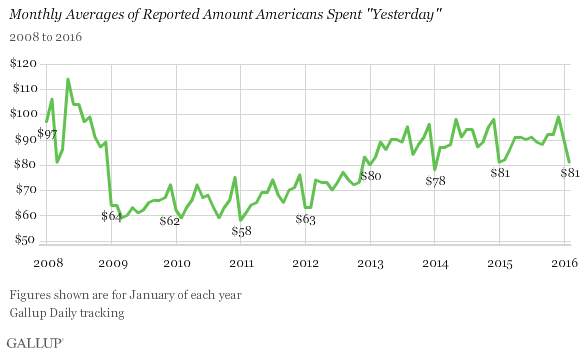 The January 2016 average is based on Gallup Daily tracking interviews with 15,216 U.S. adults. Gallup asks Americans to estimate the total amount they spent "yesterday" in restaurants, gas stations, stores or online -- not counting home and vehicle purchases or normal monthly bills -- to provide an indication of Americans' discretionary spending.

A lower spending average in January is the norm each year after the boom in spending during the holiday season. Not only is the magnitude of this year's decline in line with that of recent Januaries, but because the level of spending in December was among the highest for any month in Gallup's eight-year trend, the January 2016 spending average is still healthy compared with most of the past several January readings.

Gas prices have continued to drop, leaving extra cash in Americans' pockets over the year. And while the effect lower gas prices have on general consumer spending is unclear, the cheaper prices at the pump could lead many individuals to spend that money elsewhere. Recent years have seen a modest spending pickup in February, so an increase could be in store for this coming month as well. But that is no sure bet. The averages for the month of February have also been known to plateau, or even decrease.

Results for this Gallup poll are based on telephone interviews conducted Jan. 1-31, 2016, on the Gallup U.S. Daily survey, with a random sample of 15,216 adults, aged 18 and older, living in all 50 U.S. states and the District of Columbia. For results based on the total sample of national adults, the margin of error for the spending mean is ±$5 at the 95% confidence level. All reported margins of sampling error include computed design effects for weighting. 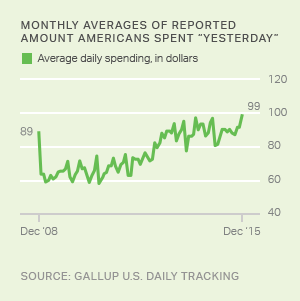 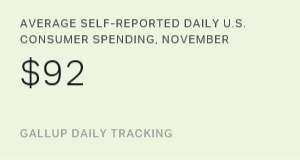