WASHINGTON, D.C. -- Iran's long-standing negative image in the U.S. remains unchanged, even as the deal designed to limit Iran's nuclear program has come into effect. Fourteen percent of Americans say they have a favorable view of Iran, essentially unchanged from a 2015 poll conducted before the nuclear deal was finalized but just a hair above the 11% average favorable rating the country has received over Gallup's 27-year trend. Iran was once a close U.S. ally, when the former was ruled by the autocratic Shah, but the 1979 Iranian Revolution birthed a "new" Iran, one ruled by a theocratic government and guided by staunchly anti-American convictions. The protracted U.S. hostage crisis that stemmed from the revolution undoubtedly sullied Iran's image in many Americans' minds. When Gallup began polling about Iran's favorable ratings in 1989, 5% said they saw the country favorably, a rating that would only modestly improve in the ensuing years. Iran's highest favorable rating of 17% was recorded in 2004, when the U.S. occupied Iraq, the two countries' common enemy.

These results are based on a Gallup poll conducted Feb. 3-7. Iran also retains its position as one of the least popular countries and territories of the 21 that Gallup measures on an annual basis. Only Syria and North Korea have lower favorable ratings this year, at 12% and 8%, respectively.

Republicans Most Negative Toward Iran

One clear reason that the Iran nuclear deal has done nothing to bolster Iran's image in the U.S. is that most Americans don't approve of the agreement. Nearly twice as many Americans disapprove of the deal as approve, 57% versus 30%. Fourteen percent have no opinion. Approval of the Iran nuclear deal varies significantly by party. Just 9% of Republicans approve of the deal negotiated by the Obama administration, compared with 30% of independents and 51% of Democrats.

Americans nonetheless implicitly agree with the Obama administration's overarching aim in negotiating this deal, namely, stopping Iran from producing nuclear weapons. But the reaching of and the implementation of the agreement appear to have done little to assuage Americans' concerns about Iranian nuclear weapons. Three-quarters of U.S. adults say the potential development of nuclear weapons by Iran represents a critical threat to the vital interests of the U.S. in the next 10 years. This is nearly equivalent to the 77% who answered similarly last year, prior to the finalization of the deal in July 2015. Only when it comes to international terrorism do more Americans see this as a critical threat than Iran's possible production of nuclear weapons, across 12 existing or emerging threats Gallup tested. Last month was a historic one for Iran -- the International Atomic Energy Agency officially verified that Iran has taken significant steps to curtail its nuclear program. With this verdict, Iran is freed from the devastating effects of international economic sanctions. Iran is already re-engaging the global economy; the country shipped its first oil to Europe in the post-sanctions era several days ago. Additionally, the U.S. waived some sanctions against Iran, allowing the latter to rejoin the international financial system.

But these milestones notwithstanding, Gallup's data suggest that American perceptions' of Iran have not changed. Iran retains its spot as one of the least popular countries in the eyes of U.S. adults. Congressional Republicans' fierce opposition to the nuclear deal, as well as Israeli Prime Minister Benjamin Netanyahu's disapproval, may have helped shape the sour national mood on this issue. But whatever the cause of Americans' skepticism, it may take years of demonstrated Iranian compliance with the terms of the deal before most U.S. adults come around to the agreement, if they ever do. 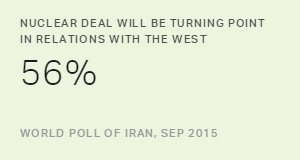