PRINCETON, N.J. -- Of the nation's 50 largest metro areas, Orlando, Florida, had the highest rate of net job creation in 2015, according to employees' reports of hiring activity where they work. Rounding out the top five are Salt Lake City, Utah; Austin, Texas; Louisville, Kentucky; and San Francisco, California. Orlando has recently experienced strong hiring growth in the hospitality and leisure sector -- the greatest source of jobs in the area, which is known for its theme parks. San Francisco has long been a major technology hub, and Austin and Salt Lake City have made gains in technology jobs in recent years as well. Technology and healthcare are two of the major drivers of job growth in the Louisville area.

These results are based on Gallup Daily tracking interviewing in 2015. Gallup asks full- and part-time employed Americans each night whether their place of employment is hiring workers and expanding the size of its workforce, letting workers go and reducing the size of its workforce, or not changing. The Job Creation Index is the percentage of workers who say their employer is hiring minus the percentage who say their employer is letting workers go.

Nationally in 2015, 42% of U.S. workers reported an increase in jobs where they worked and 12% reported a decrease, for a Job Creation Index score of +30.

Last year, Gallup interviewed at least 730 working adults in each of the 50 largest U.S. metro areas, with more than 1,000 interviews conducted in 39 of the 50. Gallup weights each metro area sample so that it is representative of the population residing there on key demographic characteristics.

The metro areas with the five strongest job markets in 2015 ranked well above the national average, all with scores of at least +40. Those five metro areas also ranked highly on the 2014 list, with Austin and Salt Lake City edging out the others for the top spot.

Although most of the major U.S. metro areas have above-average job creation compared with the nation as a whole -- highlighting the economic vitality of cities relative to suburbs and rural areas in this country -- several are performing below the national average. Most notably, Hartford, Connecticut, and Providence, Rhode Island, rank last among the top metro areas. Both areas have seen well-paying manufacturing jobs leave their state and have struggled to regain them or replace them with similar types of employment. As the U.S. job market has improved in recent years, almost all large metro areas -- including those that trail others in worker reports of hiring activity -- have seen gains in the Job Creation Index. All but eight of the 50 largest metro areas had higher Job Creation Index scores in 2015 than in 2014. Las Vegas showed the greatest improvement, surging from +21 to +35.

Looking further back, all metro areas except for Oklahoma City have seen significant increases in Job Creation Index scores since 2011. Providence, which has consistently ranked among the bottom five metro areas in most years, has seen its score improve from +5 in 2011 to +22 today. Hartford has seen less improvement, moving from +15 to +21.

While Oklahoma City residents still report more job expansion than reduction, the area has shown no increase in job creation since 2011 -- likely a result of changes in energy production brought about by declining oil prices. In 2011, Oklahoma City ranked first in job creation. Houston, another market with a large energy-sector jobs base, ranked first in the 2012-2013 report but saw its Job Creation Index score decline in the past year.

Big cities, and the areas that surround them, are often the center of job growth in any country, including the United States. American workers in the largest metro areas tend to see hiring activity that exceeds what is going on in the country more generally. Nowhere is that more apparent than in places such as Orlando, Austin, Salt Lake City and San Francisco. Advances in technology are fueling a boost in jobs in many of these metro areas. Orlando and Las Vegas, which rely heavily on tourism to support their economies, are among the stronger U.S. job markets, perhaps reflecting higher consumer confidence and consumer spending compared with the immediate post-recession years.

To underscore the increasingly brighter reports of job creation in recent years in the major metro areas, Oklahoma City's +25 Job Creation Index score in 2011 ranked first, while the same score in 2015 puts it in the bottom five.

Results for this Gallup poll are based on telephone interviews conducted Jan. 2-Dec. 30, 2015, on the Gallup U.S. Daily survey, with a random sample of 203,484 employed adults, aged 18 and older, living in all 50 U.S. states and the District of Columbia. For results based on the total sample of working adults, the margin of sampling error is ±1 percentage point at the 95% confidence level.

For results based on metro area-level data, the margin of sampling error is ±4 percentage points at the 95% confidence level, and is ±3 percentage points for most metro areas. Respondents are assigned to metro areas using U.S. Office of Management and Budget definitions of metropolitan statistical areas. 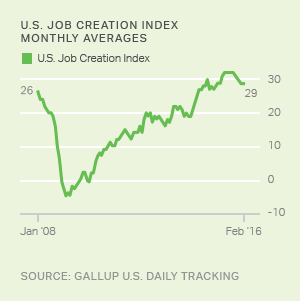 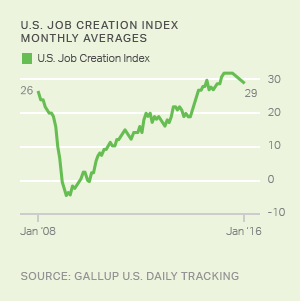