WASHINGTON, D.C. -- Americans' daily self-reports of spending increased to an average of $89 in March, up from $84 in February. The latest monthly average matches the highest spending for the month of March that Gallup has found in its nine-year trend of measuring U.S. discretionary spending. March daily spending was only slightly lower in 2014 and 2015, when it averaged $87 and $86, respectively. Since 2008, averages for March have generally bested averages for January and February, and have usually increased again at some point in the spring -- with the exception of 2012 and 2013.

The March 2016 average is based on interviews with more than 15,000 U.S. adults. Since January 2008, Gallup has asked Americans daily how much they spent "yesterday" in restaurants, gas stations, stores or online -- not counting home, vehicle or other major purchases, or normal monthly bills -- to provide an indication of Americans' discretionary spending.

Spending tended to be higher during much of 2008, in the early part of the Great Recession and before the financial crisis fully hit later that year. Yearly averages illustrate how spending bottomed out in 2009 before it gradually improved from 2010 to 2013 and has been fairly consistent since then -- although it has varied significantly by month across any given year.

For each of the past six years, the spending average for March has been a rough bellwether for that year's spending, coming within $3 of the annual average. The months of April, June and October have come within this same range of the yearly averages since 2010. This did not hold true in March 2008 and March 2009, however -- years in which the recession and the financial crisis dealt their immediate blows.

The increase in Americans' spending in March, compared with their spending in the colder months of January and February, is not unusual. Most years since 2008 have seen February-to-March spending increases -- ranging from $11 in 2012 to $3 in 2011. And while the latest monthly average matches the record high for the month, it is fairly consistent with the $86 to $89 range for recent March average spending.

The latest average is significantly higher than the averages for March recorded from 2009 to 2012, as the economy struggled to emerge from the havoc of the financial crisis. And it represents a strong starting point for the spring and summer months when spending typically increases even further.

Data are available in Gallup Analytics.

Results for this Gallup poll are based on telephone interviews conducted March 1-31, 2016, on the Gallup U.S. Daily survey, with a random sample of 15,253 adults, aged 18 and older, living in all 50 U.S. states and the District of Columbia. For results based on the total sample of national adults, the margin of error for the spending mean is ±$5 at the 95% confidence level. All reported margins of sampling error include computed design effects for weighting. 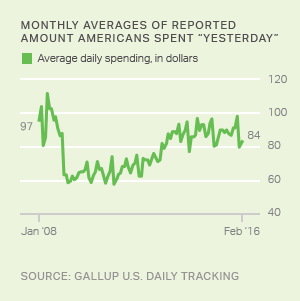 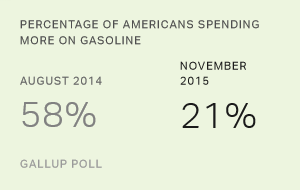 Americans Say Their Spending on Gasoline Moving Back Down