WASHINGTON, D.C. -- Fewer Americans reported not having enough money in the past 12 months to pay for necessary healthcare and/or medicines for themselves or their families than at any point since Gallup and Healthways began tracking this metric in 2008. From 2008 through 2013, the percentage of Americans who experienced difficulty in the past 12 months affording healthcare and medicine was fairly steady, hovering near the average of 18.7%. Since then, the average has been 16.4%, including the new quarterly low of 15.5% in the most recent quarter. These findings are based on interviews conducted daily from January 2008 through March 2016 as part of the Gallup-Healthways Well-Being Index. Gallup and Healthways classify Americans as healthcare insecure if they report being unable to pay for healthcare and/or medicines they or their family needed at some point in the past 12 months.

Overall, the percentage of U.S. adults with healthcare insecurity has dropped 3.5 percentage points since the fourth quarter of 2013. This drop in healthcare insecurity coincides with the decline in the percentage of uninsured Americans, which has fallen from 17.1% in the fourth quarter of 2013 -- just before the Affordable Care Act's requirement that Americans have health insurance went into effect -- to 11.0% in the first quarter of this year.

Still, the drop in the uninsured rate does not account for the entire reduction in the percentage of Americans experiencing healthcare insecurity.

Since late 2013, the percentages of both uninsured and insured Americans who report struggling to afford healthcare has declined. The decline has been larger among the uninsured population (from 45.0% to 41.8%), but the smaller decline among the much larger group of Americans with health insurance (from 13.6% to 12.3%) also contributes to the overall drop in healthcare insecurity. Both insured and uninsured Americans' greater ability to afford healthcare and medicine could also reflect an improving economy -- most notably unemployment and underemployment rates that have returned to pre-recession levels.

But it could be that Americans are less burdened in other areas, such as energy costs from the decline in gas prices, which leaves more money for healthcare and other expenses. Also, the percentage of Americans struggling to afford food for themselves or their families is at a record low.

More generally, half of all Americans recently reported that their personal financial situation was either "excellent" or "good," the highest figure Gallup has recorded since 2008.

Although roughly one in six Americans report having times in the past year when they were unable to afford the healthcare or medicine they needed, this is down significantly from just three years ago. The expansion of health insurance coverage to millions more Americans under the Affordable Care Act is likely a major factor in the decline of healthcare insecurity, demonstrating a concrete benefit of the law.

At the same time, there are growing concerns that health insurance costs are set to rise in many parts of the country, as insurers and states adjust to the new healthcare market. These increases would mostly affect Americans who do not qualify for a health insurance subsidy under the Affordable Care Act.

Also, the fate of the law itself remains uncertain. It has survived two Supreme Court challenges to date, but the presumptive Republican presidential nominee Donald Trump has vowed to make repeal of the law a priority if he is elected. If the Affordable Care Act is repealed under a new administration, 24 million Americans could become newly uninsured by 2021, according to a recent Urban Institute report.

Repealing the Affordable Care Act could easily halt or reverse the positive trends in healthcare access, which would certainly affect Americans' ability to pay for healthcare in the future.

Diana Liu contributed to this article

Results are based on telephone interviews conducted Jan. 1-March 31, 2016, as part of the Gallup-Healthways Well-Being Index survey, with a random sample of 44,558 adults, aged 18 and older, living in all 50 U.S. states and the District of Columbia. For results based on the total sample of national adults, the margin of sampling error is ±0.6 percentage points at the 95% confidence level. 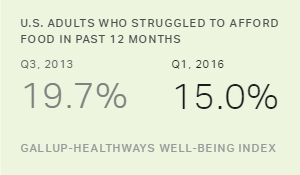 In U.S., Percentage Struggling to Afford Food at New Low 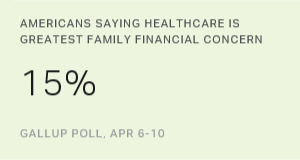 Overall, Americans cite healthcare costs as their family's most pressing financial problem. However, those without enough money to live comfortably are more likely to mention concerns about the immediate costs of living.