WASHINGTON, D.C. -- U.S. workers' reports of hiring activity at their place of employment in June held at the record high first achieved in May. The +33 Job Creation Index score for June represents 44% of employees saying their employer is hiring workers and expanding the size of its workforce minus the 11% saying their employer is letting workers go. Gallup has asked workers to report on hiring activity at their places of employment since 2008. The index was negative between December 2008 and August 2009 amid the Great Recession -- meaning more U.S. workers reported a loss of jobs rather than hiring at their places of employment -- but steadily improved since then. For much of 2015, the Job Creation Index stayed at a then-record +32 before falling back in the late fall and winter months to scores of +29 and +30. But workers' reports brightened in the spring, with the index reaching a new high +33 in May.

The latest Job Creation Index is based on interviews with 17,930 U.S. adults who are employed full or part time, conducted throughout the month of June. In addition to the 44% of workers reporting a net hiring increase and the 11% reporting a net hiring decrease, 39% of employees say the size of their workforce is unchanged. Of the four major U.S. regions, the Midwest has the highest job creation index (+37), followed by the West (+34), with the East and South (both +31) slightly further behind. The Midwest had led the other regions most of last summer before falling behind the West in the winter months. As the weather warms again, the Midwest has re-emerged as the strongest region for hiring.

The Midwest's +37 index score is notable as the highest Gallup has measured for any region in its eight-year trend, but it is not significantly better than the region's scores of +36 on two occasions last summer. Workers' perceptions of employers' hiring remain stronger than at any point in the last eight years. These perceptions of job creation can produce different results from other indicators of job growth the government measures in part because Gallup's measure gets at workers' general views of hiring and firing at the company level but does not quantify the extent of that activity or the types of jobs involved. However, the fact that only 11% of workers say that their employer is letting workers go, while four times that many say their company is hiring, suggests a relatively positive jobs situation at this juncture.

Results for this Gallup poll are based on telephone interviews conducted June 1-30, 2016, on the Gallup U.S. Daily survey, with a random sample of 17,930 adults, aged 18 and older, living in all 50 U.S. states and the District of Columbia who are employed full- or part-time. For results based on the total sample of working adults, the margin of sampling error is ±1 percentage points at the 95% confidence level. All reported margins of sampling error include computed design effects for weighting. 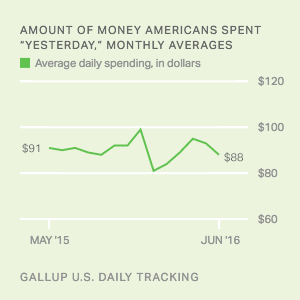 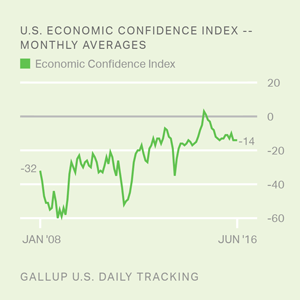