Obama's 30th quarter marks just the sixth time during his presidency that his quarterly average approval has been above the majority level. This includes his first four quarters in office, during the traditional honeymoon phase for presidents, as well as the last quarter during his first term, which coincided with his re-election and a subsequent boost in popularity.

By comparison, other recent two-term presidents had many more quarterly averages above 50% through their 30th quarter in office, including George W. Bush with 16, Bill Clinton with 21 and Ronald Reagan with 18.

Obama's approval ratings held above 50% for much of the latest quarter, including averaging 53% in mid-June. But over the last two weeks, his ratings have suffered as the nation has dealt with more fatal shootings of black men by police officers and two incidents of sniper attacks on police officers. In Gallup's most recent weekly average of presidential approval, based on July 11-17 polling, 49% of Americans approved of Obama's overall job performance.

Notwithstanding the recent slippage, Obama's approval rating has improved among all party groups since last fall, including one- to two-percentage-point increases among Democrats, independents and Republicans in the most recent quarter. Democrats' approval is now at 87.7%, up from 82.8% last fall. Independents' ratings are up by a similar amount, to 48.4%. Republicans' ratings of Obama remain low, but now exceed 10%.

The improvement in Obama's job ratings since last fall is similar to the pattern seen in Ronald Reagan's ratings in 1987 and 1988. In the late summer and early fall of 1987, an average of 47.0% of Americans approved of the job Reagan was doing as president. As the calendar turned to 1988, that improved to 50.0% and generally stayed there into the summer. But during the late summer and early fall months, a time that included the 1988 party conventions and election campaign, Reagan's approval rating averaged 53.5%.

Improvement over the course of a president's final year in office has not been the norm historically for two-term presidents.

Overall, then, Obama is less popular than Clinton and Eisenhower were at this point in their presidencies, but like Reagan, Obama's ratings are improving at a time that could prove beneficial to his party in the looming presidential election.

Americans are now seeing Obama in a much better light than they did roughly a year ago. Democrats hope they can pull off the rare feat of a party winning three consecutive presidential elections. The improvement in Obama's job approval ratings harkens back to what occurred for Reagan in 1988, the last time a party won a third consecutive presidential election, with Reagan's vice president, George H.W. Bush, defeating Democrat Michael Dukakis.

While that historical pattern may offer hope for Democrats, recent events may serve to halt the improvement in Obama's ratings. The president's most recent approval ratings have primarily been below 50% as the nation struggles with high-profile violence between police and black citizens. Growing concern over race relations and violence is the likely reason Americans' satisfaction with the way things are going in the U.S. fell sharply in July.

Like the GOP in 1988, Democrats have a significant opportunity at their party convention next week to convince Americans that the president has done a good job and that their party should continue to hold the White House beyond his term. Whether Americans ultimately buy that argument may depend on whether their views of the state of the nation improve between now and Election Day.

Results for this Gallup poll are based on telephone interviews conducted April 20-July 19, 2016, on the Gallup U.S. Daily survey, with a random sample of 45,229 adults, aged 18 and older, living in all 50 U.S. states and the District of Columbia. For results based on the total sample of national adults, the margin of sampling error is ±1 percentage point at the 95% confidence level. All reported margins of sampling error include computed design effects for weighting. 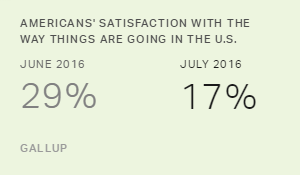 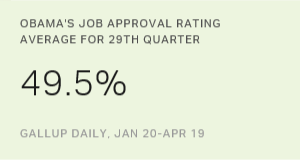 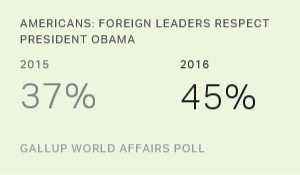 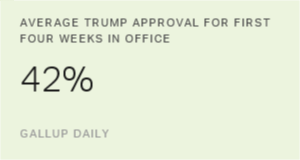