These data are based on a Gallup poll conducted June 14-23, before national and state leaders took steps this month to address the growing issue of prescription painkiller and heroin abuse. In a rare display of bipartisanship, Congress passed and President Barack Obama signed the Comprehensive Addiction and Recovery Act (CARA), which contains numerous prevention and treatment measures intended to reduce prescription opioid and heroin abuse.

Additionally, 46 state and U.S. territorial governors signed a pact through the National Governors Association committing themselves to reduce inappropriate prescribing of prescription painkillers, educate the public about opioid abuse and improve access to treatment.

Across key U.S. subgroups, there are notable differences in perceptions of opioids as a crisis or very serious problem:

Presidential candidates from both parties have focused on opioid addiction on the campaign trail, particularly ahead of the Republican presidential debate in New Hampshire, a state ravaged by opioid overdose deaths. Eight in 10 Americans say they have heard or read about problems with prescription opioids, including 46% who have heard or read a lot, 19% some, and 15% only a little.

Americans who have heard or read about the prescription opioid problem do not rate any of four possible causes of prescription opioid addiction higher than any others, suggesting the public believes the problem needs to be attacked on multiple fronts. Slightly more than half place "a lot" of blame on "the pharmaceutical industry encouraging doctors to use opioids" and on "doctors overprescribing painkillers to their patients." Meanwhile, slightly less than half attribute a lot of the blame to a "lack of public knowledge about the dangers of opioids" and to "patients demanding that they be given a prescription to ease their pain."

Among those who have heard or read about the prescription opioid problem, Republicans are less likely than Democrats to blame pharmaceutical companies and lack of public knowledge about opioids for addiction problems. Republicans are more likely than Democrats to blame patients demanding that they be given prescription painkillers. Both are just as likely to blame doctors for overprescribing painkillers.

More Americans see prescription painkillers and heroin as a crisis or very serious problem in their area than do so for any of the other four items Gallup asked about. Americans are also significantly more worried about drugs as a problem facing the country more broadly now than in recent years. In March, Gallup found 44% of Americans worry about drug use "a great deal," up 10 percentage points from two years ago.

The new federal opioid law and the pact that nearly all state governors signed address some of the factors Americans say are to blame for the opioid problem. The federal law encourages states to establish programs to monitor drug prescriptions, and the pact includes measures to reduce inappropriate prescribing of painkillers. Both feature public education components to increase awareness of the dangers of opioids. The federal law also establishes a task force for studying how to better address pain and offers incentives for pharmaceutical companies to develop non-opioid painkillers. However, Obama and congressional Democrats argue that the law does not provide enough funding to prevent and treat opioid abuse and addiction.

The outcome of the presidential election also could shape how opioid addiction will be addressed in the coming years. Hillary Clinton released a $10 billion plan last year that expands access to treatment programs. Donald Trump has said building a wall on the border between the U.S. and Mexico will keep drugs out of the country but hasn't offered other specifics on how to prevent or treat abuse and addiction.

Results for this Gallup poll are based on telephone interviews conducted June 14-23, 2016, with a random sample of 1,025 adults, aged 18 and older, living in all 50 U.S. states and the District of Columbia. For results based on the total sample of national adults, the margin of sampling error is ±4 percentage points at the 95% confidence level. 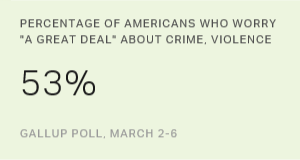 In U.S., Concern About Crime Climbs to 15-Year High

Americans' level of concern about crime and violence has soared since 2014 and is now at its highest point since 2001. Concern about drug use also has risen sharply over the past two years.