WASHINGTON, D.C. -- Americans' approval of the U.S. Congress remains low at 18%, though the rating has recovered after dropping to 13% in July. The rating in August ties with the highest measured in 2016 so far. Approval of the institution has been below 20% in most of Gallup's monthly measures since February 2010. Approval ratings of Congress were in the 30% range in 2009 during the honeymoon period for President Barack Obama and a newly installed Democratic majority. However, by early 2010, approval faltered and has since averaged 16%.

This month's improvement in Americans' approval of Congress, recorded in an Aug. 3-7 Gallup poll, coincides with a 10-percentage-point increase in the percentage of adults who say they are satisfied with the direction of the U.S. Both measures had taken a hit in July before they rebounded this month. Over more than 15 years, Americans' approval of Congress has largely paralleled their satisfaction with the way things are going in the U.S. at large. In most polls between 2001 and 2012, the two measures have come within 10 points of each other. On only a few occasions -- after the attacks on 9/11, prior to the March 2003 invasion of Iraq and in the first couple of months of Obama's presidency -- did Congress' approval rating surpass that of satisfaction with the U.S. by more than 10 points.

Early in 2012, Americans' satisfaction with the direction of the U.S. improved while their approval of Congress did not. Since then, the two metrics have continued to run in parallel, but satisfaction has consistently outpaced Congress' job approval by as much as 17 percentage points. This more negative attitude toward Congress mirrors other indicators showing that Americans are at or near record lows in their confidence in the executive and judicial branches, and the federal government in general.

Despite controlling both chambers of Congress, Republicans remain least approving of the institution, at 13%, while about one in five independents (20%) and Democrats (19%) approve of the job Congress is doing.

The increase in Congress' job approval this month is a modestly positive sign for the institution, but 18% is still historically low. In addition to being the least trusted branch of government, the legislative branch's approval rating has not seen any lasting improvements in recent years.

The improvement is likely related to the cheerier views Americans hold about the direction of the country more generally, although neither measure is doing well by historical standards.

​Learn more about how the Gallup Poll Social Series works. 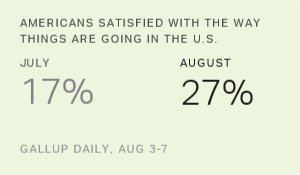 Americans' satisfaction with the way things are going in the U.S. is nearly back to where it was in June after a sharp drop in July. The rebound is chiefly attributable to declining concern about race relations and racism.

Americans who rate the job Congress is doing as poor or bad say Congress is ineffective and gridlocked, and strongly agree that Congress is under the control of financial contributors and lobbyists rather than constituents back home.