This is the first article in a five-part series examining changes in Americans' health and well-being during Barack Obama's presidency.

WASHINGTON, D.C. -- During his presidential campaign and first term in office, President Barack Obama made healthcare reform the foundation of his domestic agenda. Now, six years after the Affordable Care Act was signed into law and a few months before Obama leaves office, Gallup and Healthways are reviewing how his signature legislative achievement has affected the public's perceptions of the law's primary goals. These goals include: increasing healthcare accessibility, reducing healthcare costs and improving healthcare quality.

To make healthcare more accessible, the Affordable Care Act requires Americans to carry health insurance or risk paying a fine -- a provision often referred to as the "individual mandate." The percentage of U.S. adults without health insurance has dropped significantly since the individual mandate took effect in early 2014, according to data from the Gallup-Healthways Well-Being Index. The uninsured rate declined from 17.3% in 2013 to 10.8% so far in 2016, the lowest percentage of uninsured adults Gallup and Healthways have recorded in more than eight years of tracking. This translates to roughly 16.1 million previously uninsured adults gaining health insurance since 2013. Minorities, young adults and lower-income Americans have seen the sharpest drops in their uninsured rates. Regardless, these groups still have the highest uninsured rates across key demographic groups. Further, Gallup-Healthways research shows that collectively, states that have expanded Medicaid to provide coverage to more individuals and have established a state-run marketplace exchange have seen a greater decline in their uninsured rate than have states that took neither or just one of these actions.

The percentage of U.S. adults who say they were unable to afford healthcare or medicines for themselves or their families at some point in the past 12 months is also at a record low after nearly eight years of Obama's presidency. Since Gallup and Healthways began tracking this metric in 2008, it has dropped more than four percentage points, with a majority of that decline occurring after the individual mandate took effect in early 2014. The increase in the percentage of U.S. adults with health insurance appears to be a key reason why fewer U.S. adults report having difficulty affording healthcare or medicines. Even though fewer Americans are struggling to afford healthcare, other Gallup trends suggest that the Affordable Care Act may not be meeting its goal of reducing healthcare costs. U.S. adult satisfaction with the total cost they pay for their healthcare has remained relatively steady over the past 14 years, including after the healthcare law was passed. Gallup also previously reported that since the individual mandate took effect, there has been a rise in the percentage of U.S. adults paying for all or some of their health insurance premiums who say that their premiums have gone up "a lot" over the past year.

To improve healthcare quality and lower long-term costs, the Affordable Care Act includes various provisions to encourage preventive and primary care. The percentage of U.S. adults with a personal doctor has remained relatively unchanged since early 2014, according to data from the Gallup-Healthways Well-Being Index. Other Gallup trends suggest healthcare quality remains a concern. Gallup reported in late 2015 that the percentage of U.S. adults rating the quality of their healthcare and their healthcare coverage as "excellent" has dropped over the previous two years.

Still, even with the cost, quality and future of healthcare in question, it is clear that millions of U.S. adults have gained access to healthcare through the Affordable Care Act.

Results are based on telephone interviews conducted January 2008-July 2016 as part of the Gallup-Healthways Well-Being Index survey, with a random sample of 2,415,499 adults, aged 18 and older, living in all 50 U.S. states and the District of Columbia. For results based on the total sample of national adults, the margin of sampling error is ±.08 percentage points at the 95% confidence level. All reported margins of sampling error include computed design effects for weighting. 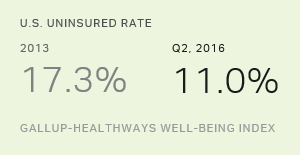 Tracking the Progress of the Affordable Care Act

In his recent article in the Journal of the American Medical Association, President Obama relied on data from the Gallup-Healthways Well-Being Index to assess changes and identify patterns in states' uninsured rates. 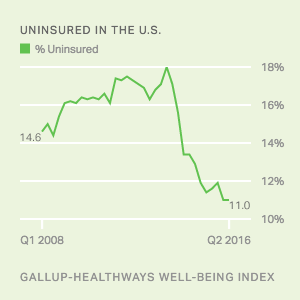