WASHINGTON, D.C. -- The image of the U.S. real estate industry improved for the fifth year in a row in 2016, with 44% of Americans now viewing it positively and 21% viewing it negatively. The public's 23-percentage-point net positive rating gives real estate, for the first time since 2006, a higher rating than the overall average for the 25 industries Gallup measures annually. The industry's climb back into public favor began in 2009 following a spectacular five-year fall after the housing bubble burst in the middle of the last decade. During that five-year span, the public's net positive rating of real estate tumbled from +35 in 2003 to -40 in 2008. The 75-point ratings loss was the largest any industry has suffered since Gallup began asking the question in 2001. Three other industries sustained smaller, but still sizable, losses in their ratings from their high points in the early to mid-2000s. All three have since regained at least some of the ground they lost.

Even with its highest rating of +35 in 2003, the real estate industry's image has never approached the net positive ratings of such American favorites as the restaurant and computer industries. On the other hand, the public's -40 net positive real estate rating -- coming during the 2008 mortgage crisis that resulted in millions of defaulted home loans -- pushed real estate near the bottom of the 25 rated industries. Only the federal government (-42) and the oil and gas industry (-61) were viewed more negatively at the time.

This year, real estate's +23 net positive puts it near the middle of the ratings, closest to the retail (+26) and automobile (+27) industries.

No industry's reputation suffered more than the real estate sector's during the financial calamities that began with the collapse of the housing bubble in 2006 and 2007. Year by year, however, this industry has managed to turn around the negative views of many Americans as housing prices have climbed past pre-crash levels. The public now holds an overall view of the sector that is the most positive since 2005. The industry's image improved in 2016 even as the overall ratings for the 25 industries tracked by Gallup slipped slightly. Combined with the public's renewed belief that real estate is the best long-term investment, the higher ratings give cause for optimism in an industry that has seen more than its share of ups and downs since the turn of the new century.

Results for this Gallup poll are based on telephone interviews conducted Aug. 3-7, 2016, with a random sample of 1,032 adults, aged 18 and older, living in all 50 U.S. states and the District of Columbia. Each industry was rated by a randomly chosen half sample of respondents. Results for each industry have a margin of sampling error of ±6 percentage points at the 95% confidence level. All reported margins of sampling error include computed design effects for weighting. 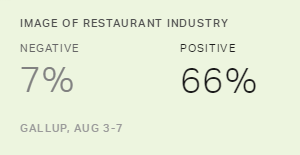