WASHINGTON, D.C. -- Optimism among U.S. investors in the third quarter of 2016 rose to heights not seen in more than nine years. The Wells Fargo/Gallup Investor and Retirement Optimism Index climbed to +79, an increase of 17 points from the second quarter that built on an already impressive 22-point gain from the previous quarter. Optimism among U.S. retired investors grew considerably more than optimism among nonretired investors. Significant gains in retirees' outlook for both their personal finances and the national economy pushed their overall index from +45 in the second quarter to +81 in the third. Nonretirees, whose index score had already jumped by 27 points in the second quarter, gained another 10 points to reach +78 in the third.

The seven items that make up the index include three on personal finances (meeting long-term and short-term investment goals and maintaining income) and four on the economy (economic growth, the stock market, unemployment and inflation). Retirees were more optimistic in the third quarter than in the second about maintaining their income, the stock market, inflation and unemployment. The increase in nonretirees' optimism, on the other hand, is mainly attributable to higher expectations for the stock market.

Investors in 2016's first quarter -- leery of the stock market after seeing huge swings during the previous six months -- were more likely to be pessimistic (45%) than optimistic (32%) about the market's performance over the next 12 months. Now, with the market showing less volatility and overall gains since the year's start, investors have regained enough confidence that a bare majority of 51% are optimistic, compared with 23% pessimistic. These gains have come while investor optimism about the other economic indicators has shown little movement. As a result, optimism about the stock market, which lagged behind outlook figures for inflation, unemployment and economic growth in the year's first quarter, has now surpassed the others.

The idea of market volatility still stokes investor concern, however. A majority of U.S. investors (52%) say they consider continued stock market volatility a greater threat to their ability to grow or preserve their money than continued low interest rates (38%).

U.S. investors, after taking a step back at the start of the year, have stepped forward two quarters in a row in regaining the optimism swept away in the economic calamities of 2007-2009. A key factor in the gains is investors' renewed faith in the stock market, which has calmed considerably after a rocky start to the year.

The strong growth in optimism among retirees, who are more likely to rely on investments as a key source of income, is especially positive news. Almost two-thirds of retirees (65%) are optimistic that they will maintain their income over the next 12 months, up from 55% in the second quarter.

Investors are viewing the upcoming election with a wary eye, however, and many fear the results could adversely affect the financial world. More than six in 10 investors (62%) "strongly agree" that they are worried about how the outcome of the presidential election will affect the financial markets, and another 25% "somewhat agree." Only 13% say they somewhat or strongly disagree.

Results for the Wells Fargo/Gallup Investor and Retirement Optimism Index survey are based on questions asked Aug. 5-14, 2016, on the Gallup Daily tracking survey, of a random sample of 1,021 U.S. adults having investable assets of $10,000 or more. 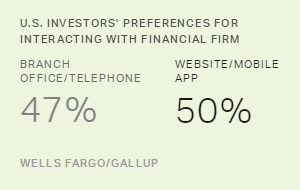 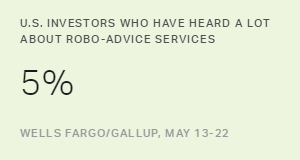