WASHINGTON, D.C. -- Americans are about as worried as they were last year about being victims of a host of different crimes. Their fears have increased on three of the 13 crimes that Gallup asked them about in both years: being a victim of terrorism, being attacked while driving and getting mugged.

Worries about nearly all of these crimes have varied since Gallup first asked about them in 2000, but almost all are within three percentage points of their historical averages. One issue -- fear of being the victim of a hate crime -- is on the high end of its 13% to 22% range since 2000 and is up three points from last year, but this is within the margin of error.

Crimes that Gallup introduced to the list in more recent years -- identity theft (70%) and credit card hacking (69%) -- have not varied much, and remain atop the list of Americans' crime worries. Concerns about email and password hacking (64%), new to the list this year, also rank near the top of the list.

Worries About Being Victim of Terrorism at Highest Since 2009

More than a third of Americans (35%) say they frequently or occasionally worry about being a victim of terrorism, the highest since 2009, when the same percentage reported this level of worry. This is not as high, however, as concerns about terrorism in the first five years after 9/11, which ranged from 38% to 47% -- the latter being the high reached immediately after the terrorist attacks. Increased concern about terrorism this year comes after a shooter in San Bernardino, California, took 14 lives last December and a shooter in Orlando, Florida, killed 49 people in June -- the latter being the deadliest mass shooting in U.S. history.

For the most part, Americans' worries about being the victim of a variety of crimes are at about their respective averages, and none of them have decreased since last year. Gallup reports that household crime victimization is at a new high and Americans' perceptions of crime in the U.S. remain elevated.

Americans slightly favor law and order when it comes to the priorities of the criminal justice system, and President-elect Donald Trump's emphasis on this in the 2016 campaign may have been a factor in his success at the ballot box. If, as president, he is successful in bringing a greater sense of general security for Americans, their concerns about various crimes may decrease. 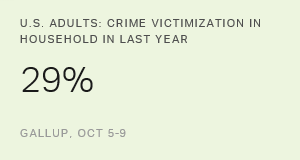 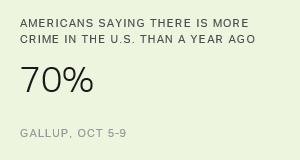 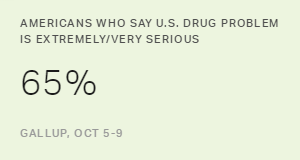