WASHINGTON, D.C. -- U.S. small-business owners are the most optimistic they have been since July 2007, according to the latest Wells Fargo/Gallup Small Business Index. The overall index is now at 100, up 20 points since November and up 33 points from one year ago. This represents the largest quarterly increase in three years. These results are based on the latest Wells Fargo/Gallup survey of small-business owners, conducted Feb. 6-10. Owners are usually more positive about the future than they are about present conditions, and that pattern holds in the latest update. However, the rise in the index from the fourth quarter of last year to the first quarter this year is mostly a function of owners' increased optimism about current conditions, with the first-quarter score of 40 representing a 16-point jump since last quarter. This is as high as it has been since 2007, and is up nearly 70 points from its all-time low of -29 in the first quarter of 2010. The future expectations score of 60 is up four points from last quarter. When asked to name the biggest challenges they face, small-business owners are most likely to mention a group of concerns relating to government policies, including government regulations, taxes and the government in general. The second-largest category of concerns centers on the economics of running a business, including the basic challenge of finding and attracting customers, the effect of the broad economy and the cost of healthcare. This is followed by specific financial concerns, including cash flow, credit and having enough money for investment. Owners also express concern about general marketplace issues such as dealing with competitive challenges and marketing, and about hiring and retaining qualified employees.

Small-business owners have returned to a level of broad optimism not seen since before the recession.

Part of owners' improved mindset as seen in the overall index may reflect their perceptions that regulations will be decreased under the new administration, after President Donald Trump's executive order calling for a regulatory freeze. Owners may also be reacting positively to the general rise in economic confidence and record highs on major stock indices. Previous Wells Fargo/Gallup research showed that more than half of small-business owners believe the new administration and Congress will have a positive effect on their business and that regulations are one of the three most important issues they want the administration and Congress to focus on.

So while optimism has soared, the longevity of this newfound positivity will reflect the degree to which the administration and Congress can deliver on what owners expect.

Results are based on telephone interviews with 602 U.S. small-business owners in all 50 states, conducted Feb. 6-10, 2017. The margin of sampling error is ±4 percentage points at the 95% confidence level. 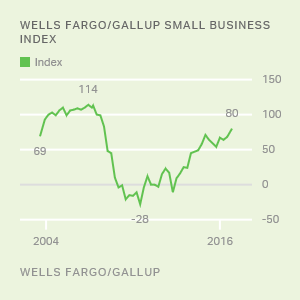