WASHINGTON, D.C. -- Fewer than one in 10 Americans believe it is likely that they will get the Zika virus. This is in contrast to previous polls in which more Americans believed they were likely to get Ebola or the swine flu, two other high-profile viruses.

These results, from a Gallup poll conducted March 10-11, display Americans' low levels of concern about Zika despite widespread reports of how the virus affects fetal development and can be spread by infected individuals traveling from affected areas to areas previously free of the virus. There have been 5,158 Zika cases reported in the U.S. since January 2015 -- in every state except Alaska -- and these cases once garnered significant media attention. The areas in the U.S. that can host mosquitoes capable of carrying Zika are relatively small, and most U.S. cases have involved individuals who had traveled abroad. Millions of Americans contracted the H1N1 virus, or swine flu, and there were 11 confirmed cases of Ebola in the U.S.

Prevalence of Zika Does Not Influence Perceptions

The Centers for Disease Control and Prevention report that of these 5,158 cases in the U.S., 40% were in the South and 36% in the East, while 15% were in the West and 10% were in the Midwest. Despite the large regional differences in the prevalence of infection, perceptions about contracting Zika are similar across the U.S. While more than three-fourths of the individuals who contracted Zika reside in the South and East, upward of about nine in 10 of the people in each of those regions think it is either "not too likely" or "not at all likely" they will catch the disease. In the West and Midwest, where Zika has been far less prevalent, the perceptions are similar.

U.S. Government Trusted to Handle Zika More Than Other Outbreaks

A virus such as Zika can quickly spread across state lines, requiring federal intervention to research, identify, prevent and mitigate the spread of the disease. While largely the responsibility of the CDC, handling these outbreaks will involve a coordinated, multiagency response. As the Zika virus has spread in the U.S., 64% of Americans are at least somewhat confident that the federal government will be able to manage the public health emergency. Americans' confidence is somewhat greater than its past levels for Ebola (52%) and swine flu (59%). This level of confidence in Zika prevention may be attributable to the seemingly "less threatening" nature of the virus bolstering Americans' confidence level.

Spotlighting public health emergencies and outbreaks such as Zika can effectively raise public awareness about protective measures for contact and exposure to a disease. Despite the thousands of Americans infected with Zika, Americans see less risk of contracting this virus than they did Ebola, which had only a handful of U.S. cases. While this perception could be accurate -- because people do not live in areas that have the specific mosquito species that spread the disease, have not had sexual contact with people who have Zika and have not traveled to areas where the Zika virus is prevalent -- it is unclear if Americans are aware of the risk factors for contracting the Zika virus.

Alternatively, these people might be subject to personal biases that influence their perceptions of risk. Individuals depend on various and sometimes conflicting messages from an array of sources to form their opinions. Sometimes preparedness messaging might not adequately reach (or stick with) those most at risk.

Even if Americans do not feel like they are at risk of contracting Zika, if an outbreak were to occur, they trust the government to handle it at least slightly more than they have similar public health threats in recent years. This sentiment is positive news for the CDC and the federal government as a whole, as trust in government has dwindled overall. At the same time, opinion could shift if government operations in containing or addressing the virus falter or are perceived to falter, rightly or wrongly.

Results for this Gallup poll are based on telephone interviews conducted March 10-11, 2017, on the Gallup U.S. Daily survey, with a random sample of 1,025 adults, aged 18 and older, living in all 50 U.S. states and the District of Columbia. For results based on the total sample of national adults, the margin of sampling error is ±4 percentage points at the 95% confidence level. All reported margins of sampling error include computed design effects for weighting. 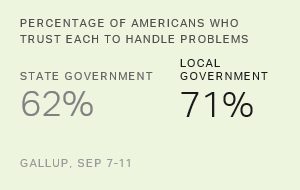