WASHINGTON, D.C. -- The banking industry's image with the American public has climbed to its highest point since the 2008 financial meltdown, with 43% now viewing it positively and 30% negatively. But Americans still view banking less positively than they did in the years leading up to the crisis, when it ranked above the average for other industries Gallup measures. During that period, the banking industry's net positive rating was higher than Gallup's industrywide average. But since 2009, banking has been below the industry average every year. (Industry averages were based on ratings of 24 industries in 2001 and 2002, and have been based on 25 industries since 2003.)

While Other Industries Have Rebuilt Images, Banking Lags Behind

In contrast to banking, the images of most other major industries that suffered serious damage in the financially tumultuous years from 2008 through 2010 have either regained their pre-recession net positive ratings or surpassed them:

Though Americans overall have become more positive in their views of the banking industry during the past two years, views of upper-income Americans have been in negative territory, with a -7 net positive rating in 2016-2017. Offsetting the upper-income negativity, net positive ratings among middle-income Americans have made impressive gains, from -4 in 2014-2015 to +20 for the last two years, while the views of those with lower incomes have stayed roughly the same.

As the U.S. moves far into the second decade of the 21st century, new challenges constantly arise for all industries, and banking is no exception. The industry is wrestling with the problem of engaging millennials. It has been under political attack from prominent Democrats. It has been hit with major scandals. Perhaps most importantly, Americans who are likely to have the most money to invest with banks have the lowest opinions of the industry.

Because they have more income to invest, upper-income Americans have more reason to follow news about banking scandals and political attacks on big banks. The industry's ability to respond to such attacks and to avoid major scandals in the foreseeable future could go a long way toward determining whether wealthier Americans, and Americans in general, will once again view banking in the U.S. as positively as they did a decade ago. 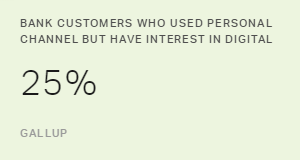 Financial leaders need to find digital-ready customers and then increase their adoption of digital channels.