WASHINGTON, D.C -- Despite recent efforts to discourage migration from origin and transit countries in North Africa to Europe and elsewhere, people's desire to leave the region reached a new high in 2017. Last year, nearly one in three North Africans (32%) said they would like to permanently migrate to another country, up from 28% in 2016. Percentages rose in three countries in the region -- Algeria, Morocco and Libya -- which is a mix of origin, transit and destination countries for migrants from sub-Saharan Africa, West Africa and the Horn of Africa.

The record high level of desire among adults in these countries to migrate comes as the political climate of Europe has become increasingly hostile to migrants in the wake of the migrant crisis in 2015. Leaders of several European and African nations reached agreements last year to attempt to stem the flow of migrants from and transiting through North Africa. The agreements slowed successful migration attempts but shifted the crisis back to departure countries such as Libya.

Who Wants to Move?

Consistent with Gallup's previous findings on the demographics of potential migrants, desire to migrate permanently to another country is highest among the youngest North Africans and those with more education. In 2017, nearly half of North Africans (46%) between the ages of 15 and 29 said they would like to migrate permanently to another country, up from 40% in 2016. Additionally, nearly one-third of North Africans aged 30 to 49 (30%) also voiced their desire to migrate in 2017, an increase from the 24% who said so the previous year.

Where Do North Africans Want to Move?

Europe has typically been the destination associated with North African migration, and the continent remains the most popular desired destination, despite an increasingly hostile political climate for migrants. Among potential migrants, the percentage of those naming France as their desired destination rose six percentage points to 19% in 2017. Germany and Italy remain popular with potential North African migrants as well. Both Saudi Arabia and the United Arab Emirates are also popular preferred destinations for potential North African migrants. However, these two countries are more popular among potential migrants from Egypt than among those from other North African states, who are substantially more focused on Europe.

The increased desire of North Africans to migrate from their country permanently is understandable given the increasingly difficult economic conditions in the region. While roughly one-third told Gallup in 2017 that they would like to migrate, it is unclear how many actually will migrate to another country. Gallup has previously found that the percentage of those who have plans to move is substantially lower than the percentage who would like to move.

European countries remain a popular destination for many potential North African migrants, despite the political climate in Europe having become less favorable. European governments have attempted to take steps to halt or mitigate the effect of additional large-scale arrivals since the migrant crisis. While it's unclear whether the increased desire of North Africans to migrate may contribute to a future wave of migration, it does have potentially negative economic and social implications for the countries in the region whose youngest and most educated residents increasingly want to leave.

Results for this Gallup World poll are based on an aggregation of telephone and in person interviews conducted with 5,011 individuals aged 15 or older residing in Algeria, Libya, Egypt, Morocco and Tunisia in 2016 and 5,030 in 2017. The interviews were conducted with between 1,000 and 1,016 individuals in each country, each year. For results based on an aggregation of adults residing in these countries, the margin of sampling error is ±2 percentage points at the 95% confidence level. All reported margins of sampling error include computed design effects for weighting. 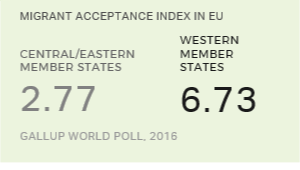