WASHINGTON, D.C. -- Over the past two years, Republicans have become more positive about the direction of their finances than they were across the eight years of the Barack Obama administration, and are more upbeat now than they were in the early years of George W. Bush's administration. Democrats have shown the opposite pattern, becoming less positive in 2017 and this year. These data are part of Gallup's yearly assessment of Americans' personal financial situations. The latest update was April 2-11.

This year, 70% of Republicans and Republican-leaning independents say their finances are getting better and 15% say they are getting worse, for a net positive score of +55, higher than any reading during the Obama or the Bush years.

Obama took office as the impact of the Great Recession was a continuing and major public concern. For Republicans, this was a double whammy: the recession and the election of a Democratic president. As a result, Republicans' net positive views of the direction of their finances plummeted in 2008 from where they had been under Bush, dropping from as high as a net +51 during 2004 to a net -25 in 2009. Republicans' views stayed in net negative territory until 2017, after the election of Donald Trump as president, when their assessments soared back into strongly positive territory.

Democrats and Democratic-leaning independents' views of the direction of their personal finances fell into net negative territory in 2005, well before the recession. They remained underwater for the duration of the Bush administration, reaching a -31 level by 2008. Then despite the recession, once Obama took office, Democrats' views of their personal finances began to recover, rising well into positive territory by 2010 and remaining there through 2016.

Last year, with Trump in office, Democrats' net views of the direction of their personal finances remained positive, but fell to +12. They declined slightly more this year, to +8. Democrats remain more positive about this measure now than they were during most of the Bush years. Still, the overall impact of the presidency on how Americans view their financial future is clear: Americans become much more positive when their party's president is in the White House.

Impact of Politics Not as Strong on Assessments of Current Situation

As was the case for the question asking about the future, Republicans' assessments of their current financial situations are also related to the White House occupant. The percentage of Republicans rating their personal financial situation as excellent or good dropped significantly in 2009, as Obama came into office, and generally stayed lower during his term, albeit with some year-to-year variation. Now, after Trump's first full year in office, Republicans' positive assessments of their finances have soared to 67%, close to the high point of 71% seen during the Bush years.

Democrats' views of their personal financial situations, however, have been much more stable and on average more negative than Republicans' across the past 16 years, regardless of who is president. Democrats' positive views edged up slightly during the Obama years compared with the two Bush terms, but so far have shown no significant downtick, even with Trump in the White House. It may be that views of one's current finances are somewhat more rooted in reality than the projective question, which focuses on making guesses about the direction of one's finances over time.

Americans' views of both the direction and the current status of their personal finances are highly related to income, as would be expected. The higher the income, the more positive the assessment of one's personal finances, both currently and in the future.

But the differences by party generally continue to be evident regardless of income for the question asking Americans about their financial future. Within each of the three income groups, Republicans became much more negative about the direction of their finances during the Obama years than during the Bush years or the Trump years. By contrast, across each of the income groups, Democrats became more positive during the Obama years than was the case while either of the two Republicans was president.

Taken as a Whole, Americans More Positive Over the Past Two Years

Taken as a whole, and driven by Republicans' strongly more positive attitudes, Americans overall have become more upbeat about their personal financial situations over the past two years than they were during the Obama administration, and slightly more positive than in the Bush years.

Americans have become more positive about their personal finances over the past two years, partly reflecting the improvement in the U.S. economy but also reflecting a surge in positivity among Republicans after the election of Trump. It has been well-documented that Americans' assessments of the broad economy are strongly related to the relationship between their underlying political identity and the party of the sitting president. The current results confirm that Americans also view their own personal finances through the lens of partisanship, becoming more positive when the president is from their party and more negative when he is not.

Americans' views of their personal finances are also strongly correlated with their income, underscoring that there is a "real world" factor involved when they make these types of summary assessments. Thus, when it comes to finances, Americans take into account both objective assessments and more subjective feelings about the nation's political environment. The degree to which these attitudes about personal finances are related to actual behaviors such as consumer spending is unclear. If they are, Republicans should be spending more than Democrats at the moment, reflecting their optimism about their current finances and the direction of their finances over the next year.

Whatever the implications, these findings provide further evidence of the power of political identity in shaping the American public's views of many and varied aspects of their lives. 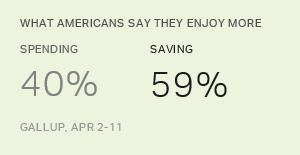 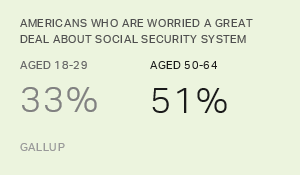