WASHINGTON, D.C. -- Lebanon heads to the polls this weekend for its first election in nearly a decade. The long-awaited election, along with a new voting system, will likely test what remaining faith Lebanese have in their elections: Just 15% of Lebanese expressed confidence in the honesty of their election process in 2017 -- tying the previous lows. Although national elections are supposed to take place every four years, Lebanon's last election took place in 2009. That year, 39% of Lebanese expressed confidence in the honesty of their elections. Since then, the government has postponed elections on the grounds that the winner-take-all system was not representative of Lebanon's different sects and political voices -- and resulted in a parliament that did not reflect the population.

The vote this weekend will use the proportional representation electoral system that was agreed upon only last summer. The new system is supposed to give smaller parties that did not have a chance to compete in the previous system a chance to compete in the new one. The entrance of previously less represented political voices into the election fray has created a new degree of uncertainty about the election's outcome.

Lebanese distrust in the honesty of their elections is one manifestation of their seemingly perpetual belief that their government is corrupt and cannot be trusted. The public almost universally believes that corruption is widespread in their government, with 95% saying this in 2017, up five percentage points from the previous year and one of the highest percentages in Gallup's polling history. Few Lebanese Thriving Ahead of Election

Lebanese will take these long-simmering frustrations with their government into the voting booth with them this weekend, but they will likely also be thinking about their own deteriorating lives under the current leadership. Sixteen percent of Lebanese in 2017 rated their current and future lives positively enough to be considered "thriving" -- down seven points from the previous year and on the lower end of percentages since 2006. For the past decade, Gallup has asked residents of Lebanon and the rest of the world to evaluate their lives on the Cantril Self-Anchoring Striving Scale, where "0" represents the worst possible life and "10" represents the best possible life. Gallup classifies people as "thriving" if they rate their current lives a 7 or higher and their lives in five years an 8 or higher, and "suffering" if they rate both their current and future life situations a 4 or lower. Those in the middle are "struggling."

Despite Lebanese President Michel Aoun's recent warnings against vote-buying by candidates and instigating sectarianism, mainstream media, word-of-mouth and social media are all reporting unprecedented levels of vote-buying -- with well-funded candidates reportedly being more generous than ever in enticing voters.

This situation is unlikely to instill much faith among an electorate that has very little confidence in the electoral process to begin with. The bigger question is whether Lebanese will listen to Aoun's call and vote their consciences at what could be a political turning point for Lebanon.

These results are based on face-to-face interviews with 1,000 adults, aged 15 and older, conducted in Lebanon April 20-May 29, 2017, in Arabic. For results based on the total sample of national adults, the margin of sampling error is ±3.6 percentage points at the 95% confidence level. The margin of error reflects the influence of data weighting. In addition to sampling error, question wording and practical difficulties in conducting surveys can introduce error or bias into the findings of public opinion polls. 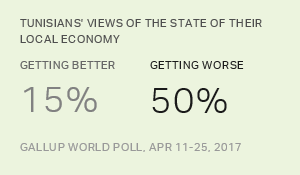