When a country leads the world in government corruption and it's been a bad time to find a job for the past decade, sometimes all it takes is a little push.

This is exactly the situation that is playing out in Lebanon right now, where maybe as many as a million Lebanese have been taking to the streets since the government approved imposing taxes on a number of everyday services and products, including WhatsApp VoIP calls.

But the imposed (and then walked-back) tax of the popular messaging and VoIP service was just a tipping point; the largest protests in Lebanon in 14 years are largely a manifestation of decades of frustration with the country's corrupt political system and with economic conditions that are only getting worse.

In fact, Lebanon led the world last year in perceived government corruption, with nearly all Lebanese adults (93%) saying corruption is widespread throughout their government. But this has been the status quo for years in Lebanon; that percentage hasn't dropped below 90% since 2012. Many of the protesters blame this corruption for the country's ongoing -- and worsening -- economic woes. Lebanon is already one of the world's most indebted countries, and jobs are growing increasingly scarce, particularly for young people.

While this situation is getting worse -- or as some experts predict, is heading for a meltdown -- it isn't an entirely new experience for Lebanese. For the past decade, a strong majority of Lebanese adults have said it is a bad time to find a job where they live. The percentage saying it is a good time to find a job has rarely reached 20%. Deteriorating economic conditions and a corrupt political system have long been sources of deep-seated public discontent in Lebanon. But until recent weeks, these factors had never pushed Lebanese to the brink of demanding that all of the country's political elite be fired. Thousands have chanted "all of them means all of them" and shared the protest slogan widely across social media networks.

Even during the Arab Uprisings in 2011, the Lebanese public remained relatively quiet. So the bigger question is, why now?

It's possible that the tax hike on WhatsApp and other services was just a "bridge too far" for some Lebanese. As one protester said on a local TV channel, "WhatsApp is the only social media we have to vent our frustrations; now they want to tax our venting as well."

Historically, many revolutions or major public protests have been triggered by rising prices of food staples. It appears that Lebanon may mark the first time that a major revolt is triggered by taxing the use of a social media app.

Under pressure, the government reversed its decision on the tax and announced new reforms -- but it is likely way too late to reverse the course of the future that Lebanese have decided to pursue. 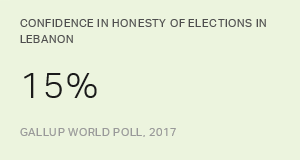 Election Could Be Political Turning Point for Lebanon

Lebanese voters head to the polls this weekend to vote in Lebanon's first election in nearly 10 years; just 15% are confident in the process.