WASHINGTON, D.C. -- Britons' views of U.S. leadership quickly soured after President Donald Trump's election, with approval ratings plummeting 26 percentage points between 2016 and 2017. Their opinions have reached a new low point, however, during his fourth year in office: The 15% of Britons who approve of U.S. leadership in 2020 represents a record low not only for the Trump administration, but also for any U.S. administration since 2006.

While Britons' views of U.S. leadership took a major hit in 2017, they have dropped an additional 18 points since. Although the British public has evident disdain for the Trump presidency, this cannot be said about the U.K.'s leadership. Prime Minister Boris Johnson and Trump apparently have an amicable relationship, with Johnson previously stating that Trump has "many, many good qualities." Additionally, Nigel Farage -- former European Parliament member and current leader of the Brexit Party -- was a staple at Trump campaign rallies.

Line graph. Trend in British approval and disapproval of the job performance of China's leadership since 2006. Approval fell from 22% in 2019 to 12% in 2020, a 10-percentage point drop matching the drop seen with U.S. approval.

However, given the U.K.'s deep roots to Hong Kong, a former British Empire colony, disapproval of China's leadership may also be linked to a new security law passed on the eve of the 23rd anniversary of the city's handover to China. The security law led to mass demonstrations and clashes with police in Hong Kong. It has been criticized by the U.K. government, which has gone so far as to allow up to 3 million Hong Kong residents the opportunity to settle in the U.K. and apply for citizenship.

As previously reported, the U.K.'s approval of Germany's leadership matched an all-time high in 2020. Since 2012, approval of the leadership of Germany -- led by Chancellor Angela Merkel -- has not dipped below 50%. Of all the major world powers that Gallup asks U.K. residents about, Germany is the only country whose leadership is seen favorably by Britons.

So much has changed around the world because of the COVID-19 pandemic, racial tensions and social unrest. With China and the U.S. serving as the epicenters of many of these issues, it comes as little surprise that confidence in how these countries are governed has dropped. That being said, amid a highly anticipated U.S. presidential election -- which is still undecided as of this posting -- as well as rising tensions between the U.K. and China over new security laws enacted in Hong Kong, Britons' approval of these nations' leadership could fluctuate even further depending on how the final months of 2020 play out. 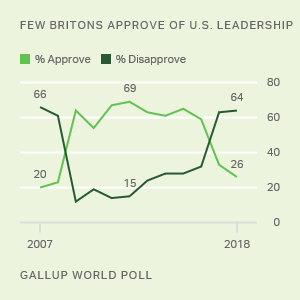