WASHINGTON, D.C. -- Nearly one in three Americans (32%) say that drug use has been a cause of trouble in their family. The latest figure, similar to measures from 2018 and 2019, reflects a sizable increase since the 1990s and early 2000s in the percentage of U.S. families that have experienced struggles with drugs. 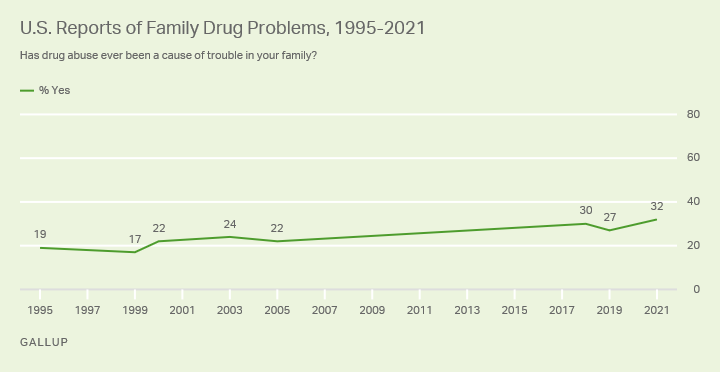 These data were collected as part of Gallup's annual Crime poll, conducted Oct. 1-19.

The latest results conform with federal statistics on drug-involved overdose deaths, which increased nearly every year from 1999 to 2019, according to data from the Centers for Disease Control and Prevention.

Americans' reports of drugs causing problems within their family have increased among residents of all U.S. regions and across all political party, education, urbanicity and income groups since the early 2000s.

The largest increases in reports of family drug issues have been experienced by Americans living in rural areas and those in high-income households, both up by 11 percentage points.

A majority of Americans (64%) maintain that the nation's drug problem is extremely or very serious -- though this figure is, by one point, the lowest in Gallup's trend since 2000 and down nine points from 2019. The percentage describing the drug problem in the U.S. as serious has generally hovered around the 70% mark, though it was markedly higher in Gallup's first measure in 2000, at 83%. Descriptions of the nation's problem with drugs may have been slightly elevated in 2019, after Purdue Pharma reached a settlement to resolve thousands of lawsuits against the company for its role in the opioid crisis.

Meanwhile, the percentage of Americans who say the drug problem in their local area is extremely or very serious is stable, at 31%. This measure has remained in a narrow range, between 29% and 34%, since 2000. 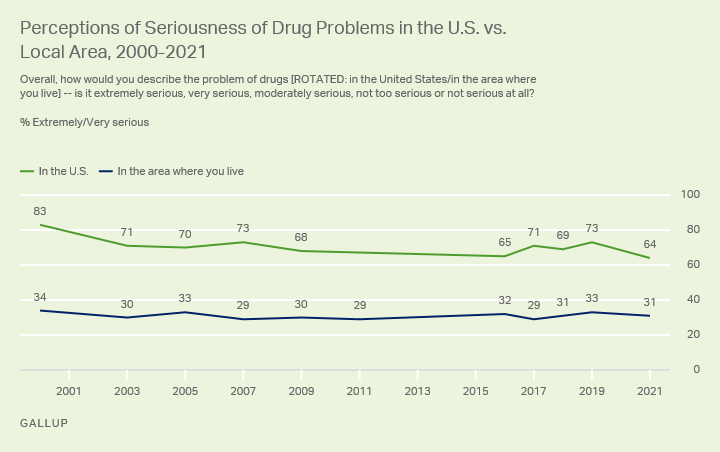 Issues with drugs are affecting more U.S. families than they once did. The growth in reports of family drug problems cuts across all major demographic groups, likely reflecting the widespread nature of the national opioid crisis.

Most Americans continue to view the problem of drugs, nationally, as highly serious. The decrease in this sentiment in the latest poll may be related to the fact that, over the past two years, Americans' biggest concerns -- and the media's -- have mostly centered on COVID-19, the 2020 election and the economy, taking attention away from drugs in the scope of all problems facing the U.S.

Meanwhile, as a local issue, the problem of drugs remains just as serious to Americans as it has been over the course of Gallup's trend. But in recent years, the issue has become personal for a larger segment of Americans who have faced troubles with drugs in their own household.