Nearly four in 10 adults worldwide say their lives have been affected to some degree by depression and anxiety, according to the latest Wellcome Global Monitor study.

In 2020, close to one in five adults (19%) said they personally had felt so anxious or depressed that they could not continue their regular daily activities for two weeks or longer, and another 19% said this had happened to a family member or close friend.

In certain regions of the world -- notably Latin America, Australia/New Zealand, Western Europe and Northern America -- a majority of people aged 15 and older said they had experienced these conditions or knew somebody who had. 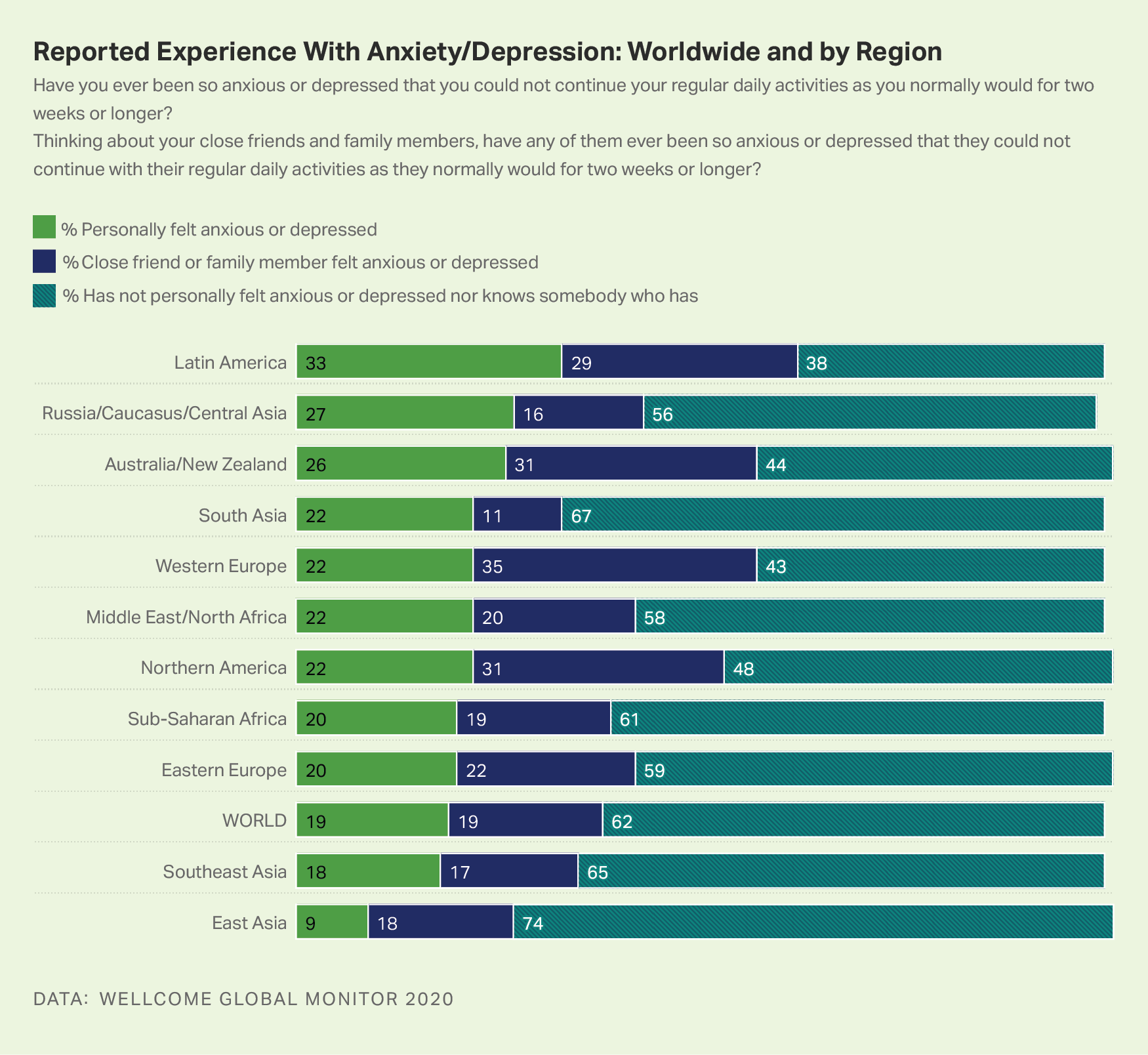 The 2020 Wellcome Global Monitor focused on an equally important area -- individuals' experiences with mental health issues (specifically anxiety or depression) and how people view the role of science in mental health.

Crucially, the effects of anxiety and depression are felt not only broadly, but frequently as well: Nearly three in four adults (73%) who reported experiencing anxiety or depression said they have felt this way more than once in their lives.

Worldwide, people who said they had experienced serious anxiety or depression were most likely to say they talked to friends or family to feel better, with more than three in four (78%) saying they coped this way. Slightly more than seven in 10 said they had improved healthy lifestyle behaviors (73%) or spent time in nature or the outdoors (71%) to alleviate their anxiety or depression.

On the flip side, taking prescribed medication (49%), talking to a mental health professional (43%) and engaging in religious/spiritual activities (43%) were among the least cited ways people had tried to feel better. 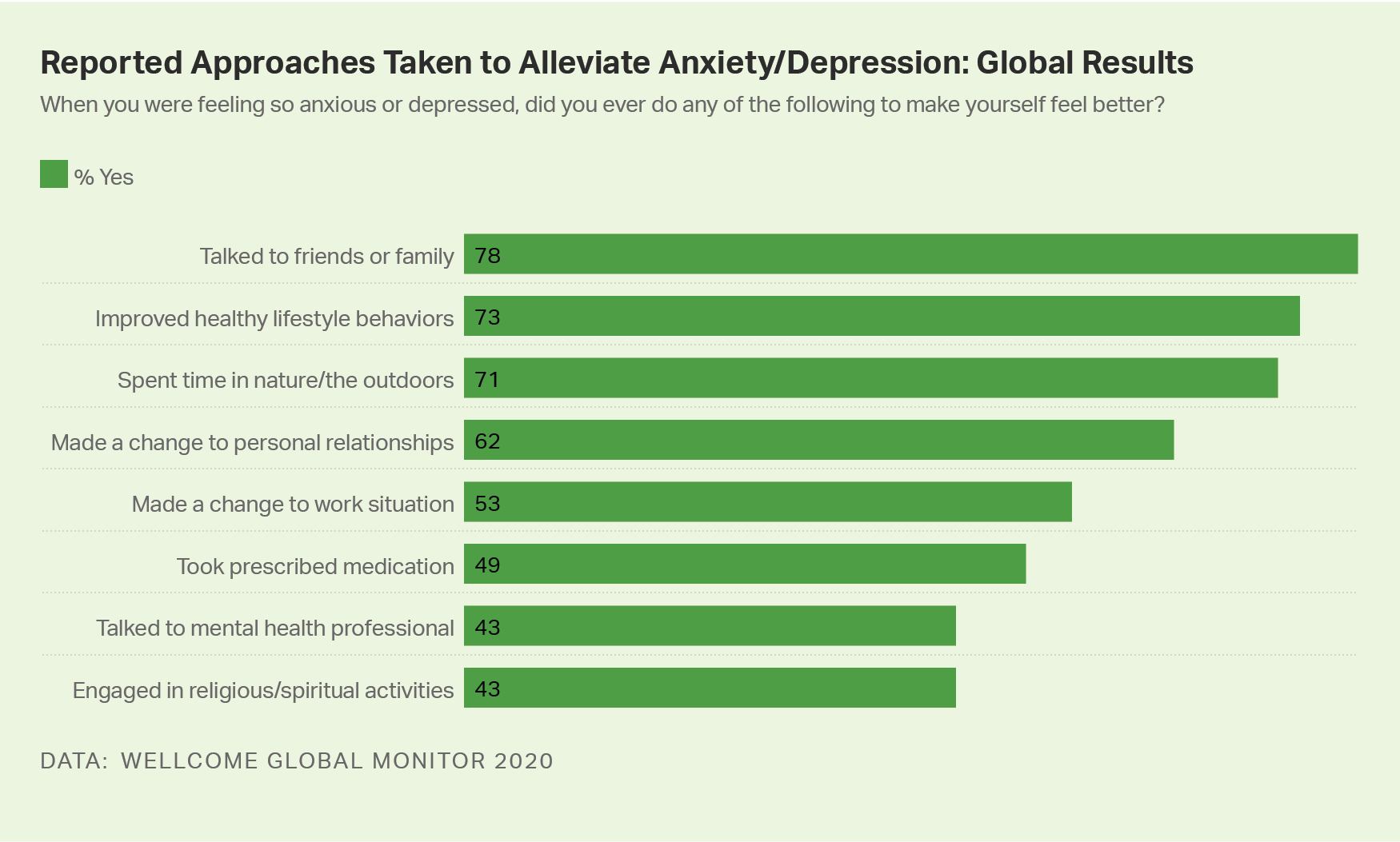 Bar chart. The percentages of people who experienced anxiety and depression who say took specific actions to make themselves feel better.

These patterns vary, to some degree, when considering the overall income of a country, a measure that serves as a proxy for a country's level of economic development. People in low-income countries and territories were among those most likely to choose religious or spiritual activities, and those in high-income countries were among the most likely to choose taking medication and talking to mental health professionals.

It's important to emphasize that these approaches are not mutually exclusive -- individuals can, and often do, try multiple methods to feel better. The 2020 Wellcome Global Monitor finds that 85% of adults worldwide who said they had experienced anxiety or depression had tried at least three of the eight methods tested in the survey.

People who said they had experienced anxiety or depression and had taken at least two of the eight actions included in the 2020 survey were asked about the helpfulness of the methods they had tried. Overall, nearly nine in 10 (87%) reported finding at least one of the various methods they had tried as being "very helpful."

In general, the same approaches that individuals most commonly said they had used to feel better were also the ones they were most likely to describe as being very helpful. However, the most popular approach -- talking to friends and family -- lags behind spending time in nature/the outdoors and improving healthy lifestyle behaviors in terms of perceived helpfulness. 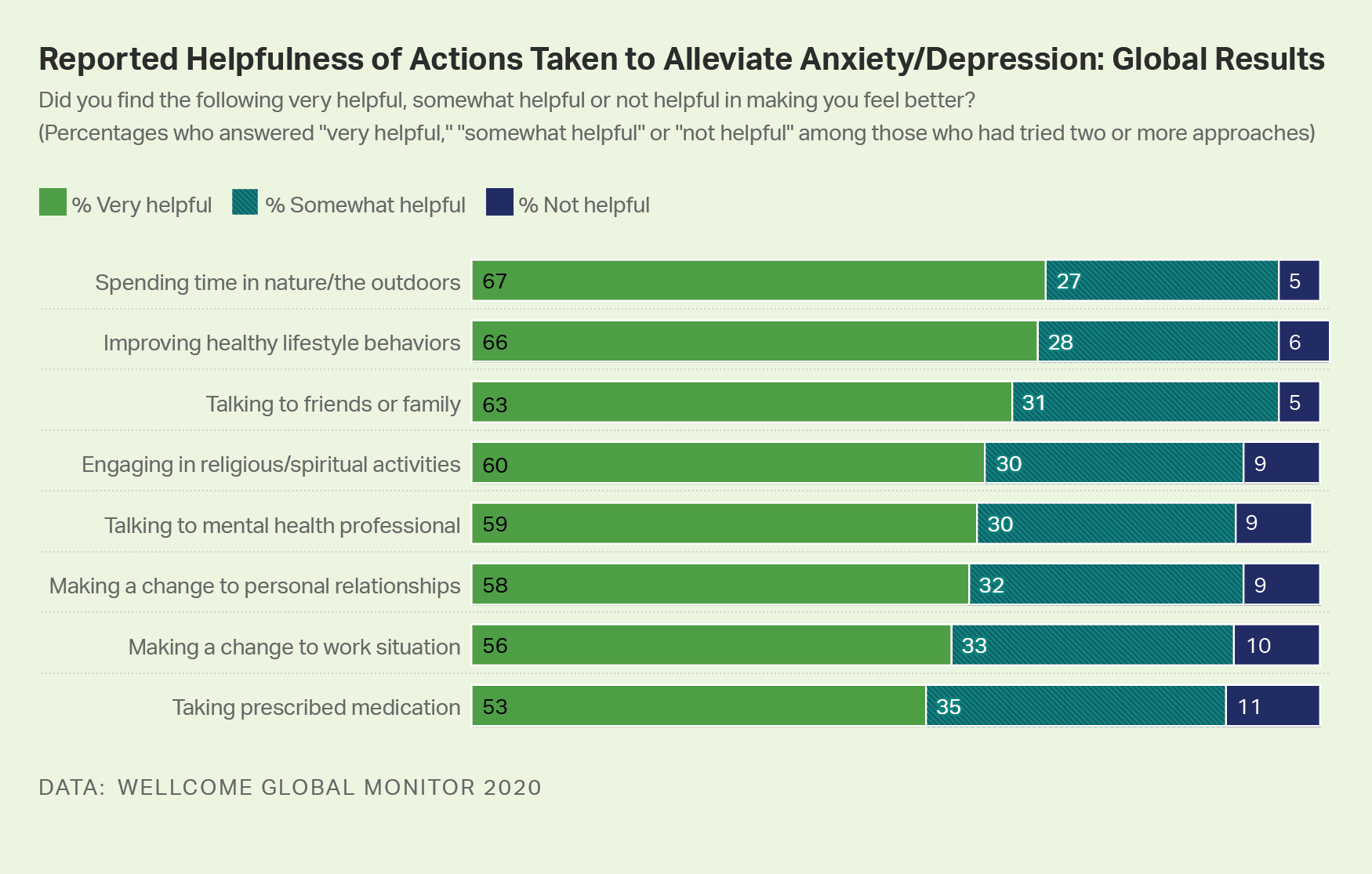 Bar chart. Percentage of people who answered, "very helpful," "somewhat helpful" or "not helpful" among those who had tried two or more approaches to make themselves feel better.

Taking prescribed medication, meanwhile, was judged as being less effective than the other approaches tested on the survey -- though a slight majority (53%) still described it as being very helpful.

Globally, nearly one in five adults in 2020 said they had been so anxious or depressed that they could not continue their regular daily activities for two weeks or longer. Although the rate varies in different parts of the world, substantial portions of people, regardless of where they live, have been affected.

While the scientific and medical communities have an important role to play in addressing these issues, they may need to look more closely at the full range of actions that people with anxiety or depression take to feel better -- rather than turning solely to the "familiar tools" such as prescribed medication -- to improve extreme anxiety or depression.

Learn more about how the Wellcome Global Monitor works.

Does having access to scientific knowledge lead to people feeling more included in its benefits? The Wellcome Global Monitor survey indicates so.