WASHINGTON, D.C. -- Investors' outlook for the U.S. investing climate has worsened in the second half of the year as their levels of optimism about economic growth, unemployment and inflation all have dimmed. At the same time, their levels of optimism about the stock market and reaching their investing goals remain steady at fairly positive levels.

The overall effect is a decline in the Gallup Investor Optimism Index from +39 in the prior survey (conducted in the second quarter) to +10 in the fourth. 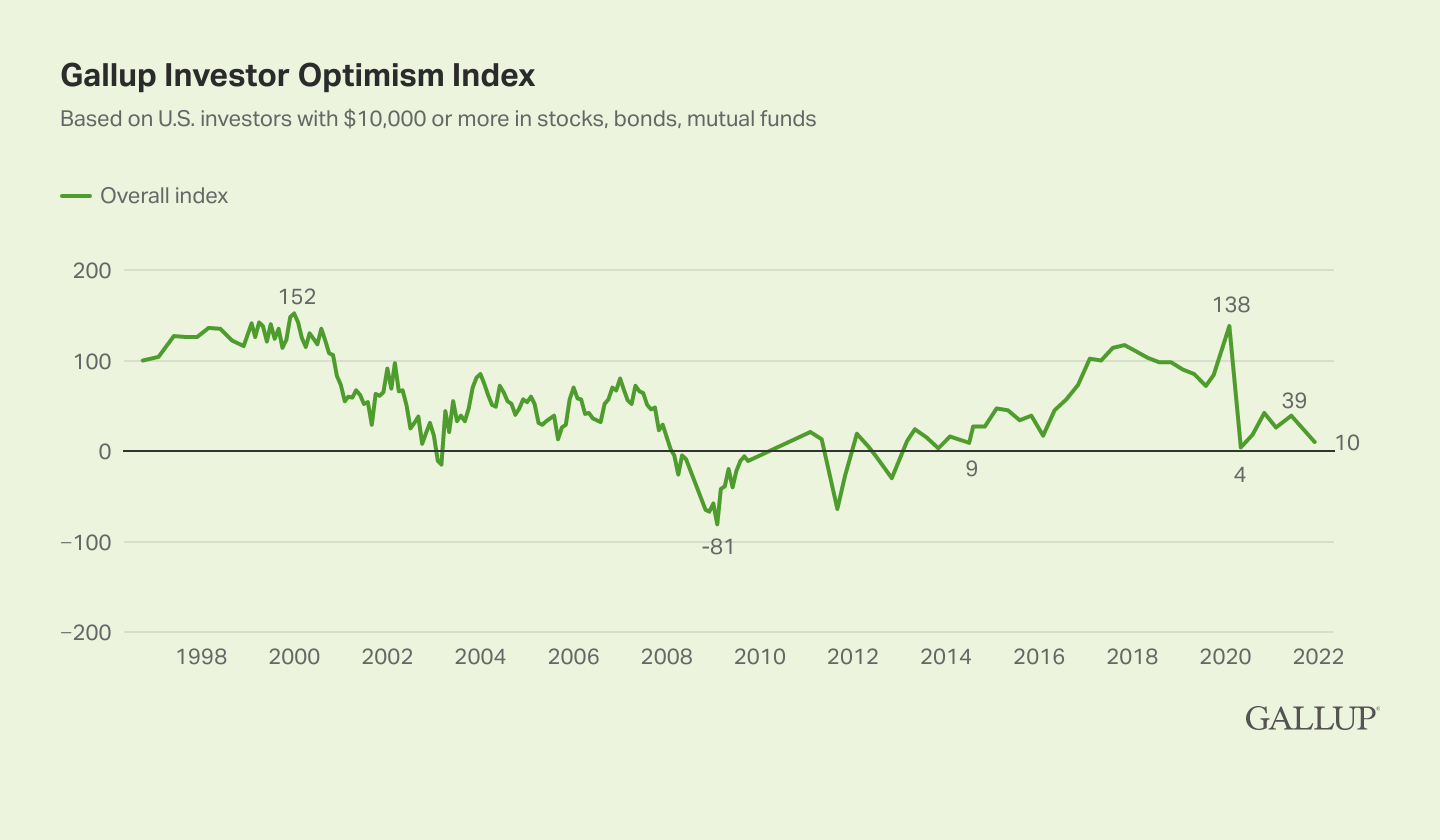 The latest drop in investor optimism, based on a Nov. 1-7 survey, puts the index close to its lowest point of the pandemic so far -- a +4 in the second quarter of 2020. Before that, the index had not been this low since 2014.

The Gallup Investor Optimism Index is a composite of investors' ratings of four aspects of the economy and three aspects of their personal finances and investments. Since its inception in 1996, the index has ranged from +152 (in January 2000) to -81 (in February 2009). Investors, for this survey, are defined as adults with $10,000 or more in stocks, bonds or mutual funds, either within or outside of retirement accounts.

Investors' net optimism -- the percentage optimistic minus the percentage pessimistic -- has fallen sharply since June on three components of the index: economic growth, unemployment and inflation. Attitudes are now more negative than positive on these three aspects of the index. At the same time, investors' outlook for the stock market has been stable at a relatively positive +22, similar to its level over the past year. 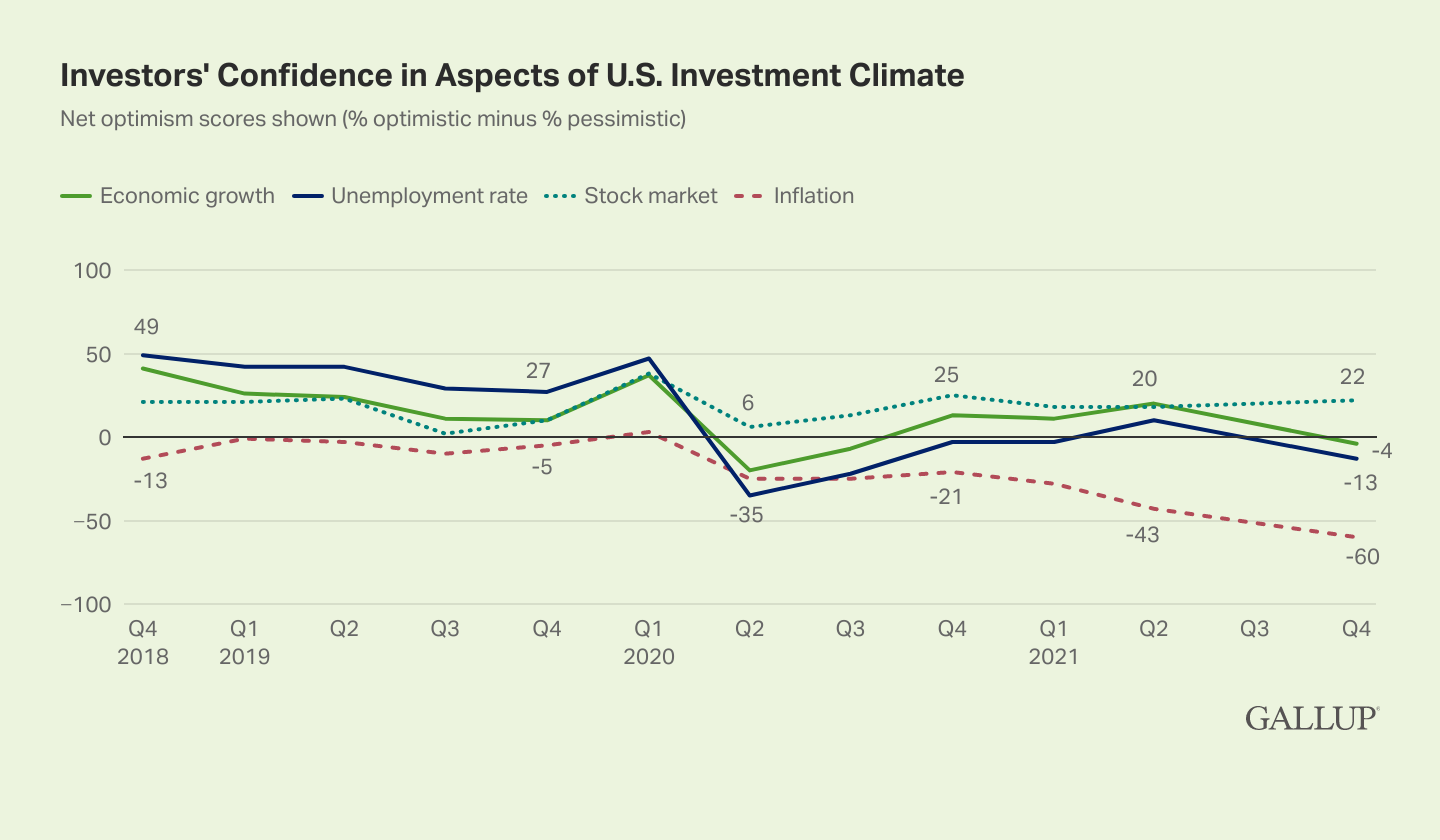 Line graph. Trend from Q4-2018 to Q4-2021 in U.S. investors outlook for four aspects of the economy -- economic growth, unemployment, the stock market and inflation. Figures shown are net optimism score, which is the percentage optimistic minus pessimistic about the effect each dimension will have on the overall investment climate for the next 12 months. Net optimism has declined sharply on inflation over the past year and is now -69. After recovering from negative index scores at the start of the pandemic, optimism about economic growth and unemployment have again turned slightly negative, at -13 and -4, respectively. Confidence in the stock market has remained positive, and is now +22.

Meanwhile, investors' outlook for their personal finances is little changed this quarter. They have become slightly less confident about reaching their 12-month investment targets, with net optimism on this falling nine points to +19. However, attitudes are steady at a more positive level with respect to reaching their five-year investment goals (now +34) as well as maintaining their household income (+32).

The fourth-quarter poll also measured investors' views on a proposal included in early versions of President Biden's Build Back Better bill, which would require banks to report annually to the IRS on the total amount deposited and withdrawn from most U.S. bank accounts. Although the provision was removed from the reconciliation bill in November following pressure from some Democratic members of Congress, it could be reinstated before final passage.

Two-thirds of investors (67%) indicate they have heard about the plan, described as "a proposal in Congress to require banks to send the Internal Revenue Service (IRS) information about the total amount of money deposited and withdrawn from most U.S. bank accounts each year. This would be done to identify people and businesses who are not reporting income to the IRS."

After reading this description, 21% of investors said they favored the proposal, while 53% opposed it and 25% were unsure. Opposition is stronger among those familiar with the plan -- 16% in favor and 71% opposed, with 13% unsure.

Investors were then provided a longer description of the proposal, which included several arguments for and against it. The statements were rotated so that half of investors read the pro arguments first and the con arguments second, while the others had the opposite order:

Sponsors of the bill argue that the bank reporting plan would help the IRS identify tax evasion, generate billions of dollars in unpaid taxes, and help pay for needed programs without raising taxes.

Opponents of the bill argue that the bank reporting plan would be an invasion of Americans' privacy, would give the government too much power, and could expose people's bank accounts to fraud.

After reading these statements, fewer investors responded that they were unsure about the proposal (16%), but investors remained about two-to-one opposed to it: 26% in favor and 58% opposed.

Learn more about how the Gallup Investor Optimism Index works.

The sample for this study was weighted to be demographically representative of the U.S. adult population, using the most recent Current Population Survey figures. For results based on this sample, one can say that the maximum margin of sampling error is ±7 percentage points at the 95% confidence level. Margins of error are higher for subsamples. In addition to sampling error, question wording and practical difficulties in conducting surveys can introduce error and bias into the findings of public opinion polls.

Americans' positive ratings of capitalism (60%) and socialism (38%) are unchanged over the past two years, though their ratings of big business are slightly less positive (slipping six percentage points to 46%).