WASHINGTON, D.C. -- Unrest erupted across Kazakhstan last week as Kazakhstanis took to the streets in the country's major cities. The Kazakhstani government's seemingly modest decision to remove a cap on the price of fuel likely contributed to breaking the dam of pent-up grievances among the country's public.

Gallup data, collected since 2006, offer insight into Kazakhstanis' mindsets in the leadup to the ongoing turmoil.

Quick Summary: Unlike many other former Soviet republics, Kazakhstan has extensive mineral wealth, and in recent years the government has adopted an economic reform program intended to capitalize on those deposits and diversify the country's economy.

As part of their reform efforts, the Kazakhstani government lifted its caps on fuel prices earlier this month. After this decision, the price of some fuel doubled virtually overnight, and Kazakhstanis took to the streets in protest. Protests started in the west but rapidly spread to most major cities. This unrest has resulted in several deaths and substantial destruction in the country's urban centers and the deployment of troops from Russia.

Confidence in Government Dropped to Record Low: Slightly more than half of Kazakhstanis (54%) expressed confidence in their country's national government late last fall. This new record low represents an 18-percentage-point decline from the 72% who said the same in 2020. It is also substantially below the previous low point of 60% recorded in 2014 when declining oil prices hobbled the Kazakhstani economy. 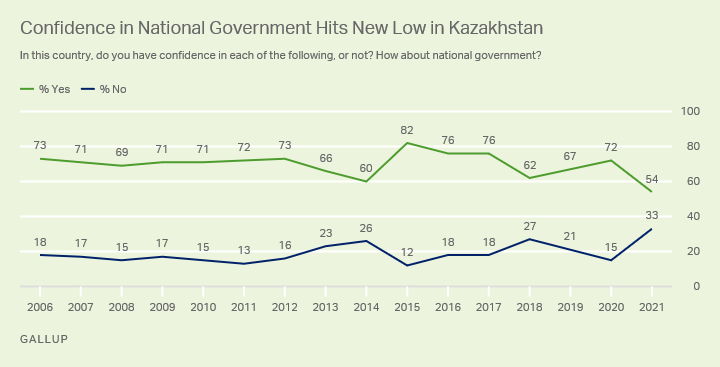 Line graph. Kazakhstanis' confidence in their national government declined to a record-low 54% in 2021, down from 72% the previous year.

After years of confidence in the honesty of their elections being at or above 40%, this number fell to 33% in 2021. This may reflect Kazakhstanis' dismay with changes to election laws prior to the country's January 2021 elections that gave political leaders more control of candidate lists. The changes effectively stripped voters of their ability to choose candidates from party lists. 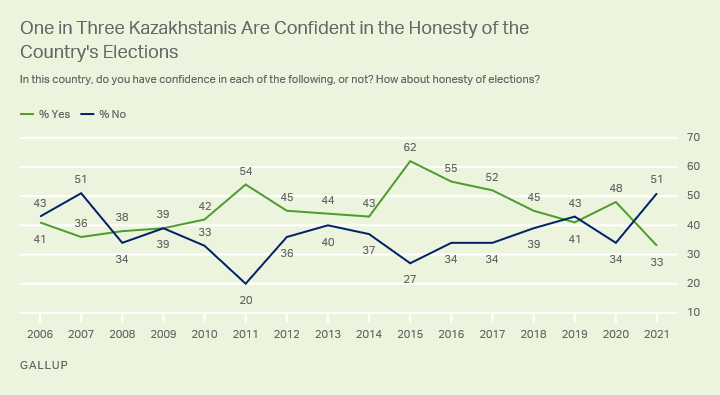 Line graph. 33% of Kazakhstanis are now confident in the honesty of the country's elections, down from 48% who said the same in 2020.

More Than One in Five Kazakhstanis Struggling to Get by: Last fall, 23% of Kazakhstanis said they were finding it difficult or very difficult to get by on their current household incomes. While well below the record high 42% who said the same in 2007, the current level is near twice the 12% and 13% who reported they were having difficulty getting by in 2019 and 2020. 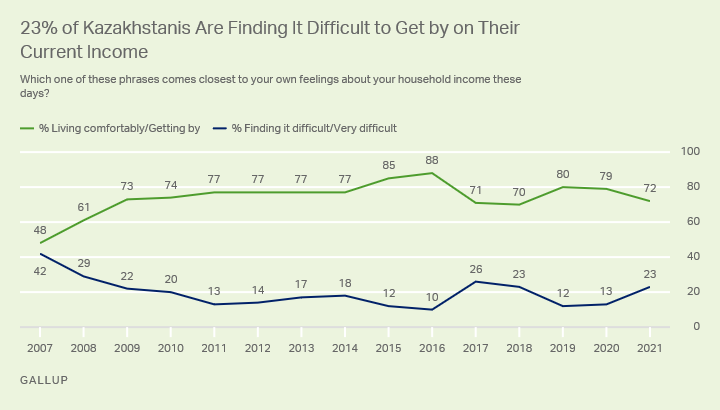 Line graph. Twenty-three percent of Kazakhstanis are currently finding it difficult or very difficult to get by on their current household incomes, up from 13% who said the same in 2020.

Implications: The unrest in Kazakhstan echoes a similar pattern to the 2019 civil unrest in Lebanon, ostensibly caused by the government's decision to impose a tax on WhatsApp -- or the unrest in Chile the same year, sparked by a hike in public transportation fees.

While the Kazakhstani government has already repealed the removal of the price cap and imposed restrictions on the prices of other fuels, the damage has already been done. Prior to the unrest, 80% of Kazakhstanis were satisfied with the freedom in their lives. This is likely to drop substantially following the current crackdown on demonstrators, adding to the reservoir of grievances among the public.

These results are based on face-to-face interviews with 1,000 adults, aged 15 and older, conducted in Kazakhstan Sept. 3-Oct. 19, 2021. For results based on the total sample of national adults, the margin of sampling error is ±3.8 percentage points at the 95% confidence level. The margin of error reflects the influence of data weighting. In addition to sampling error, question wording and practical difficulties in conducting surveys can introduce error or bias into the findings of public opinion polls.

Kyrgyzstanis Souring on Leadership, Life Ahead of Turmoil

Before the recent unrest, Kyrgyzstanis' approval of their now-former president, Sooronbai Jeenbekov, had dropped from 77% in 2018 to 57% in 2019.