WASHINGTON, D.C. -- Americans' belief that they are making financial progress has yet to recover after slumping last year. Forty-one percent of U.S. adults now say they are better off financially than a year ago. That is up slightly from 35% in January 2021 but still well below the record-high 59% reporting they were better off in January 2020, right before the start of the coronavirus pandemic.

An identical 41% of adults now say they are financially worse off than a year ago, also up from 36% in 2021. Meanwhile, the percentage volunteering that their financial situation is the same has dropped 10 percentage points to 18%. 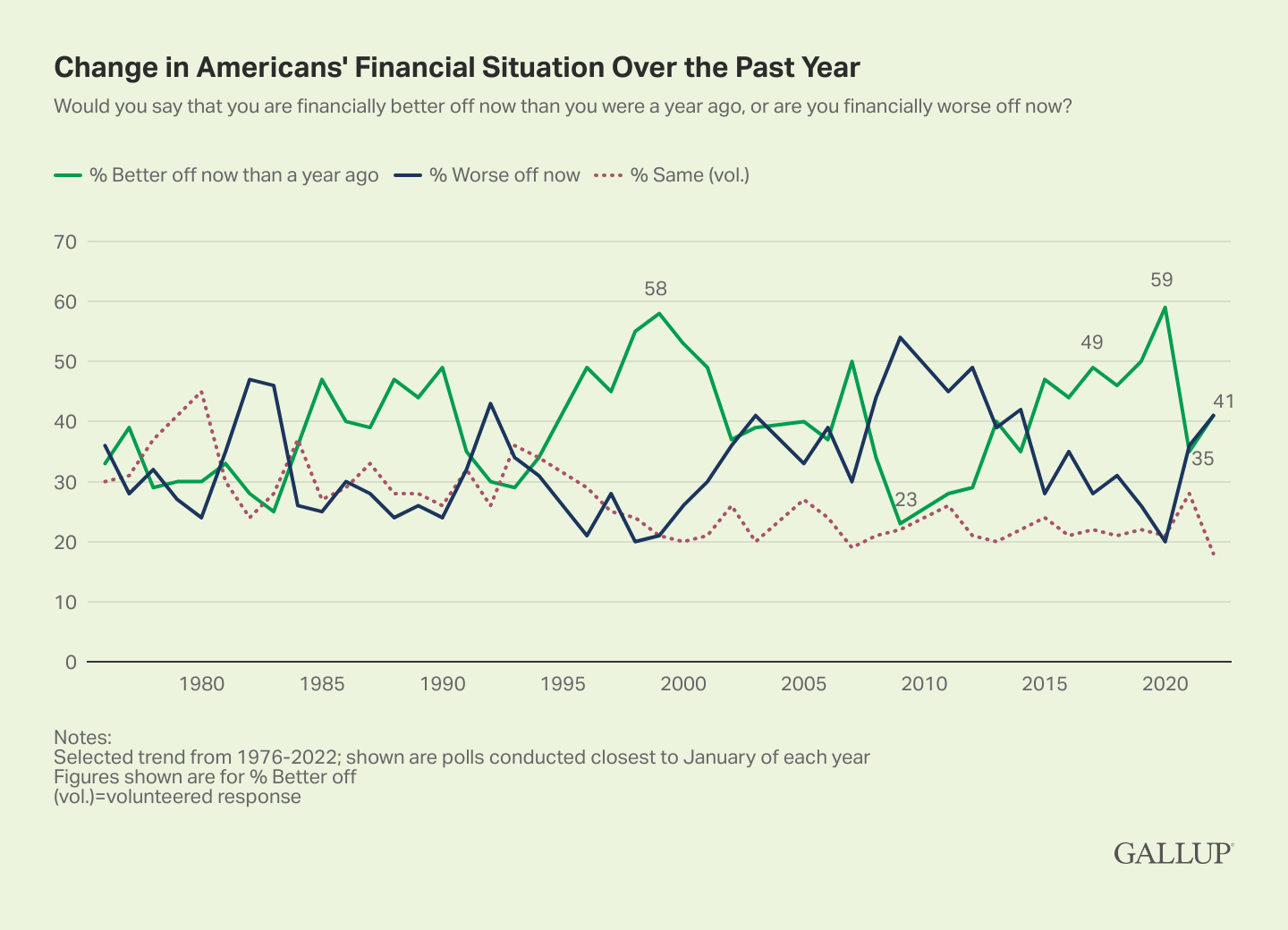 Line graph. Trend from 1976 to 2022 in Americans' perception of whether they are better off or worse off financially than a year ago, or if their finances are the same. Selected trend showing poll closest to January for each year. The percentage saying they are better off has varied over the years between 23%, in 2009, and 59%, in 2020. The latest figure, 41%, is up slightly from 35% in 2021.

The latest findings, from a Jan. 3-16 Gallup poll, come as consumers are experiencing the negative effects of inflation, which is at its highest level in 40 years. About half of U.S. adults (49%) told Gallup in a separate survey conducted in January that recent price increases have caused them financial hardship.

Americans' pandemic-era doubts that they are advancing financially contrast with the prior six years, from 2015 to 2020, when significantly more said they were better rather than worse off. Today's sentiment is similar to what Gallup found in 2013 and 2014, and in the early 2000s, when Americans were about evenly divided in these views.

Historically, public opinion about their finances has mostly varied between times when Americans were decidedly upbeat about their financial trend and periods when similar proportions felt better versus worse off. Only in three periods -- all in proximity to U.S. recessions -- did substantially more Americans say they were worse off rather than better: in the early 1980s, in the early 1990s and from 2008 to 2012.

As is typical, Americans' forecast for whether they will be financially better or worse off next year is positive, with 60% expecting to be better off and 27% worse off.

The percentage of Americans who foresee improvement in their finances has dipped (although not significantly) from last year's 63%. Again, inflation could be a factor behind this sentiment stagnating, as a record-high 79% of Americans said in the same poll that they expect inflation to continue rising over the next six months.

Both the current and 2021 readings contrast with the all-time high for financial optimism. That was recorded just before the pandemic, in January 2020, when 74% expected to be better off in a year's time. Still, Americans' current optimism about their finances is slightly better than the historical average of 56% since Gallup began asking this question in 1977. 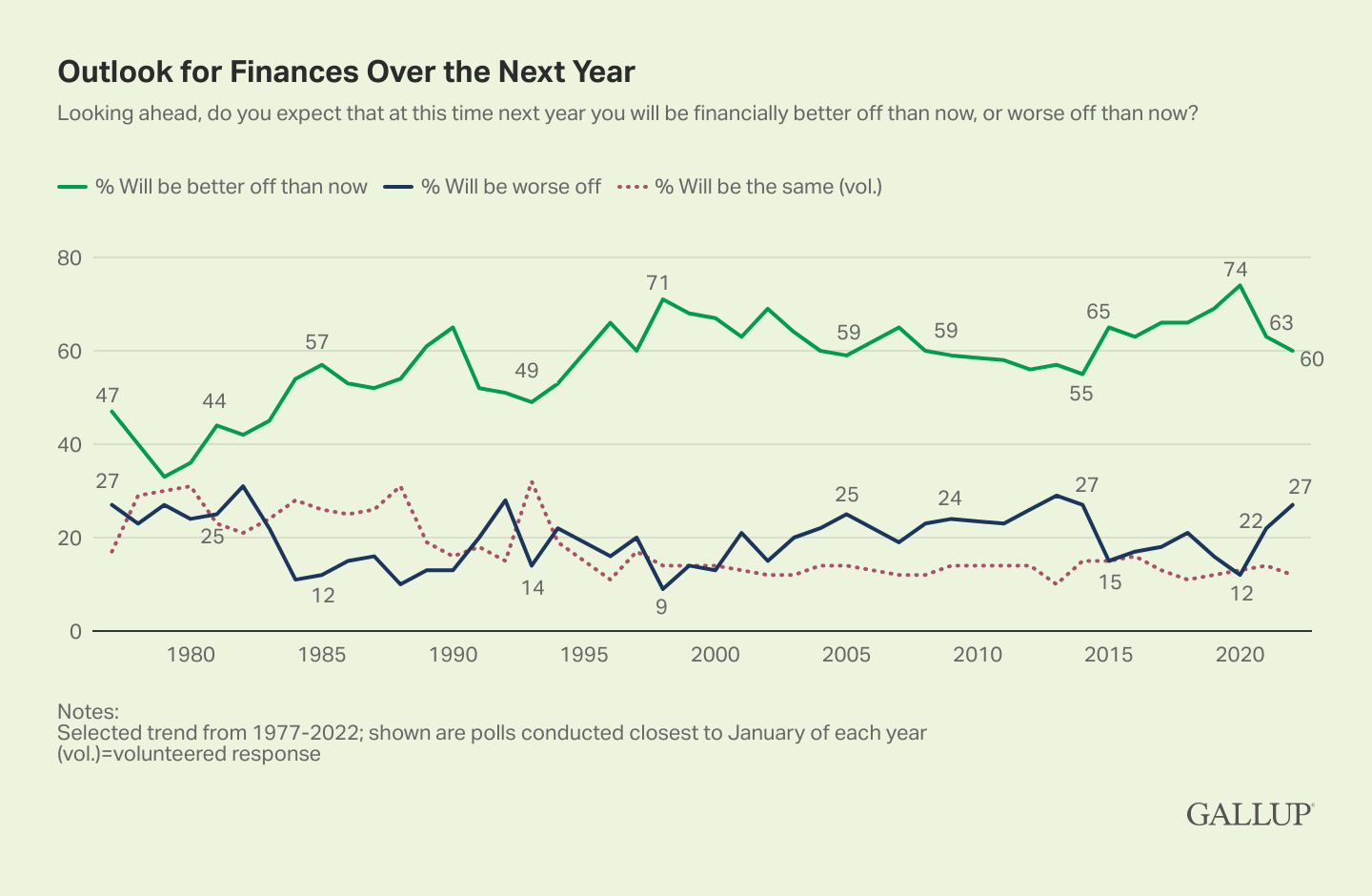 Line graph. Trend from 1977 to 2022 in Americans' prediction of whether they will be better off or worse off financially at the same time next year, or if their finances will be the same. Selected trend showing poll closest to January for each year. Percentage expecting to be better off has consistently outnumbered those predicting they will be worse off. Since 1995, the figure has varied from between 55% (in 2014) and 74% (in 2020). It fell to 63% in 2021 and 60% in 2022.

Lower-Income Adults Feeling Better, Financially, Than a Year Ago

Lower-income Americans' assessments of their personal financial situation have changed the most over the past three years.

By contrast, middle- and upper-income adults' positive perceptions of the recent trend in their finances are flat, with 33% and 48%, respectively, saying they are better off. But the percentages of these groups saying their finances are worse have jumped substantially.

Lower-income Americans are also the most optimistic about their household income over the next year, with 71% expecting to be better off, similar to their outlook each of the past two years. At the same time, optimism has waned among middle- and upper-income Americans, and now about six in 10 in each group are optimistic.

Democrats Moderately Upbeat About Their Finances

Currently, 51% of Democrats versus 30% of Republicans say they are better off financially than they were a year ago. Democrats' rating has significantly improved from the 32% to 40% range recorded during Donald Trump's presidency. Republicans' rating, by contrast, is substantially worse now than under Trump, when as many as 76% said they were better off.

Today's gap in Democrats' and Republicans' assessments of their finances is expected at a time when Americans' views on anything that could reflect on the nation's leadership are shaded by partisanship.

Although Democrats' perception of their finances has improved since Joe Biden took office, their assessment is not nearly as upbeat today as Republicans' was during the first three years of Trump's presidency. At the same time, Republicans are less positive about their finances under Biden than Democrats were under Trump. Both factors contribute to the 18-point decline on this metric among all Americans since 2020. 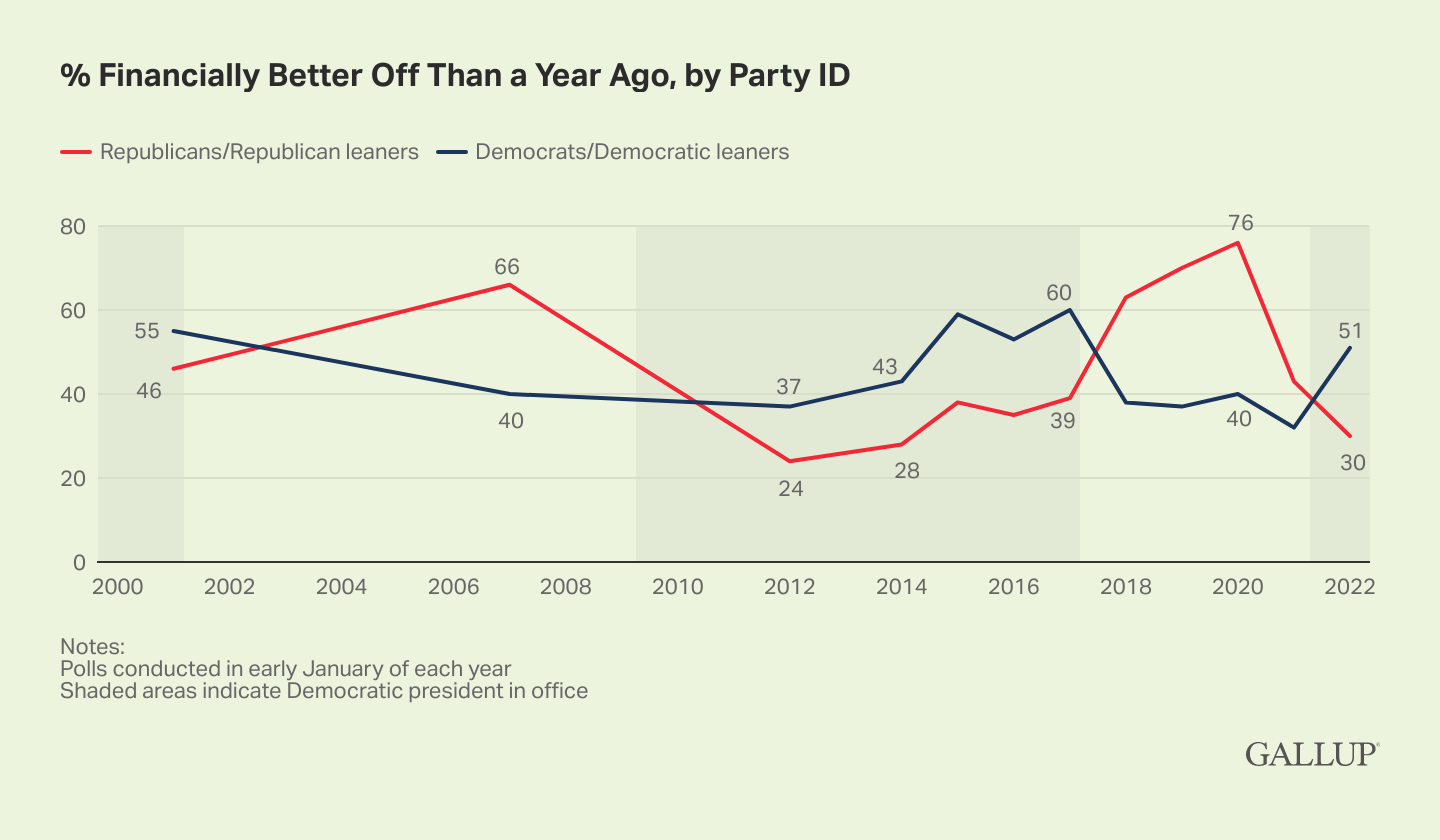 Line graph. Trend from 2001 to 2022 in partisan groups' perceptions that they are better off financially than a year ago. Republicans view on this has varied widely over the years, running higher when there is a Republican president and lower under a Democratic president. The same is true for Democrats in reverse, only less extreme. Currently 51% of Democrats and 30% of Republicans say they are better off.

Outlook for Finances Is Also Partisan

Currently, 74% of Democrats and 48% of Republicans expect to be better off financially at this time next year.

Partisans' outlook for their finances didn't change this year because they had already flipped in January 2021, as Republicans and Democrats were anticipating what conditions would be like under the incoming Biden administration. Republican optimism fell from 84% in 2020 to 49% in 2021, while Democrats' increased from 62% to 72%. 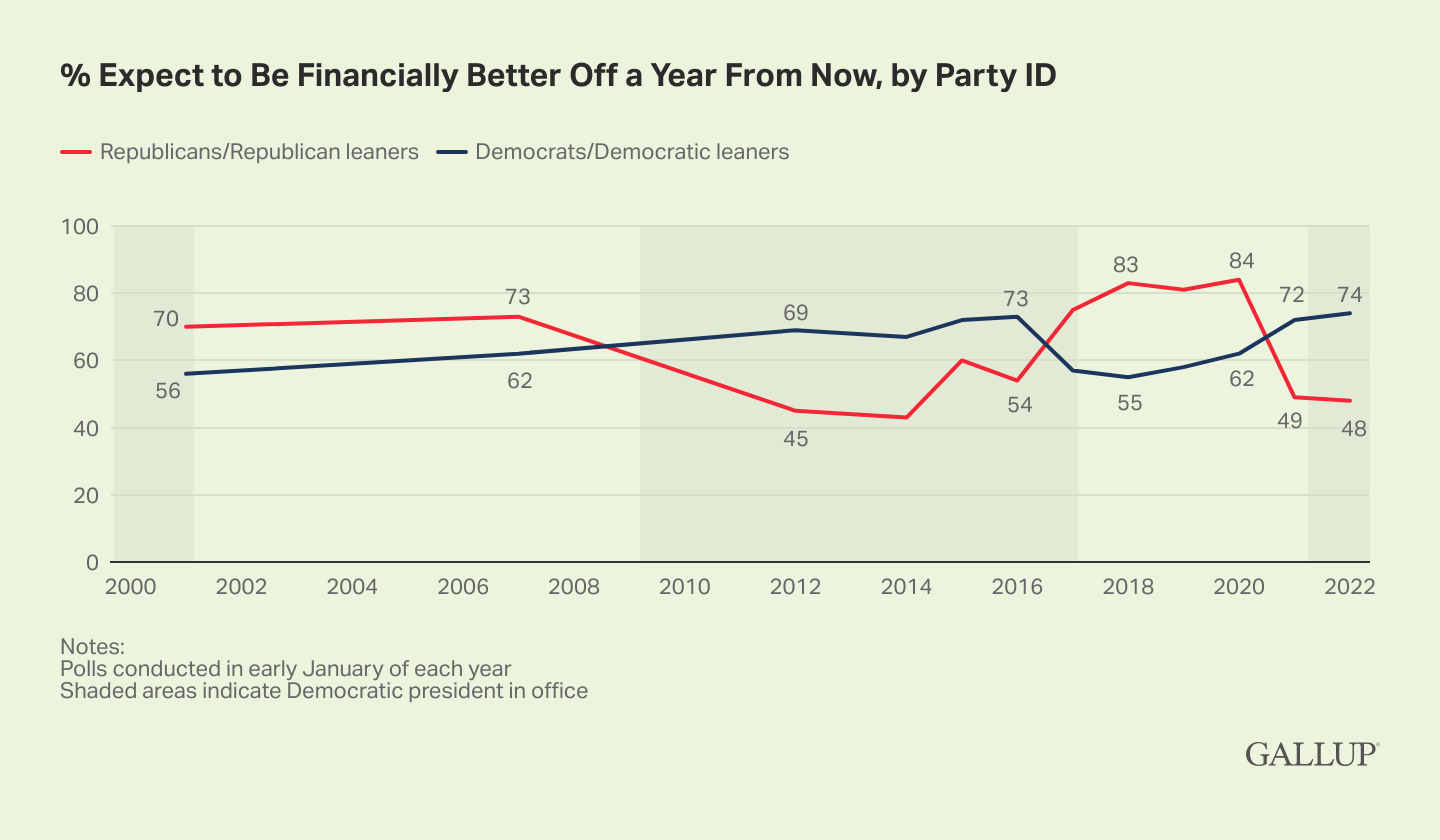 Line graph. Trend from 2001 to 2022 in partisan groups' perceptions that they will be better off financially a year from now than they are today. Republicans view on this has varied widely over the years, running higher when there is a Republican president and lower under a Democratic president. The same is true for Democrats in reverse, only less extreme. Currently 74% of Democrats and 48% of Republicans predict they will be financially better off a year from now.

Americans are not feeling as flush financially as they were in January 2020 when public confidence in the economy was at a 20-year high, unemployment was at a 50-year low and the stock market was soaring. After tumbling in the initial months of the pandemic, people's belief that they are better off financially than a year ago has only inched forward.

Lower-income Americans today perceive real improvement in their finances after their assessment plunged a year ago. These Americans may have been the most affected by the economic shutdowns in 2020 and the resulting spike in unemployment, whereas jobs are now plentiful. Middle- and upper-income Americans have grown less positive over the past year, perhaps because they are more focused on inflation.