WASHINGTON, D.C. -- At the end of President Joe Biden's first year in office, Americans' satisfaction with the government's regulation of businesses and industries has fallen eight percentage points to 28%, the lowest point since 2016 when Gallup first began tracking this measure annually. Dissatisfaction is at a new high of 60% and includes 29% of U.S. adults who prefer less government regulation, 18% who favor more and 13% who are dissatisfied but say it should remain about the same. 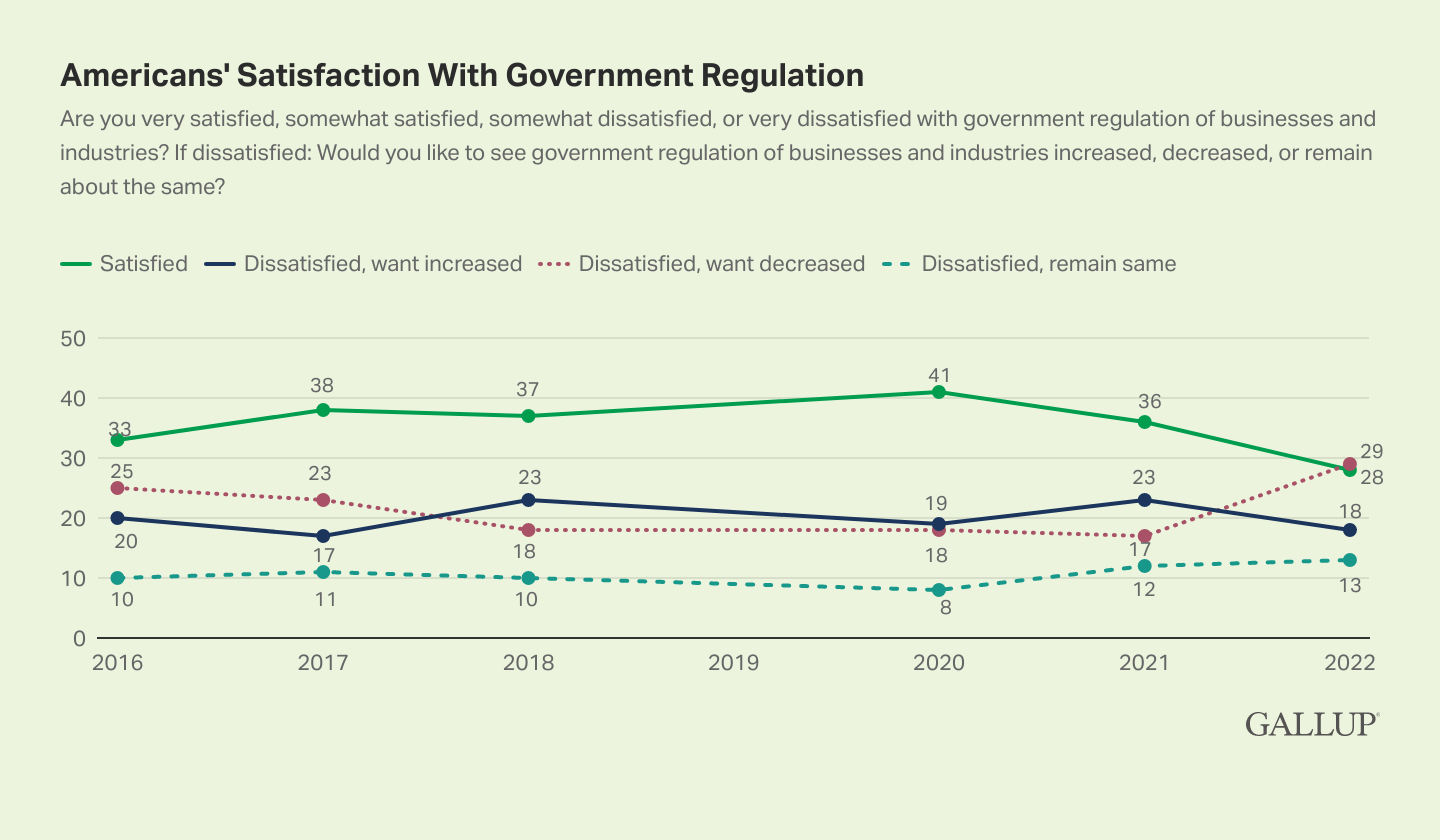 These findings are in line with a Gallup reading in September that showed an increase in the percentage of Americans saying there is too much government regulation of business and industry. The latest data are from Gallup's annual Mood of the Nation poll, which was conducted Jan. 3-16 and tracks Americans' satisfaction with 29 aspects of U.S. society and policy areas. This year's update finds a pandemic-weary public that continues to be largely dissatisfied with the state of the nation.

Donald Trump made deregulation one of his top goals entering the White House and touted it as a signature achievement in his 2020 campaign. The success and economic impact of his 2017 executive order aimed at limiting new government regulations is still hotly debated, but the policy goal was closely associated with Trump. During his presidency, roughly four in 10 Americans were satisfied with government regulation of the business sector, up slightly from the 32% found during President Barack Obama's last year in office in 2016.

Biden's regulatory priorities in 2021 were initially focused on reversing many of the policies of his predecessor. In addition, COVID-19 and its economic effects have been a significant focus of Biden's regulatory actions thus far. He plans to expand upon his work in these areas as well as enact policies to promote economic and racial equity and address climate change.

Majorities of Americans in all party groups are currently dissatisfied with the government's regulation of businesses and industries, however, Republicans (72%) are more so than independents (59%) and Democrats (55%). Since Biden became president, Republicans' dissatisfaction has risen 25 points, independents' is up nine points, and Democrats' is down five points. 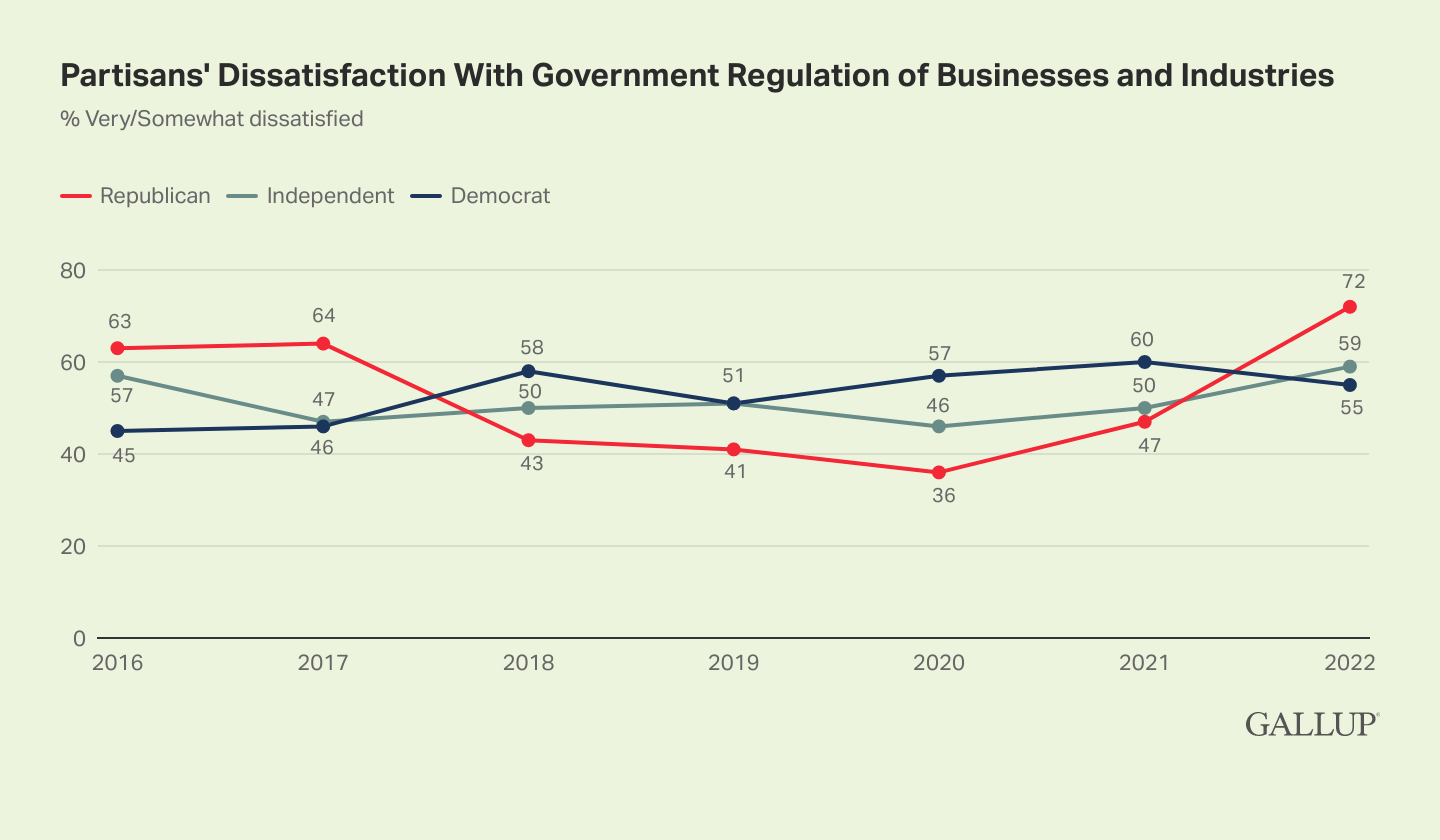 Although majorities of all three partisan groups are dissatisfied with the regulation of businesses by the government, their preferences for the level of regulation are quite different. 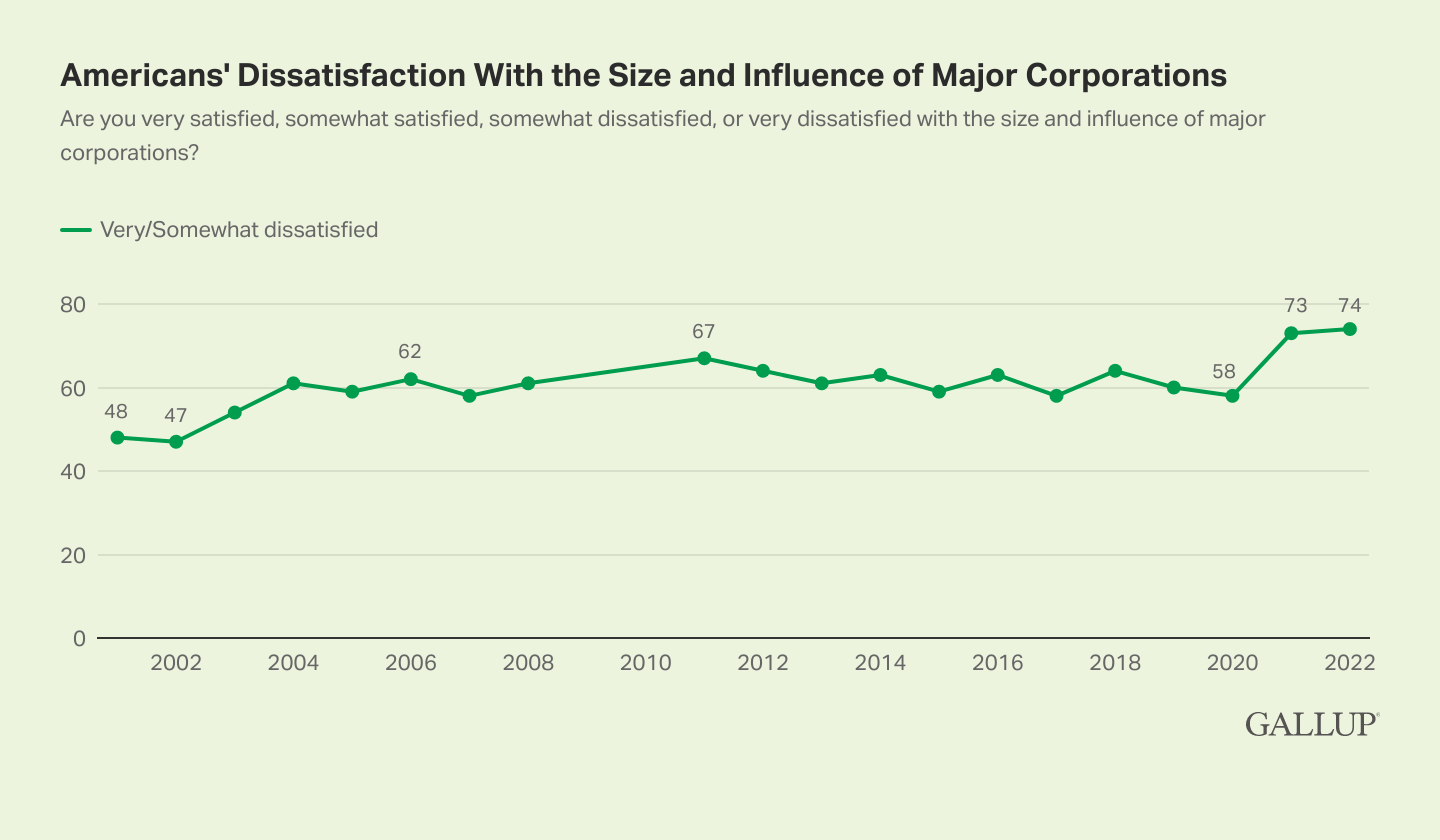 Line graph. Americans' dissatisfaction with the size and influence of major corporations since 2001. Currently, a record high of 74% are dissatisfied, essentially steady from last year's 73%, but higher than the 2020 reading of 58%.

As with government regulations, majorities of Americans across party lines are dissatisfied with major corporations' reach. This includes 67% of Republicans, 75% of independents and 78% of Democrats. While at least 51% of Democrats have expressed dissatisfaction with corporations since 2001, no more than 51% of Republicans said they were dissatisfied until last year, when dissatisfaction shot up from 36% to 65%. 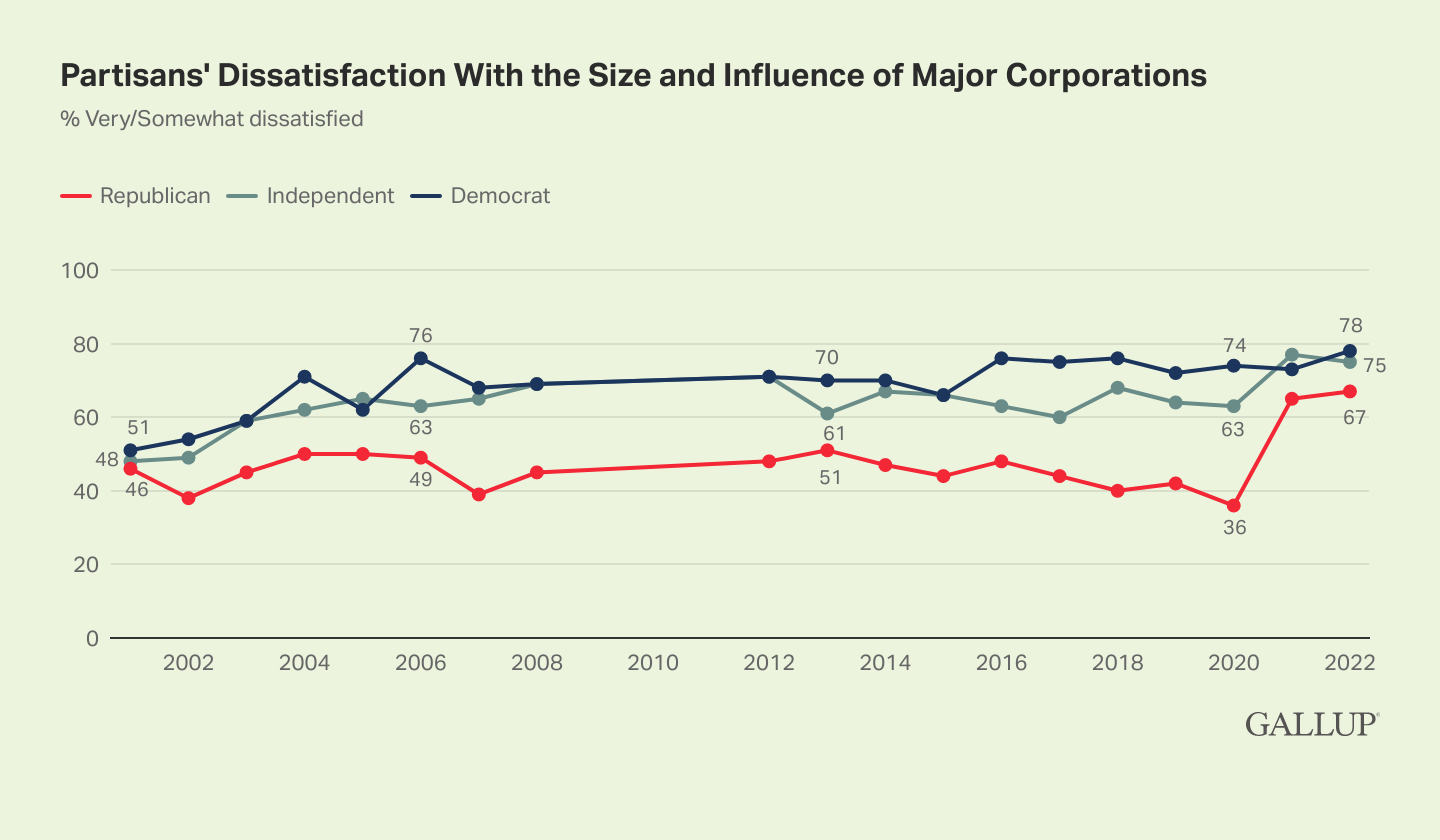 Unlike their views on government regulations, however, partisans who are dissatisfied broadly agree that large corporations should have less power than they do now, including 68% of Democrats, 63% of independents and 53% of Republicans.

Dissatisfaction with government regulations on businesses and industries and the size and influence of major corporations are at their highest points in Gallup's polling. Republicans have become significantly less satisfied with both measures since Biden became president, and Democrats' satisfaction levels have not changed much. Although Republicans and Biden differ in their preferences for government regulation, they could find common ground in their mutual desire to strip major corporations of their vast influence.