WASHINGTON, D.C. -- Americans' agility in responding to changing COVID-19 threat levels is on full display as the world approaches the two-year anniversary of the World Health Organization declaring the novel coronavirus outbreak a global pandemic. After dialing up their social distancing behaviors in January, Americans dialed them back down in February and are now the least cautious they have been since last July. 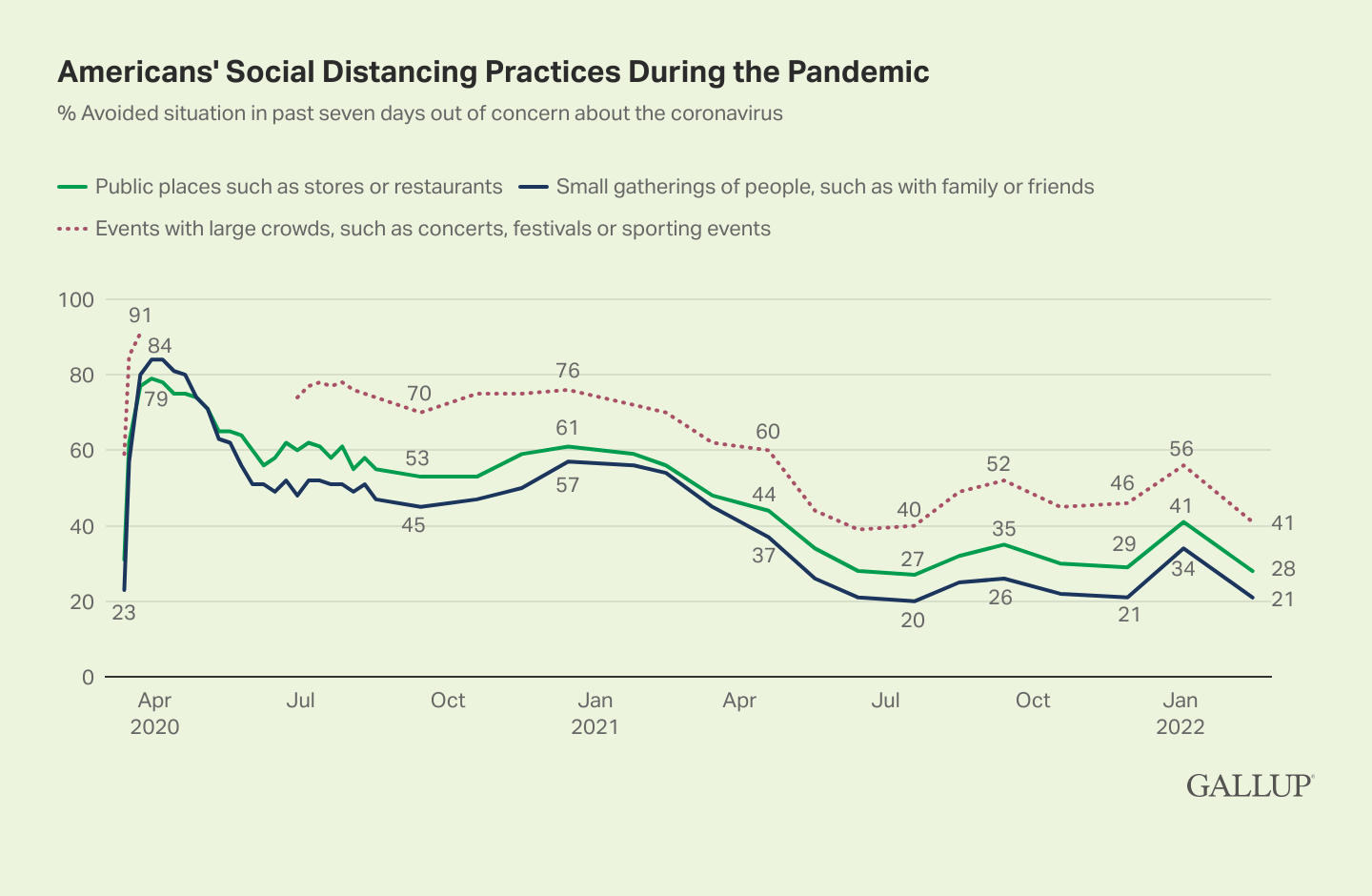 The percentages of adults avoiding events with large crowds, public places such as stores and restaurants, and small gatherings of people all increased by 10 or more percentage points in January as the highly infectious omicron variant spurred record-high cases and hospitalizations, raising public alarm.

With the omicron wave diminishing in February and Americans expressing renewed optimism about the course of the pandemic, social distancing returned to December levels or declined further:

The latest results are based on a nationally representative survey of U.S. adults conducted Feb. 15-23 by web using the Gallup Panel. Americans' reports of their social distancing are now on par with the lowest of the pandemic, recorded last summer before the delta variant wreaked havoc on the recovery.

Less Than Half Not Doing Any Social Distancing

The same poll asked Americans to describe their attempt at self-isolation more generally. Twenty-two percent report that they are completely or mostly isolating from non-household members, and 34% are partially isolating or isolating a little. Forty-four percent are making no attempt at isolating.

While this question was not asked in the January survey (and thus may not capture heightened caution that month), the trend since the start of the pandemic confirms that the percentage of adults following strict social distancing protocols remains near the low point found last summer. 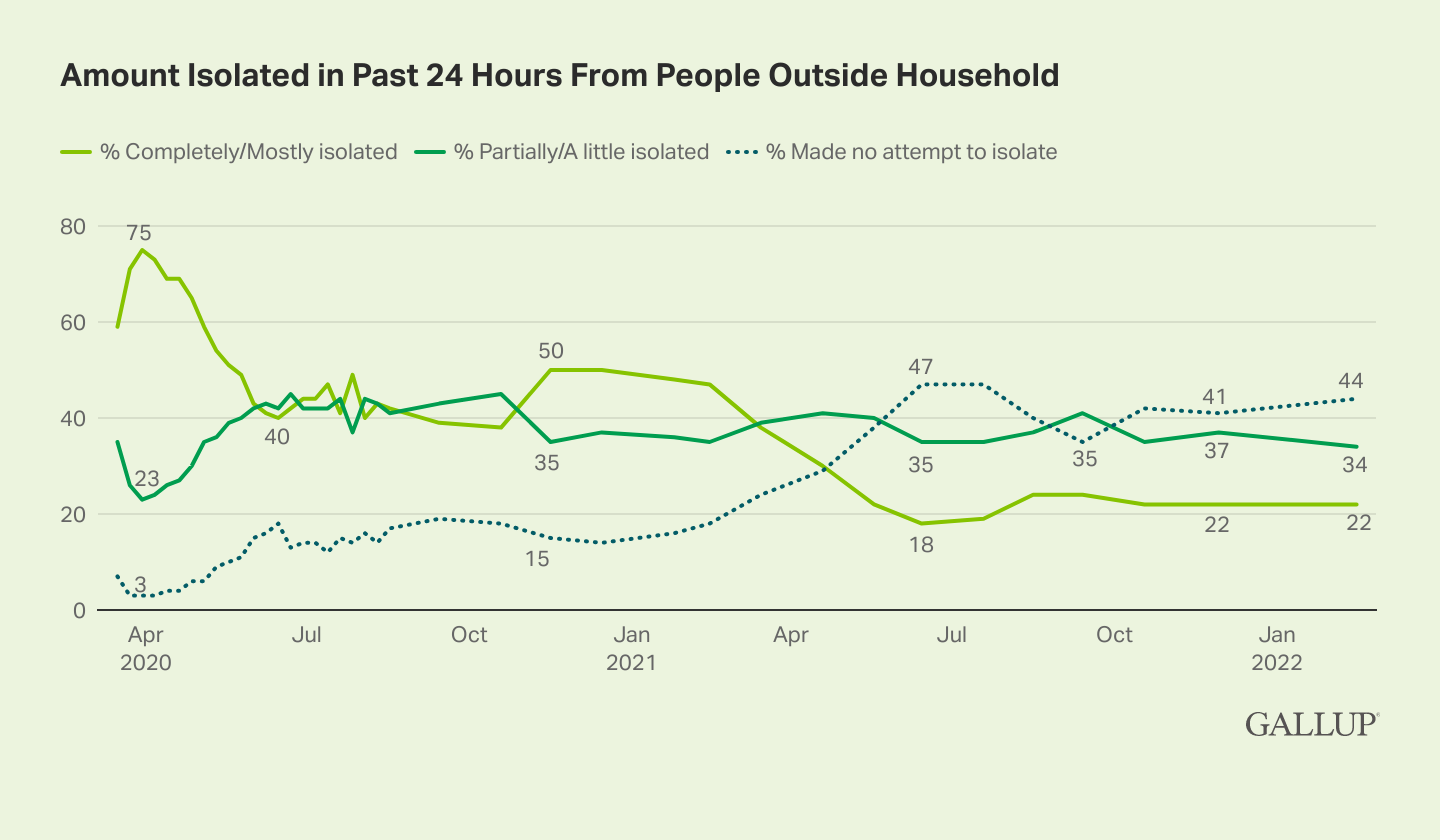 Line graph. Trend since March 2020 in amount Americans are isolating from others. The percentage completely or mostly isolating surged to 75% in April 2020 and then quickly fell to 40% in June 2020. It remained in the 40% to 50% range until early 2021 but then fell through the first half of the year reaching 18% in June. It has since remained low, including 22% in February 2022. Meanwhile, the percentage isolating a little or partially has been steady near 35% since late 2020 while the percentage making no attempt at isolating has increased from 15% to the low to mid 40s, including 44% in February.

Despite the ups and downs in Americans' avoidance of social encounters, the percentage reporting they wore a face mask in the past seven days when away from home has been fairly steady since last June.

Almost every month since then, approximately seven in 10 adults have reported wearing a face mask when outside their home -- the exception being July, when it dipped to 60%. Since then, the rate has varied between 68% and 73%, with February on the low end of that range. 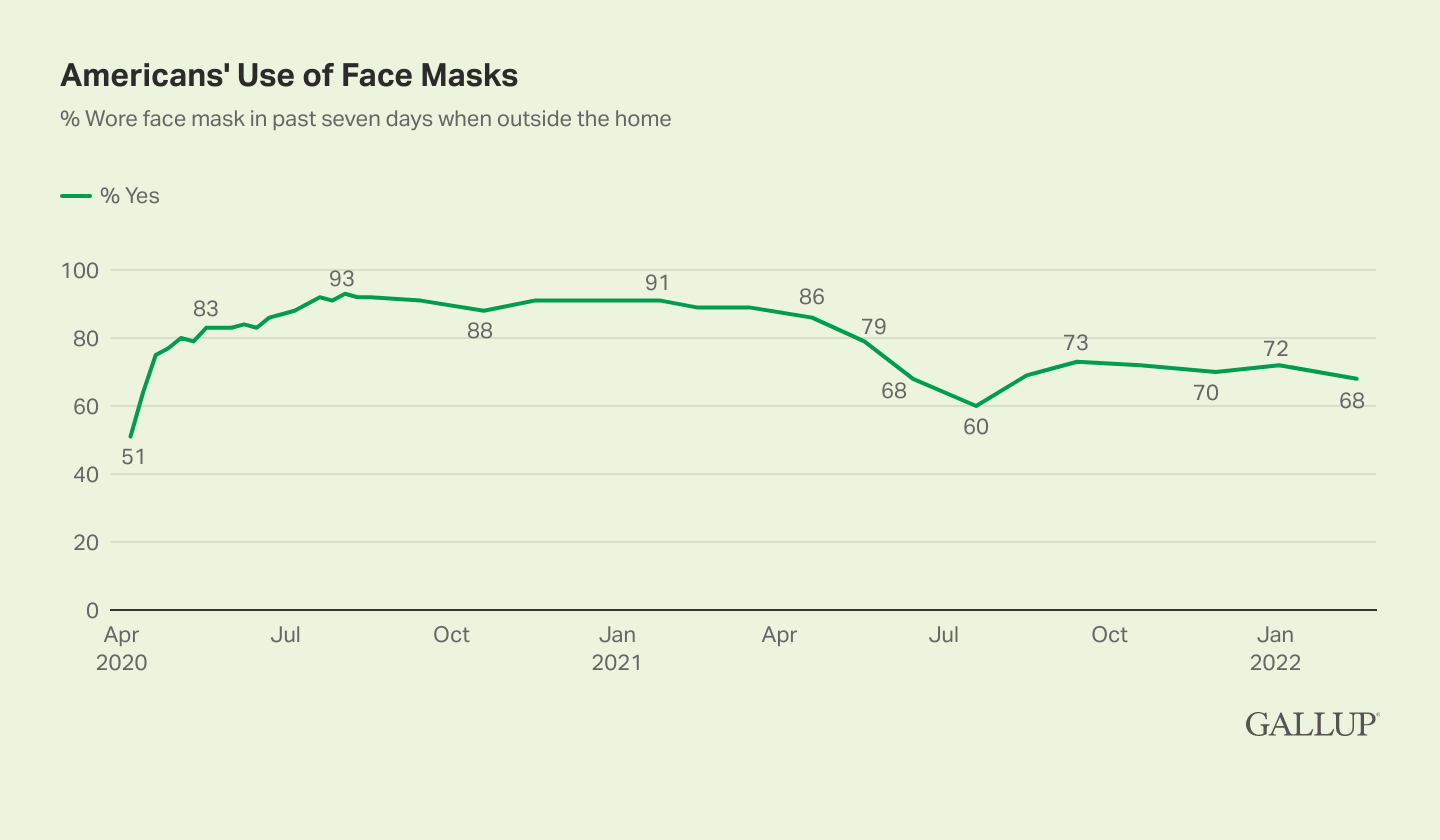 Consistent with what Gallup has found previously, Democrats -- as well as several Democratic-leaning groups (women, city residents and fully vaccinated Americans) -- remain more likely than others to engage in some or all of the four precautionary behaviors.

Americans' social distancing practices have been responsive to reported levels of coronavirus cases throughout the pandemic, and that continues in 2022. Gallup tracking found Americans stepping up their avoidance of social encounters in January as cases nationally reached unprecedented levels due to the highly infectious omicron variant. They then reduced their adherence to social restrictions in February as cases plummeted.

The pattern echoes the situation last fall with the onset of the delta variant, when Americans reported avoiding various public and social settings more than they had over the summer. This too subsided over the next few months. But the latest cycle of intensification of social distancing followed by relaxation was even more compressed.

Such agility in using their social distancing tools could be part of the new normal for Americans as society organizes itself around the recognition that the coronavirus won't be going away for the foreseeable future.

Results for this Gallup poll are based on self-administered web surveys conducted Feb. 15-23, 2022, with a random sample of 2,849 adults, aged 18 and older, and are members of the Gallup Panel. Gallup uses probability-based, random sampling methods to recruit its Panel members.

For results based on the sample of U.S. adults, the margin of sampling error is ±2 percentage points at the 95% confidence level.