From 1975 to 2000, the labor force participation rate -- the percentage of the population that is either employed or unemployed and actively seeking work -- among U.S. women rose dramatically. But at the turn of the millennium, it began to decline and has been falling ever since.

Retiring female baby boomers account for a percentage of the shrinking labor force, as does the increasing number of young women enrolling in college. But these demographics don't tell the whole story. A study conducted by Maximiliano Dvorkin and Hannah Shell for the Federal Reserve Bank of St. Louis also discovered a decrease in labor force participation among women in their "prime age" -- between 25 and 54. The U.S. used to have one of the highest labor force participation rates among women in this age group, but now it has one of the lowest rates compared with eight developed countries in the study.

It is impossible to define one single underlying reason why women are opting out of work. But this slow, steady exodus certainly calls into question the appeal of U.S. workplaces and what they provide for women.

Crucial Findings About Women in the American Workplace

Over the course of nearly a century, women have undoubtedly made progress in American society, but it is not enough. Women continue to drop out of the labor force. Far less than half of women are engaged in their jobs. And only mediocre numbers of women have "thriving" well-being. Given this reality, it is not surprising that nearly half of women say they are looking for or considering new jobs.

The state of women in the workplace has important implications for organizations. Is hiring more women and helping them succeed personally and professionally the right thing to do? Of course. But gender diversity also leads to better business outcomes. Gallup is one of many research institutions that link gender diversity to improved financial performance.

Women in America: Work and Life Well-Lived represents Gallup's latest thinking and insights on U.S. women in the workplace. We have studied what businesses are doing right -- and otherwise -- when it comes to attracting, engaging and retaining their female employees. These analytics and insights focus on all businesses -- those in the Fortune 1000 as well as medium-sized and small businesses.

Gallup has discovered some crucial findings about women in the American workplace:

And here's what we have learned unequivocally: When women want to succeed in their jobs, when they can use their strengths to do what they do best every day, and when they can find synergy between career and life, they are unstoppable. As employees, managers and leaders, they will propel businesses to new heights of success. 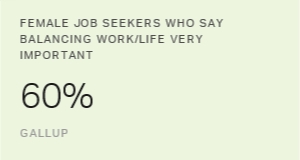 No single explanation can account for the differences in men's and women's paychecks, but two reasons stand out. 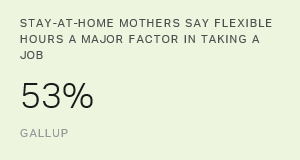 Kids Are a Company's Greatest Competition

One factor has the greatest influence on women's decision to stay in the workforce or leave: children.