A new World Bank report based on data collected in partnership with Gallup shows that 1.2 billion adults worldwide have opened a bank account since 2011, including 515 million in the past three years. Globally, 69% of adults -- 3.8 billion people -- now have an account at a bank or with a mobile money provider.

These numbers are important because bank accounts offer people a pathway out of poverty by helping them invest in education and business opportunities. They also make it easier to manage unexpected expenses -- like a hospital bill or the loss of a breadwinner -- that can push families into hardship.

That's why the World Bank and Gallup work together to collect data for the Global Financial Inclusion (Global Findex) database, which tracks how adults in more than 140 economies use bank accounts, save money, access credit and manage financial risks.

The World Bank and Gallup have updated the Global Findex every three years since its launch in 2011. The recently unveiled 2017 edition offers some new features, including a focus on digital technology's growing role in personal banking.

In this edition, the research team has analyzed the Findex data along with new Gallup World Poll data on mobile phone ownership and internet access. The results reveal digital technology's potential to bring financial services to underserved adults.

Worldwide, 1.7 billion adults do not have a bank account. But more than 1 billion of these unbanked adults have a mobile phone, which potentially offers convenient access to financial services.

Mobile banking does not necessarily require advanced gadgets. In sub-Saharan Africa, for example, about one in five adults use mobile money accounts based on simple text-based phones. Having internet access in addition to a mobile phone only expands the range of possible transactions.

Consider utility payments. Most of us in developed countries probably pay our electricity and water bills through automatic bank account deductions. Many people in developing countries don't have that option. For them, paying bills can require expensive and time-consuming trips to a utility provider's office.

According to the Global Findex database, roughly half a billion adults pay utility bills in cash even though they have a bank account, a mobile phone and internet access. Expanding the use of digital payments could dramatically improve efficiency for both utility providers and their customers.

Another new feature of the 2017 Global Findex is updated data on the link between financial inclusion and the world of work. Drawing on Gallup's data, the Global Findex shows that people's use of financial services varies based on whether they are employed, looking for work or out of the labor force. Key Global Findex variables are now broken down by labor force participation in addition to gender, income, age and educational attainment.

Global Findex data are used to track progress toward the U.N.'s Sustainable Development Goals, as well as the World Bank's goal of Universal Financial Access by 2020. Gallup supports these efforts and encourages researchers and policymakers to explore the data.

Jon Clifton is the Global Managing Partner at Gallup.

Leora Klapper is a lead economist for the Development Research Group at the World Bank. 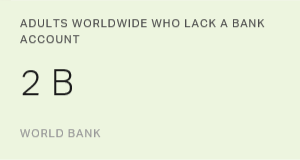