WASHINGTON, D.C. -- Although income inequality remains high in China, Gallup trends show the poorest Chinese are struggling less to afford life's most basic needs. In 2011, 6% of Chinese in the poorest one-fifth of the population said they did not have enough money to buy food in the past year, down from 23% in 2008.

China's poorest residents disproportionately live in the country's rural areas, which have benefited more slowly from the country's rapid economic growth than the major urban centers. Official statistics indicate the average income among rural residents is less than one-third that of city-dwellers -- a ratio some economists believe is understated. However, a notable improvement in the ability to afford food is also evident among rural Chinese -- in 2011, 7% said they had trouble paying for food, down from 20% in 2008.

Access to housing has also improved among China's most vulnerable groups. In 2011, 14% of the poorest Chinese said they did not have enough money to buy adequate shelter for themselves and their families, half of the 28% who said so in 2008. At the same time, 14% of the richest Chinese also had trouble affording shelter in 2011, up from 6% in 2009 -- likely partly because of fast-rising property values in the country's largest cities.

The ability of low-income and rural Chinese to afford food and shelter is likely tied to recovery from the global economic crisis. China's rural migrant laborers -- who typically hold low-income jobs in the cities -- were among the hardest hit in the recession, as they tended to be the first to be laid off. However, these trends may also have been influenced by the Chinese government's concerted efforts to avoid social unrest among those at the lowest end of the income distribution. Poverty-reduction programs -- including a rural subsistence allowance and subsidies to offset rising food prices for poor families -- have been common in recent years.

Results are based on telephone and face-to-face interviews with approximately 4,000 adults in China aged 15 and older, conducted each year from 2007 to 2011. For results based on the total sample of national adults, one can say with 95% confidence that the maximum margin of sampling error is ±2.1 percentage points. In addition to sampling error, question wording and practical difficulties in conducting surveys can introduce error or bias into the findings of public opinion polls.

Adequate Housing Unaffordable for Many Worldwide

At a time of year when thoughts often turn to those less fortunate, Gallup finds the struggle to afford adequate housing disproportionately affects residents in sub-Saharan Africa and the former Soviet Union.

Gallup surveys in 113 countries in 2009 reveal an estimated 1 billion adults struggled to afford food at times for themselves and their families. More than half of adults in 22 countries, 15 of which are in sub-Saharan Africa, reported experiencing such difficulties. 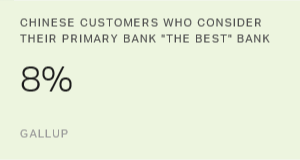 Chinese Customers Aren't Getting What They Want From Banks

Customers in China most want financial advice from banks. Digital expansion is not the solution to engaging customers.