PRINCETON, NJ -- Married Americans spend more than those in any other marital status category, across age groups. Americans who have never married spend significantly less, particularly for those younger than 50, suggesting that if the marriage rate increases, overall spending in the U.S. may increase and benefit the U.S. economy. 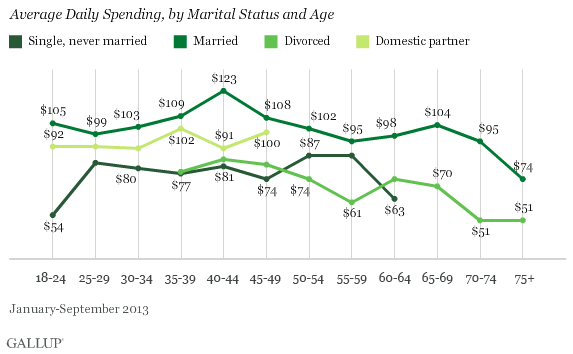 Gallup asks Americans to report how much money they spent the prior day, excluding payments for normal household bills and major purchases such as homes or cars. The figure gives an estimate of discretionary spending. The current analysis is based on January through September 2013 Gallup Daily tracking interviews with more than 130,000 U.S. adults.

The Relevance of Income

Married Americans spend more than the average American in part because they have higher-than-average incomes. Single Americans spend less, at least in part because they have lower-than-average incomes. Those in domestic partnerships spend almost as much as those who are married, but have lower average incomes, similar to single Americans' incomes, suggesting that domestic partners in some sense overspend what would be predicted from their incomes alone. This hypothesis is supported by additional research showing that those in domestic partnerships have a relatively high rate of spending when income and other demographic factors are controlled for.

The U.S. marriage rate has declined in recent years, but recent Gallup analysis shows that it is possible that the marriage rate in the United States will go up in the future, based on a pent-up demand for marriage. Based on the spending habits of married Americans compared with their single counterparts who have never married, such a change could be expected to give a boost to the economy, if those marriages come from the ranks of those who are single/never married. Similarly, an increase in the percentage of Americans living in domestic partnerships as opposed to being single would have an apparently positive impact on the economy. If, however, Americans in the future become less likely to jump from single status to marriage and more likely to move into domestic partnerships, the impact on the economy would be less significant.

These results are based on telephone interviews conducted Jan. 1-Sept. 30, 2013, on the Gallup Daily tracking survey, with a random sample of 135,537 adults, aged 18 and older, living in all 50 U.S. states and the District of Columbia.

For results based on the total sample of 72,106 married Americans, one can say with 95% confidence that the margin of sampling error is ±1 percentage point.

For results based on the total sample of 26,514 single/never married Americans, one can say with 95% confidence that the margin of sampling error is ±1 percentage point.

For results based on the total sample of 4,686 Americans in a domestic partnership, one can say with 95% confidence that the margin of sampling error is ±2 percentage points.

Americans' confidence in the economy improved slightly last week as Washington lawmakers reached a deal to end the federal shutdown and avoid default. Gallup's Economic Confidence Index was -36 last week, up from -39 the week before.